If you fancy a trip to the colder part of the planet where polar bears are an everyday occurrence, then Frozen Queen will be right up your street. The slot offers some sensational game mechanics and features for you to enjoy, so wrap up warm and give this Tom Horn Gaming slot a go.

In the base game you will find that the game area is smaller than you may be used to however it still fits the 4-reels complete with 3 symbols each with ease and gives you 81 ways that you can win. When you reach the free spins, you will see that the screen expands to the regular size and provides you with 5-reels and a far more respectable 243 ways in which you can win. The features in Frozen Queen come in the form of scatter wilds, free spins and sticky wild reels, although the developers have put a limit on winnings to 1152x your bet or up to $115,200 and the RTP sits between 94% and 96%.

The bet that you choose to make covers the entire game area and you have no option available to split the line bet for individual ways to win. Instead you select one of the values that are on offer which range from $0.10 and $100 and you can find the winnings on the pay table as it multiplies the total amount.

In this slot the highest paying symbol guarantees that you will win 32x your bet and as so you can be assured that you have wins on offer of up to $3,200 from each way you can win. Based upon these figures the potential for this slot should be far higher but the developers have chosen to cap it to a maximum win of 1,152x your bet this means that there is no more than $115,200 on every single spin. Technically, the potential should be for you to win at least 7,000x your stake and would have made this a lot more appealing particularly to the high rollers. As it is the pay outs make this an average slot with a medium volatility. 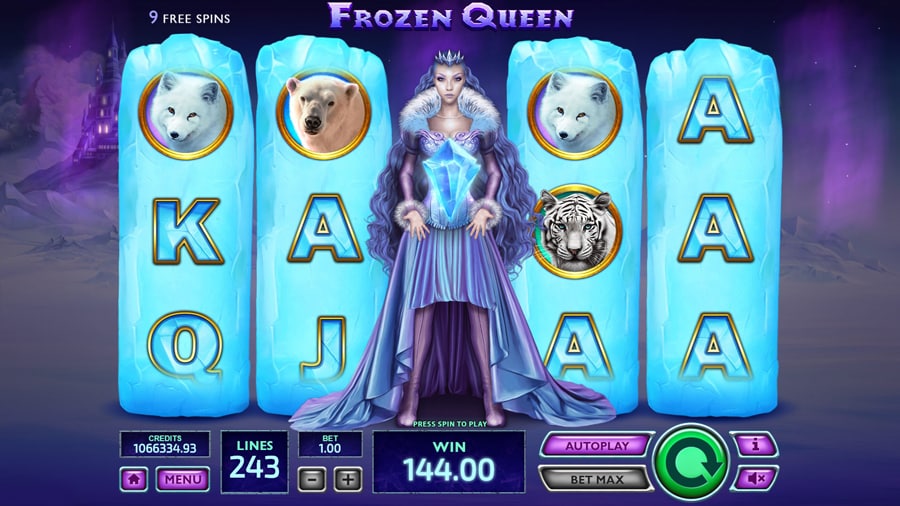 The slot begins as stated above with a 4x3 reel set that you use to play with 81 ways to win. The winning combinations can be created on adjacent reels starting from left to right. You will find that the symbol of a magic crystal will keep making an appearance and this symbol is both the scatter and the wild and can substitute for all of the other symbols and you can also be rewarded with 10 free spins if you land two in the same place on your reels.

You will find that you have huge potential when it comes to the free spins and this is due to the additional sticky wild reel that comes into play. The sticky reel is added to the existing four and this symbol is represented by the Frozen Queen herself and she acts as a wild through the entire feature. The Frozen Queen is the second symbol that can make substitutions and combine with the other symbols to create winning combinations. The additional reel makes the third column and then takes the ways to win from 81 on four reels, to a massive 243 on the five reels.

Chances are that you will already have guessed from the name what to expect, and yes this is a slot that resolves around an ice kingdom with the North Pole styled background image, an ice castle away in the distance and some totally adorable polar bears roaming around. As well as the Frozen Queen and the magic crystal symbols you can expect to see the usually Royal playing cards crafted from ice as well as Siberian tigers, white owls, polar foxes and polar bears.

I found Frozen Queen an enjoyable experience, it was fun and quirky with some thought-provoking mechanics. The game play was easy to understand and implement. If I had to be negative the only thing that out me off was that the developers felt they needed to cap the highest win to 1,152x the stake.