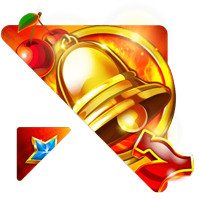 The Wazdan Studio is back with another Hold and Win slot designed to entice players into a classic looking game with modern features and graphics. The Hold and Win format is fast becoming one of the most popular free slot machines types on the market, with developers from Play n GO to iSoftBet and more trying to get in on the action. The main appeal of these games is that players feel like they are much more likely to land some sort of jackpot if they can trigger the Hold and Win feature than in more conventional games.

The features for this game predictably hinge on the central Hold and Win feature, triggered by landing six bonus symbols on the reels at once. Once triggered, players are introduced to two reels sets, one on top of the other. The top reels are locked, meaning players need to land bonus symbols on the bottom reels to unlock them. There are two different types of bonus symbols- the bell and the special bell, which carry different values. The idea is to fill the screen with bonus symbols in pursuit of the Super Grand Jackpot, which is worth 15,000x the stake. However, other jackpots can be won. All features will be explained in more detail later on in the review.

As far as the theme goes for this slot, it couldn’t be more classic in the sense of old-school slot machines from the 90s’ and even earlier. Players are presented with a game that, despite its traditional heritage, looks very modern in its graphics and cartoon-like animations. There is a little bit of originality in that this slot has a particular aesthetic focus on the golden bell in combination with some sort of ‘sizzling’ aspect seen in the flaming background. Apart from these small changes, this slot wouldn’t look out of place in any pub in the 90s.

The background, as briefly mentioned, is the only part of this game that alludes to any ‘sizzling’ part of the game. It looks to be a fiery flame pit with molten embers being dispersed into the air. The deep red colour of the background is a hellish hue that makes this game feel like something you might play when descending through Dante’s circles, really though it is just a very plain red background that lets the board and the symbols upon it take the weight of this slot’s visual appeal.

The board is a golden rectangle with a pitch-black interior that makes the bright symbols pop nicely in contrast.

The symbols for this slot are split into low-paying, high-paying and special symbols. The low-paying symbols for Sizzling Bells are the cherry, lemon, orange and plum. The plum is the most valuable of these, paying out at 1.2x the stake for the top combination. The higher value symbols, on the other hand, are the watermelon and the lucky 7 icons. The specials are a little complicated in this game. They start with the simple wild icon, which is represented by the word wild on a green square. Next is the scatter icon, which is the blue star that triggers instant cash wins when landed in groups of three or more. Then there are the bonus bell symbols, which trigger the hold and win bonus. Finally, there are the sticky bonus symbols, which are also bells.

Sizzling Bells is played on a 5-reel, 3-row playing board with a maximum of 5 fixed pay lines. Players must land three or more matching symbols in paying combinations starting from the leftmost reel to score wins in this game.
The betting range for Sizzling Bells is 1p to £20 per spin. To adjust their bet levels, players can toggle their stake up and down using the tool located at the bottom left-hand side of the screen.

Further information, including a short tutorial and a display of the paytable, can be found via the menu button in the right-hand corner of the screen. The spin and auto spin buttons are located in the centre of the screen.
Volatility for this slot is adjustable. The return to player percentage for Sizzling Bells is 96.2%, which is above average. The biggest payout that players can win on one spin is 15,000x your total stake.

The first feature in this game is the wild bonus. The wild symbol substitutes in for any other symbol barring the specials to help score more wins.

Ultimately, however, players are here to access the Hold the Jackpot feature. Players need to land six or more of the bonus symbols on the reels at once to trigger this feature. When this happens, two reel sets appear on the screen at once, both in a 5x3 format.

Here you are given a series of re-spins, the aim being to get more bonus symbols to fill the blanks on the reels- up to a maximum of 15. If you should fill the top reel set with bonus symbols, you will trigger the Super Grand Jackpot, paying an amazing 15,000x the stake reward.

However, to open this reel set, you need to land symbols in corresponding potions in the bottom reels. The bottom reel set will award you the Grand Jackpot if you fill it with bonus symbols. This equals a 2,500x the stake payout.
Sticky bell symbols also mean that you will have a better chance of scoring these jackpots as some of the bells will stay in position for the duration of the feature. These symbols payout on their own, too, so even if you don’t manage to win one of the jackpots, you may still come away with some decent prizes.

Players familiar with the Hold and Win Jackpot format and like it will have no problem picking this game up and running with it. It’s a classic slot in everything but features, so if you are looking for audacious visuals and novel themes, this might not be the slot for you. Wazdan knows exactly what they are doing here.

Is there a free spins round for Sizzling Bells?

No, we are afraid not.

What is the betting range for Sizzling Bells?

The stake range for this game is between 1p and £20.

What is the return to player percentage for Sizzling Bells?

What is the volatility for Sizzling Bells?

The volatility for this game is adjustable.

for playing with Sizzling Bells: