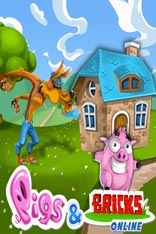 Pigs & Bricks is as the name suggests a new and colourful among the best uk online slots based on the nursery rhyme the three little pigs, and is the new release from the software developers at WMG. The slot machines consists of 5 reels and 10 pay lines where players are transported into the classic fairy tale which sees a big bad wolf blowing down the piggy’s houses.

The background on the screen features a blue sky with fluffy white clouds and stunning countryside. The big bad wolf stands to the side of the reels ready to start blowing the symbols away and he is also the wild in the game and can substitute for all other symbols to create winning combinations, therefore although he is the villain he is a villain that is also on the players side! Players have the choice whether they wish to play with 5 or 10 pay lines and this is determined by the amount they wish to bet on each spin.

The symbols in Pigs & Bricks are all synonymous of the fairy tale and include the three pigs, straw, brick and wooden houses and various other countryside symbols. There are many special features on offer in Pigs & Bricks, the hold feature allows players to take advantage of a free re-spin, wild symbols and a bonus game which centers on the wolf blowing down the pig’s houses for cash prizes!

When it comes to the aesthetics the developers have worked hard to build in the imagery, for example the spin, auto play and bet buttons are all designed in the form of wooden signposts. The reels are designed to represent the windows in a house which is why the wolf can be found blowing on every spin. There is a great deal of humor and effort that has gone into building this game which players will really appreciate it as it is a lot of fun.

When it comes to placing bets the player simply presses the ‘bet’ button and they can then change their coin bet per win line from a minimum up to a maximum, with the maximum bet per game being 1000. Players also have the choice to allow the reels to spin automatically for up to 500 spins whilst they sit back and enjoy the fun in the auto play mode.

Unlike other online slots the player gets to enjoy two spins for every bet, this is because one the reels have spun they get to choose a reel to hold. Players should choose wisely and personally we choose to opt for reels that had wilds or bonus symbols on show alternatively reels that feature the same symbols would be good. Once the player chooses the reel to hold, the wolf spins the remaining reels which provides players with an extra spin for free.

Players that manage to spin three of the house bonus symbols will trigger the bonus game. In the corner of the bonus screen is the energy level of the wolf as he moves through the bonus round. The wolf blows down the pig’s houses starting with the one made from straw, then the wood house and finishing with the brick house. As soon as the wolf runs out of energy the bonus game comes to an end and the player is awarded with a cash prize. When the wolf runs out of energy the game stops and you receive a cash prize.