Wild Pops is the latest release from the developers at Yggdrasil Gaming and is the second slot in the PopWins series to come from the Hong Kong based development team at Avatar UX who collaborates with Yggdrasil to provide Asian styled slot for European players. Wild Pops is created with a genuine Eastern theme and it is refreshing to have a slot that is complete with genuine flavours and sticks to tradition with the plethora of symbols crafted with true Asian style which is complete with expanding reels, multipliers, and a new wild feature.

This is a solid slot which is much improved from PopRocks the first in the series, however, it is similar in makeup and features. There is a possibility that you will feel divided over this slot because whilst several parts are close to the original apart from the obvious changes visually. So, if you are keen to enjoy more of the same such as the expanding reels amidst a blurred background this would be a great choice for you to make. Wild Pops is far more cheerful than PopRocks and has a green feel to it with more personable symbols on the reels. If you are ready to start your journey read on. 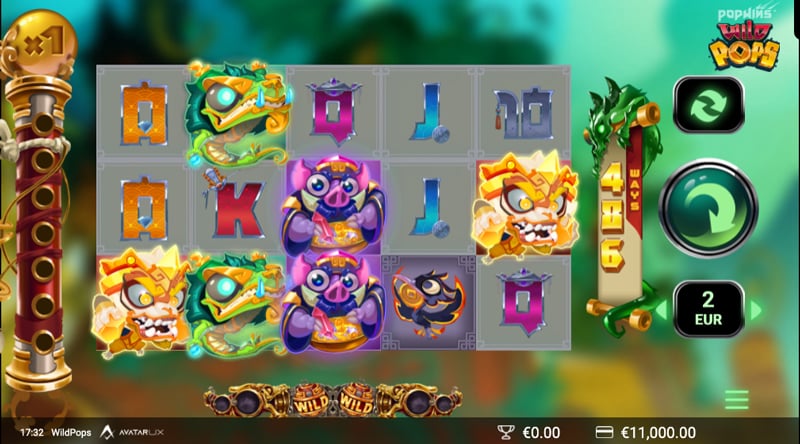 Once you have loaded Wild Pops you need to choose your bet range which starts from as little as 20p per spin up to a maximum of £50 per spin and with this wide range the slot will appeal to many types of player.

The symbols are split into three definitive categories low, high, and super high. The low paying symbols are made up from the usual playing card symbols 9 through to Ace and complete with a printed style whilst the high payers are made up from a collection of seven Asian symbols. The super high category is rather misleading as it only contains one blue dragon worth 30x your stake, and it will only appear from popped symbols. This slot is labelled as a win both ways slot and to land a win you have to land three or more of the same symbols running from left to right across your reels, and when you do the winning symbols pop and two new symbols are added to the reel. This is called the PopWins mechanics by Avatar UX and in the same way as cascading or reactive features it continues to pop creating pay outs one after another until no new wins appear. In this slot the reels do not continue to expand indefinitely and your wins will vary from 486 in the 5-reel, 3-row default setting to yield up to 33,614 ways to win when you have all of the columns complete over all seven rows.

On the outside Wild Pops is like the original, however behind the scenes it is a hugely different matter. The volatility is still high even though the developers have rated it 146 against the original scored at 237 according to the dubious volatility meter. The effect of which you can decide on when you start to play, I did find that Wild Pops was more forgiving than PopRocks as well as being more generous when it came to dishing out the features and although I will not say landing wins is easy, just easier and more forgiving than PopRocks. It is also worth keeping in mind that the developers have seriously cut the potential which we will come onto in a bit, and the return to player is marginally lower standing at 96.2% and this combination provides players with two definitive choices even though at first glance the two slots may appear as one and the same.

With regards to the features, Wild Pops has several, what is nice about them is that they work in total tandem building up to provide great synchronicity. The features begin with the PopWins expanding reels which will award multipliers as well as adding a random wild feature. When Winds first occur, there is a multiplier metre besides your reels, and this rises by the number of symbols that have used been used to create the winning combination. The multiplier starts at x1 and increases on every 7th symbol that you land bye plus one.

When new wins appear the multiplier resets back to x1 and the playing grid resets to its default size. If you get lucky and land every reel with 7 columns high, you will be awarded with three extra lives, basically three free spins. In this slot lives means when no winning combinations land the grid will stay at its 5x7 size but all symbols will be removed to be replaced by a new batch, and the multiplier does not reset between the lives. The additional feature that Wild Pops offers is the random wild. In this lot the wild symbols do not appear organically, instead they appear when players land three wins in a row, and when this happens two wilds are added in random positions on your screen. This feature will usually appear on every three wins so therefore it could appear again on the 6th or 9th win and so on.

If you are a fan of the first PopWins slot you will enjoy Wild Pops immensely. A lot of the gameplay has remained the same, and the slot includes the core mechanics, but the developers have made several alterations so that players will experience a different game when playing either title. In my opinion, Avatar UX has taking the edges off the math model and made it gentler in Wild Pops. Although PopRocks has a far larger potential and symbols that provide higher wins it is also far more volatile with lower pay outs and plenty of dead spins. This slot offers a similar game playing experience, but the features are activated more often, and they last longer thanks to the lives which are explained above.

The potential of wild rocks is 17,707x your stake which is which equates to around a quarter of what PopRocks can provide yet more than enough for most players. The new random wild is a very good addition and it may not sound much but the wilds are so useful and can prevent you from landing a dead spin, and you will appreciate this feature so much more when you have expanding reels in play as your win potential rises rapidly. I really enjoyed playing Wild Pops in my opinion it is better than PopRocks and offers more in terms of gaming. Overall, the game is far more balanced has better visuals and is more fun all round therefore I urge you to give this one a spin.

for playing with Wild Pops: