HomeNewsIntroducing eye of the storm slot 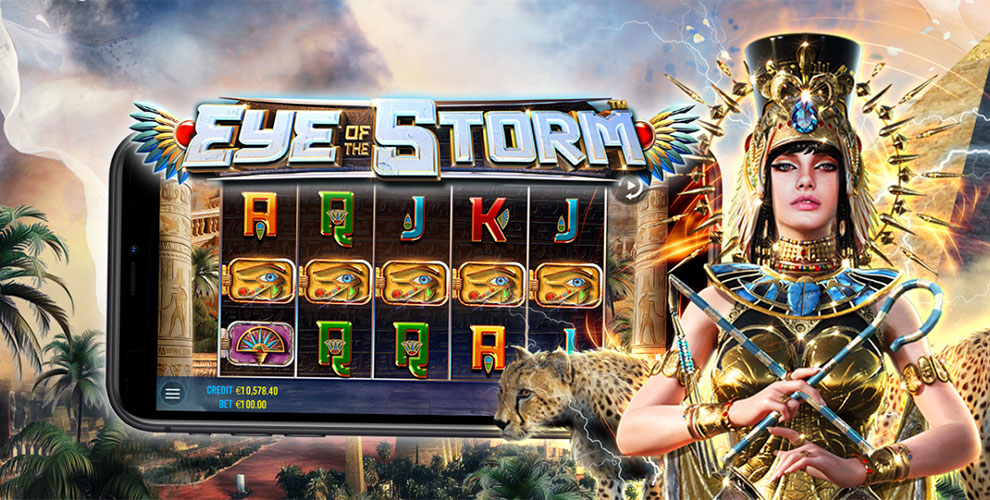 Introducing Eye of the Storm slot

Pragmatic Play have announced they are planning to launch their latest slot, Eye of the Storm on 8th February. For this slot they have collaborated with the development team at Reel Kingdom. The slot is reminiscent of the classic slot Eye of Horus from Merkur/Reel Time gaming which became famous for the symbol upgrade mechanic that plays out in their free spins feature. Eye of the Storm does include this feature which is polished to perfection and makes for some fantastic gameplay.

Ancient Egypt but not as you know it

When you think of Ancient Egypt themed slots you typically expect clear blue skies with the sun shining brightly inviting you to drift down the Nile appreciating all the beauty that surrounds you. However, the clue is in the name, Eye of the Storm as this slot will provide you with a hugely different outcome. Eye of the Storm is heavy with dark clouds rolling across the skies whilst the lightning flashes, creating an ambience of menace and war.

Eye of the Storm is played out using 5-reels and 10 pay lines. The default return to player is a remarkable and generous figure of 96.71%, however despite this the volatility is classified as high. The bet range on offer starts from just 10p per spin and a maximum of £250 per spin which is a bet range that will suit those on a limited budget and keep the high rollers entertained too.

Storm across the Reels

Wins are created by landing three of the same symbols on a pay line and landing five premium symbols will see you being rewarded with 20x to 50x your stake. However, when it comes to the features the one to land is the free spins as these are complete with a symbol upgrade mechanic. You can activate the feature by landing three or more of the scatter symbols which come complete with 12 free spins and a cash injection between 2x, 20x, or 50x, your bet when you land 3, 4, or 5 scatters that have activated the feature.

Eye of the Storm is a superb new slot, and the developers are expecting to receive some great feedback and followers. The theme is portrayed perfectly, and the developers have ensured that no attention to detail has been missed. It is true that many developers have created slots along the same general theme, however this is different to anything else that players may have played before.
This is one slot that will entertain fans of Egypt with the increased return to player also being a huge positive too. Probably the best way to sum up the slot is that it could be compared to travelling to a different world where things are the same but not really.
If you are ready to play up a storm be sure to go to https://pragmaticplaygames.com on 8th February where you can check out further details of this great new slot.