Fans of ancient history and of the movie 300 will appreciate Almighty Sparta, an online slot game from Endorphina. Now, that doesn’t mean any ancient battle will be recreated when you play Almighty Sparta. The game relies entirely on symbols, not actual bloodshed or sacrifice. This 5 reel, 10 payline game pays out left to right as players seek big wins with no frills like bonus levels. But the scatter is quite profitable and the limited bets keep players in the game for a long time. So take some time to learn your history while claiming big payouts in Almighty Sparta. 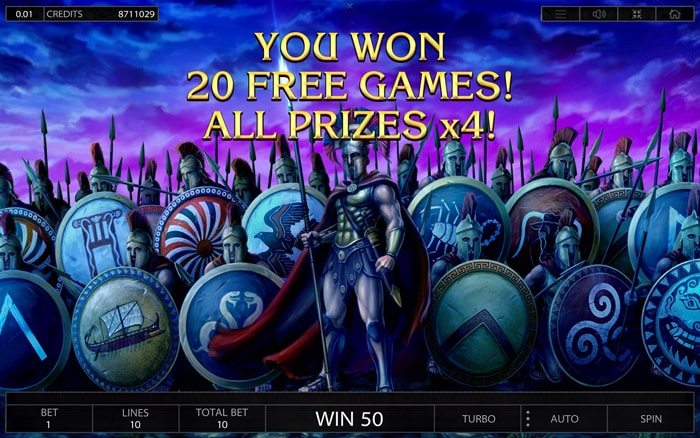 The imagery and key symbols of Sparta is the theme of Almighty Sparta. Notice I did not say anything about the famous battle where the greatly outnumbered Spartans fought bravely to their deaths and inspired an action movie. I don’t say it because there is no battle in the game. No one fights. No warring sides meet in the battlefield. Instead, it’s the images of the war. It’s the key characters (King Leonidas, Xerxes, and the Oracle of Delphi) and battle imagery like the Spartan shield that establish the game’s theme.

These symbols never face off with each other in the game. But fans who love this part of history will appreciate it none the less. Ancient architectural columns surround the reels. And a generic background with mountains and streams meant to copy ancient Thermopylae sits behind the reels Like most Endorphina games, players control both the bet and the lines to determine their total bet. Players can chose both a bet of 1-10 or chose 1-10 paylines to bet on. When players win, they get the chance to double their winnings with Endorphina’s standard risk game. A card will appear on a table. Players then choose from four cards. If the card players pick is higher than the card showing, then players double their winnings. If they don’t beat the card, they lose all winnings from that spin.

Players can choose not to gamble their winnings after they see the card. Almighty Sparta also has the standard Endorphina auto spin. Players hit auto and the game runs without stopping. But be warned, there are no settings that stop the game after wins. So if you want to risk your winnings, you must turn off auto spin.

Almighty Sparta features 12 symbols. The 9, 10, J, and Q all have the same payouts with one key exception: 9’s can payout for x2. A and K double the payouts available from the other royal symbols. The weapons’ payouts for swords and spears are next. The key figures in the story of Sparta offer the highest payouts. Ephialtes (the local resident who betrayed the Spartans) and the Oracle of Delphi (who predicted the fall of Sparta) payout 1000 for x5 on paylines.

The highest payout is for King Xerxes, the King of Persia who defeated the Spartans. Players receive 5000 for 5 King Xerxes. The Scatter (a shield with arrows in it) triggers 20 free games when you land 3 of them. The free games are not played on a special level, just free spins on the standard reels. And Wild Leonide covers an entire reel and can replace any symbol (other than scatters).

Clear animation and game controls are central strengths of any Endorphina game. And that is no different with Almighty Sparta. Don’t count on bonus levels or bloody battles fighting out in front of you. But be assured of smooth game play and big winnings if you play enough spins on Almighty Sparta.