Fans of the ancient civilization of Troy will appreciate Ancient Troy, an online slot game from Endorphina. The slot reel covers about 85 percent of the screen. But the slot reels are all you need to establish Troy and its famous characters, including the Trojan horse. Fans of Endorphina slot games will appreciate the easy to use bet and control line sitting at the bottom of the screen in this 5 reel, 25 payline slot game. And the big, clear dice displaying the symbols are another great plus. So teleport back to ancient Troy with the Ancient Troy Dice Slot game.

The theme of Ancient Troy Dice is in the title. Though like most history themed slot games, Ancient Troy is not looking for historical accuracy. The key characters from Ancient Troy are cartoon themed. Big pillars flank either side of the slot reels. Few events from Troy’s legendary mythology are depicted, though the famous Trojan horse does appear as the wild symbol. Players start the game with 1 million credits. Players control both the initial bet and the number of lines they can bet on. Players play a minimum bet of 25 and a max bet of 250. Players can play an unlimited auto spin level with no strings attached by simply hitting the auto button on the bottom of the screen.

There’s also a turbo option to move the game along quicker. Ancient Troy Dice also includes Endorphina’s standard risk game. Players are given four unturned cards and one turned over card. If players choose a card higher than the one that is shown, their win doubles. If they don’t, they lose the entire win. Players can attempt to double their winnings an unlimited number of times. And players can choose to take a win after seeing the card. So if you can see a king or an ace, you can take your win and get out of there. But players cannot play the risk game while in auto play mode. 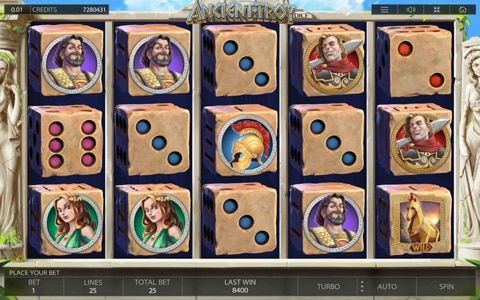 Ancient Troy dice features ten symbols. The lower level symbols are lower value dice. The two and three have the lowest payouts. Four and five are next on the payout ladder. Six is the highest of the lower level symbols. The trojan helmet and swords come in next on the high-level symbol. The Trojan queen and king come next. After them is the trojan soldier. The Wild symbol is the Trojan horse and the best symbols of Trojan mythology in the game. The largest payout comes from landing the scatter symbol, which looks like a Trojan palace. Players who land three or more scatter symbols play the Troyan Jokers free spin game. The Troyan Joker covers an entire reel.