Overview of Arcane Gems from Quickspin

Arcane Gems from Quickspin the Swedish developers invites you to join them on a mysterious walk through their jewel filled slot to hunt for some dazzling gems in this older golden exploration and adventure. This is provided perfectly although the features are modern, they have restrained themselves when it comes to the extras to fuel the action. All in all, this is a solid slot that is an odd blend and as so some things are fabulous whereas others not quite so.

Although I was underwhelmed when I first opened this slot, because slots from this developer are known for being visually stunning, Arcane Gems however just seems to be a little lacklustre. I would not say the slot is bad looking but it is rather round around the edges of this slot. The graphics are rather grainy and portrayed with jagged edges which is not what you would expect from a Quickspin slot. 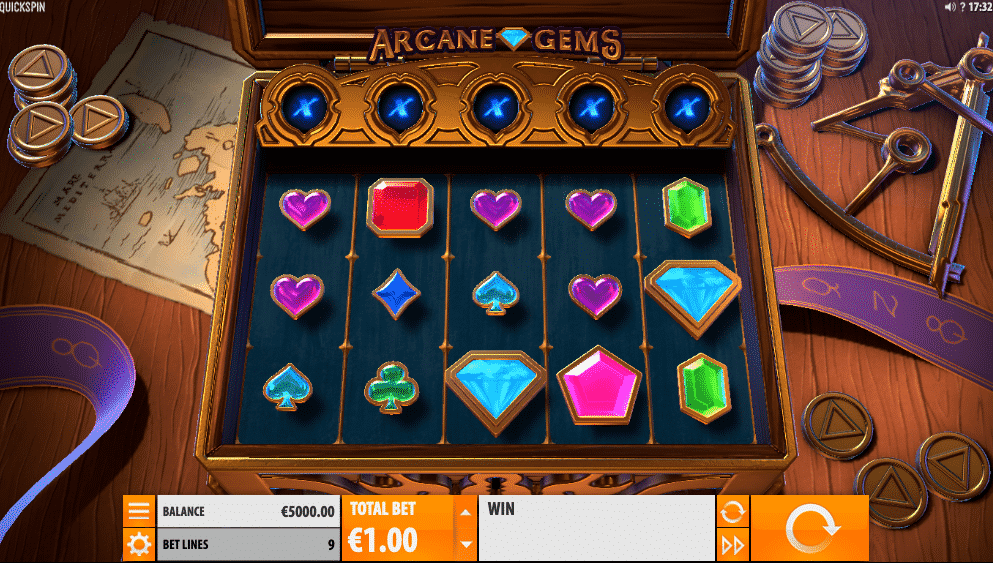 Will the slot be everyone’s Gem?

Everyone has a different taste and it is interesting to see the different takes from player to player, in so much as it would be the same if you were to place an unusual looking box on your friends desk for them to investigate further. That may not make a lot of sense, but you will know exactly what I mean once you have played the slot.

The theme is not clear cut or defined however there is evidence of exploration from the symbols such as the sextant, maps and weird coins that appear all over the game screen.The soundtrack provides further depth to the slot with a piano plinking away in the background, in fact to some degree the soundtrack outdoes the graphics to add the extra ambience. Overall, there is a real air of mystery which is what makes this slot so intriguing when you fire it up for the first time.

The lid of the box on the game screen lifts back to show a 5-reel, 3-row grid and 9 pay lines, which are complete with a row of deep blue crosses on the top of your gaming reels. The puzzle is solved when you land 3, 4 and 5 of the same symbols to create a winning combination. Where this slot is different from the norm is that the winning combinations do not have to run from the 1st reel as you would expect, provided that you land symbols next to each other on any one of your pay lines. This is ideal particularly as this slot does not feature a wild symbol which is known to substitute and create winning combinations.

The technical details are different for this slot the first being the bet where you can choose to bet from 10p per spin up to a maximum of £50 per spin making the slot a good proposal for both low and high rollers. The return to player is a respectable 96.05% and this is heavily geared towards the re-spins. The developers have given this slot a medium volatility that sits at 3.5/5.

There are plenty of gems on the pay table as the name would suggest where all the regular symbols are made up of bright sparkling stones. The low paying symbols are shaped as jewels and made into the card suits, clubs, diamonds, hearts and spaded. The high paying symbols are several gems of different colours such as pink, red, green, yellow, and blue diamond which is the most valuable. The pay outs for the gems range from 0.8x up to x1.4 for landing a lone complete with low payers and x4-x25 for the five premium higher paying symbols.

This slot does not have many features in fact there are just two for you to master, first is the Arcane Lock Mechanics which are activated when you land any winning combination. The feature then locks the highest symbol in place whilst also paying out any win combinations that are in view. You are then rewarded with a re-spin and if you land more similar symbols the same takes place and the re-spins continue until you no longer land any wins.

If you get lucky and land a full reel of locked symbols the Arcane Multiplier feature starts and when this happens you will see the blue “X” above your reels change to display a random multiplier ranging from 2 – 5. This can happen on more than one reel at the same time and when it does the multipliers are added together and the win awarded. If luck is on your side and land all five reels these become stacked and the symbols are locked into place and for this the multiplier can get to x25.

Is this slot a Gem?

Arcane Gems was quite a hard slot to review as there was nothing that immediately shouted out to me, which is unusual for a slot from Quickspin. There are not stand out features or theme that really hooks you in, instead this slot is subtle and not as intricate and whilst it may take a while for you to warm to the simplistic charm, once you do there is no doubt it will become a go to game.
What this slot offers an uncomplicated game play that has a potential pay out of 5,625x your stake, and this is probably a lot more than players would expect. When I trialled the slot, I was happy with the wins I received and these were between x100 – x200 of my stake, however this can amount to x500 of the stake easily.

Arcane Gems is a relatively basic slot which provides a good pace of play. The re-spin feature provides an intensity and can end up giving some bigger combinations, and if you are lucky this can also have multipliers applied on top if your wins.
I found the slot compelling and easy to play, although it does not have much substance it does offer unlimited chances to land winning combinations. This would be a definitely 8 out of 10 from me.