Join the developers at Pragmatic Play on a journey to the lost American civilisation on the hunt for hidden treasures. The slot plays out of 5-reels and offers 384 ways to win thanks to the  unique system that sees that opens up hidden parts of the slot when you land successive tumbling wins, and if you are lucky enough to open everything there is a life changing 7,776 ways that you can win.

Aztec Bonanza shows exactly why numerous slot developers continue to craft games that are based upon the Aztec theme, after all there is so much for them to draw their inspiration from such as the architecture, ruins and art to name just a few. Unfortunately, though Pragmatic Play have not really added enough of the mystery that surrounds the theme to their slot. Although the art in the background of the slot is a reasonable effort, the game screen where you will spend most of your time simply doesn’t really fit in. 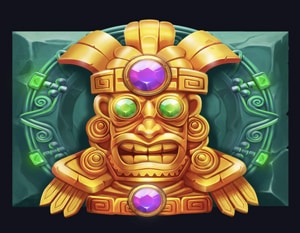 You will not be able to miss the top prize which is on offer as this is on full display on the introductory screen. You will also see that there is a volatility meter shown which stands at 3.5 out of 5 providing a mid-range game but the return to player stands at a respectable 96.53%.

The pay table is a veritable feast of neon and packed full of random symbols that are all in full glow. The playing card suits clubs, hearts and spades make up the lower paying symbols and I am still wondering what happen to the diamond!

Square and triangular symbols make up the mid-range with the three premium symbols represented by the moon, a blue gem and a green orb. The green orb is the most valuable paying out 2.5x your stake. Due to the developers including the cascading wins you will see that there is an abundance of low values on your screen.

Wins are created when you match three or more symbols that land alongside each other on any of your pay lines. When you land a winning combination the symbols which are part of this win are removed and then replaced with new ones to provide you with even more wins and not only can you reap huge rewards but you could land any one of the features that we are going to look at below. 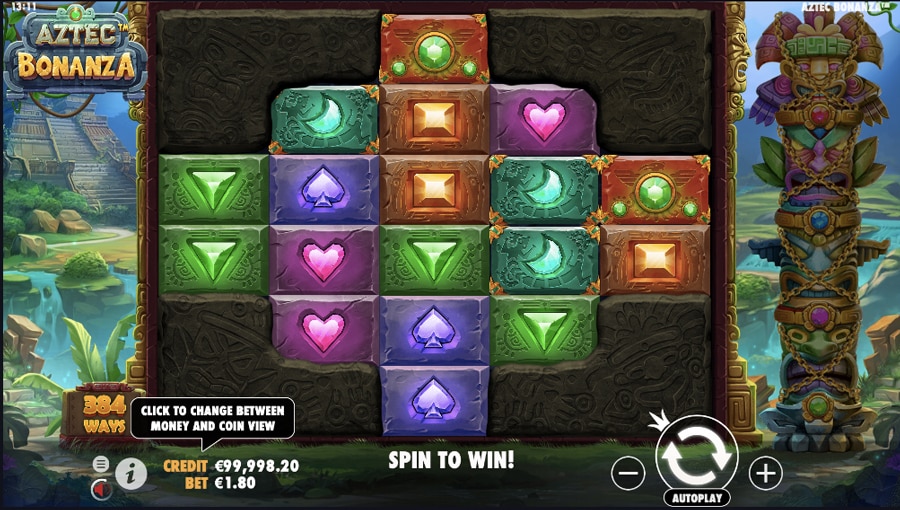 When it comes to the features, the tumble feature works with the symbol unlock feature with every two tumbles that you land removing one of the blocked corners of your screen. When this happens, you have more symbols and ways in which you can win, better still, when you remove a corner block you also activate one of the bonus features.

By unlocking your top left corner, you are rewarded with Mystery symbols being added to your reels. The gold statue with the green eyes is the Mystery symbol and all of these will morph into random matching pay symbols. Unlock your right-hand corner and as many as three of your lower valued symbols change to become higher values. Removing the bottom left block will see your 1st and 2nd reels combine and huge 2x2 expanding symbols can land and unblocking your bottom right block works in the same way but it is your 4th and 5th reels that combine.

Once you have removed the blockers from everyone of your corners and there are no further tumbles possible the free spins feature comes into play. When playing the free spins, you will notice immediately that the complete 5x6 grid stays in play for the entirety of the feature. On entry to the free spin features you have 5 free spins and everyone of these has one of the game modifiers added at random and this will be either the Mystery Symbols, Symbols Transform or Giant Symbols as per the explanation above. The only disappointing thing is that you have no option to reactivate the free spins feature.

When I first played Aztec Bonanza, I was excited and intrigued by the whole set up, particularly as there was some excellent win potential on display. Unfortunately, for me this excitement was only short lived as the slot started to wear thin quite quickly. The first issue from my point of view is that the developers gave this slot the same feel and look as Temple Stacks an Aztec themed game from Yggdrasil. What is worse is that Pragmatic Play really has made no effort to make this a more stand out slot and after a while I was bored rather than entertained.

The next thing I don’t think helps this slot is some of the features really are completely ridiculous. The transformation feature is the best example of this as for the best part of the game this feature is pointless. It annoyed me as most of the time I played I found it missed my 2nd reel which meant I couldn’t form any winning combinations. The few spin feature may hold all the potential for this slot however I found it very flat and far less interesting than the actual base game.

The only thing that saves this slot must be the potential shown in the intro of the slot with promises of winning 19,000x your stake. Personally, I would be interested to know how long you would need to play for before winning big, however, this developer does tend to exaggerate win potential in all their games. In my opinion Aztec Bonanza has set a low standard and the only thing fans of this theme can look forward to is that it won’t be long before new alternative slots will be released.