Moving away from the African Savannah that they dipped their toe in for the second Megaways, they have returned to their roots with their feet solidly on familiar ground with Dragon Match Megaways. While this may seem a little old fashioned initially, there is a surprisingly fun fresh take using an altered, but still popular, version of Big Time Gaming’s engine.

The reels are set in a structure that is in keeping with a Buddhist Temple, with golden dragons entwined around the outer support beams. With 4 main reels that have between 2 and 7 rows at any given time, this slot offers up to 3,136 ways to win, substantially lower than the usual number we see on all other Megaways slots. Don’t be disheartened just yet, there’s plenty more to hear!

As with all Megaways, Dragon Match Megaways being no different, there is the cascading reels feature, which is triggered on every winning combination. This will clear winning symbols and allow for new ones to fall onto the reels and trigger extra cascades. There is no limit to the number of cascades you can have in a single spin so keep spinning to keep cascading! 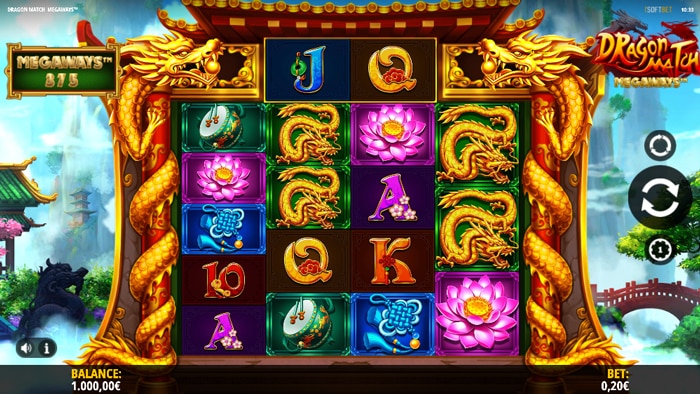 The betting range for this slot is uncharacteristically small for games of today, starting at 20p and continuing up to a mere £20 per spin. This may seem a lot for beginners and novices, however this is certainly not a game for higher rollers, who may be looking to bet £100 plus every spin. If you prefer to bet big, we suggest looking elsewhere.
Regardless of the smaller number of ways to win, the slot hovers around the 96% mark for the return to player and therefore players can expect a good return. The volatility too seems to be relatively high in relation to what’s currently offered on the market today.

With an aesthetically Asian feel to the entire slot, there is landscapes of rocky mountains pushing towards the dreamy sky through clouds of misted air, with ornate bridges and manicured Chinese gardens settling into the middle ground of this slot. It could be considered an easy target for those who hate Asian styled slots, but iSoftBet has gone out of their way to make this a stunning slot, capped off with a simple, relaxed Chinese themed soundtrack.
With the potential of having as few as 8 or as many as 28 symbols on the reels at one time, this slot boast 10 symbols in its pay table!

The lower paying symbols include the royals: Ace, King, Queen, Jack and Ten. These are all decorated with smart little Asian ornaments, offering the player a taste of Asia before jumping into the main event: the higher paying premium symbols.
The premium symbols are beautifully designed, starting with the drum, the blue ornament, the flower, some gold and finally the dragon, all increasing in worth respectively. Since combinations of all symbols can only come in three or four, it should be noted that there is a large variation in this, with quite some significance. For instance, the dragon, the highest paying, pays 50x the stake for four, but only 5x for three.
However, the dragon also acts as the wild and can help by substituting for any other pay symbol, bar the Dragon Match Scatter.

Unfortunately, where it lacks in ways to win, Dragons Match Megaways doesn’t make up for in extras, with only two main features to play with. The first of these is named after the Dragon Match title and comes into fruition randomly when two symbols land on the horizontal bonus reels – the catch is they must be the same. However, when this does happen, they will both become wild, and turn all similar symbols into the two hot spot reels situated below the wilds too!

The second feature for this iSoftBet slot is the Free Spins feature, which is activated when 2 of the Dragon Match Scatter symbols land on the bonus reel at the same time. When this is then launched, players get to choose the rules and the volatility, very much in Blueprint Gaming style. There are a total of 4 options, and if you’ve ever played Buffalo Rising Megaways, for example, these options will feel rather familiar.

The fourth of these is a lucky dip option: it will give you a random number of free spins between 5 and 12, as well as a multiplier between x1 and x5. In some instances this can work out well, giving the player x5 with 12 free spins; however, it can turn out terribly if you’re left with the x1 multiplier and a measly 5 free spins.
Once you start, you’ll soon see the bonus is very much like most other Megaways slots, with winning cascades adding to the win multiplier with +1. In addition, another 2 Dragon Match Scatters appearing in the horizontal reel will add an extra 5 free spins to the total.

iSoftBet should consider shares in an aircraft company with the number of trips they make to the Far East, however every time they seem to come back with a new souvenir for us to enjoy. While this slot does pack a win level in the region of 10,000x+ the stake, this still only gets us to £200,000, nowhere near the level big rollers want to be winning in.
It’s safe to say, this slot is aimed at the beginner and novice ranges, but still offers them some decent sized wins to start them off. While it’s not a bad game, we’re pleased, and pretty impressed, with the new direction that iSoftBet is offering us in recent times!