Fairy’s Luck Slot - Luck of the Irish or Fairy magic?

Whether you believe in fairies or not, you’ll want the luck of them, and the Irish with you in this creatively deigned slot. The main enticement for the player is the incredible Free Spins feature, as well as the stunning Fairy Queen, standing out against the slots design of green and gold in her blue and purple outfit. Greenery surrounds the grid as thought the reels were a wall in a garden. Beside the reels is a small Hobbit-like door, which begs you to visit.

Delve into this game and use your luck to win big. With bright colours and stunning graphics, this slot plays on a grid of five reels and four rows, offering the player 50 ways to win. Players can journey to the Isle of Emerald, where they meet the lucky Leprechaun. If you’re lucky, the gorgeous fairy may peer out to greet you.

The betting range for this slot begins at 50p and increases to £20, giving everyone, no matter their budget the opportunity to splash the cash and aim for the highest wager. This smaller bet variance gives all players the opportunity to vary their bet, meaning more chance of a sizable win!

All of the symbols relate beautifully to the Irish and fayre theme this slot encompasses. The lower paying symbols include the A, K, Q, J and 10, each beautifully calligraphed with swirls and adornments. The stunning colours of green, blue, red, purple and pink respectively add to the brightness of the slot. Higher paying symbols include the beer tankard and Guinness logo-like harp, paying the least, as well as silver horse shoes, a leprechaun’s top hat and finally the Leprechaun himself, each symbol increasing respectively.

The Leprechaun is the most lucrative of the regular symbols. There is also a scatter symbol on offer, which is represented as a bag of gold coins. This can only appear on the first and fifth reels and has the ability to trigger the Free Spins feature. Furthermore there are two types of wild for the player to entertain themselves with. Firstly there is the Magic Wild, represented by a four-leafed clover. This only appears on the third reel and has the ability to substitute all symbols except for the scatter and wilds. The other wild is the Expanding Wild which only appears on the second, third and fourth reels. This is shown as the stunning beauty that is the Fairy. She will substitute for all symbols except for the scatter and wilds.

The Free Spins feature, also known as Clover Games, is activated when a scatter, the pot of gold, appears on the first and fifth reels. Unlike most free spin games, this one only needs two symbols to be triggered. This will award the player with a total of 10 free spins to play. The Magic Clover Wild also has the ability to expand to cover five positions around it, if the edge of the symbol is touching the edge of the Wild Clover. Unfortunately it cannot cover the scatter or fairy. During the Free Spins feature, this can also appear on the second and fourth reels, as well as the standard third reel.

This slot offers plenty for the player to sink their teeth into, with features and magic symbols galore. With plenty of symbols to rotate the reels, this slot offers everyone, no matter their bet or budget, the possibility of playing. Set foot on Emerald Isle and hope to leave with a few extra bucks in your pocket. 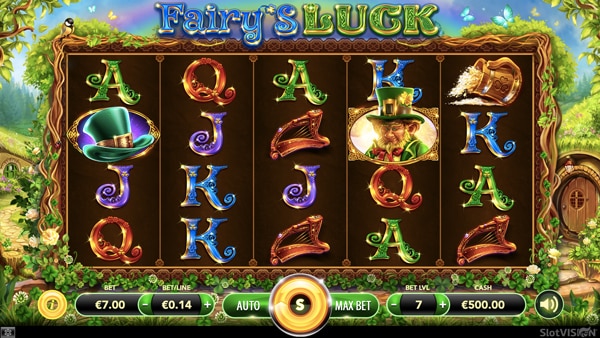