Whether its cutesy lucky leprechauns, or raging barbarians, No Limit City produces some great slots, with this new addition, Gaelic Gold, being no exception. Light-hearted, this offers the players a trip on the reels with a soft and airy slot to play with.
While at first look, Gaelic Gold may seem like a simple slot, the creators at No Limit City have littered the game with plenty of features to make this slot more intricate and appealing. Bringing back their xNudge Wild, as well as throwing in plenty of bonus rounds, the makers made this slot as appealing as they could, and we love it.

The slot reels are set up in the classic 3x3 format, becoming one of the first slots No Limit City has put out to be relatively traditional. There are 5 pay lines for the player to win over, but this expands to 9 during the bonus rounds.
Visually speaking, the graphics are stunning, smooth and appealing to the eye. The Gaelic Leprechaun theme sees the background filled with rainbows, lakes, rolling green hills and striking blue skies. 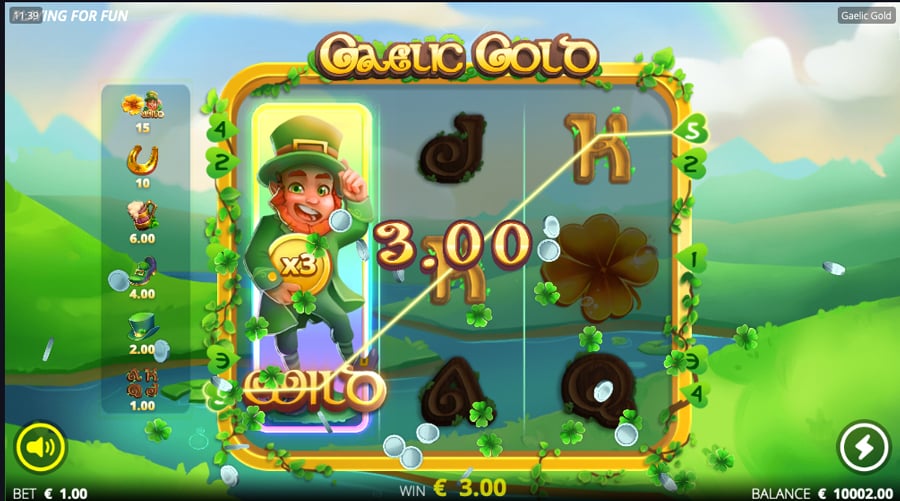 This slot comes complete with a massive betting range that starts at 5p and continues all the way to £100 per spin. This is perfect for all players, as it allows all, whether they are beginners or well versed in the art of slot machines, to bet and win big during their game play.

The RTP is above average, making it higher than we see in most slots, set at 96.15%. This, paired with the medium variance model of mathematics, gives a less brutal edge when compared to other releases this year.
The winning potential on paper is pretty decent as well, with the potential of winning up to 9,837 times the stake. This gives a winning potential of £491.85 and £983,700. Of course this is best case scenario, but in our opinion, this is worth the potential risk of betting higher to try win that incredible max!

The theme of this slot is evident in the graphics, and this carries on into the pay table used for the sot. While they seem like a cliché, they are well designed and can charm even the hardest of souls.
The lower paying symbols are the earthy Ace, King, Queen and Jack; they are stunning in their appearance and bring a folky rustic vibe to the slot. These make up the 4 low paying symbols.

There are then 5 higher paying premium symbols; these are a top hat, shoe, horseshoe, beer and four-leaf clover. Don’t get us wrong, the symbols are a little clichéd, but they fit the slot’s theme and work perfectly on the reels.
The configuration of the reels limits wins to three of a kind, with royals giving 1x the stake back, and premium symbols making 2-15 times for a combination.
There are two other special symbols. The first is the leprechaun, who is presented as a 3-row high wild and pays 15x the stake. He can also substitute for all others except for the bonus. The xNudge Wild, a feature of No Limit City’s slots, makes a comeback, which means wilds can be nudged into full view, with each nudge increasing the multiplier by 1 each time.

Features to win with

If you want to track down the pot of gold, you’ll need the help of the Rainbow Spins feature, which is triggered when a pot of gold symbol lands in the central position on the reels. This awards the player with 5 free spins, but the luck downs end there. The player must select coins to pad out the round: there are 9 coins to pick from.
Two of the coins on offer give you an additional two rainbow lines. Three of the coins reveal up to 25 additional free spins each, while the remaining three coins reveal up to x5 multipliers per coin.

Coins are continually chosen until the Start coin is revealed. The Rainbow lines mentioned are not anything special, simply adding more win lines to the slot to aid winning. However, they are curved and do light up in colourful rainbow shades when landing wins on them. The xNudge wild multipliers are also multiplied by the win multiplier present during the Rainbow Spins.
The player can also choose to skip the base game and launch straight into the Rainbow Spins bonus round if they choose, done via the No Limit Shortcut, costing 50 times the stake to trigger. This also raises the RTP of the slot by 0.05%.

Gaelic Gold may look like a very simple game with a theme that pops up each year, especially around the time of St Patrick’s Day. However, this slot isn’t a bad game at all, with great wins to be had. Beginners and those looking for some fun will enjoy this slot and the features that come with it, but hardcore gamblers may not be willing to take the risk for a potential return that doesn’t quite hit a million.

The sparkling green theme brings back plenty of memories of other slots, with a Gaelic and Celtic revival in recent years for slots. The Rainbow Spins add a little something for the player, especially with the choosing of coins before they start. Either way, this slot has extensive extras which can make the slot very profitable to the right player. Similar situations can be found in slots such as Secret of the Stones, which offers a similar slot in terms of theme, the Gaelic Celtic theme, but completely different in every other respect to Gaelic Gold.
Part of Gaelic Gold’s charm is that it stands out in the Irish category with the comeback of xNudge wilds and plenty of other things to entertain the player. Whether you think you could win the big bucks, or just fancy something to begin the St Paddy’s festivities, this slot will do the job for you!