Fancy a tequila? In the slot Golden Skulls, you will find that you can never drink enough of the stuff! Particularly if you get to play the bonus feature as you will be faced with an entire set of five tequila shots and then some! So, if you are ready to take on the challenge let’s take a look at what is exactly behind the tequila shots.

The is complete evidence that there is no reason to be afraid of skulls just think about the Mexican Day of the Dead. What’s more golden skulls don’t sound that scary, do they? Golden skulls from the developers at NetGame is their latest slot offering which plays out using 5-reels, 3-rows and 10 pay lines. Golden Skulls can be played for free or for real money. Whenever there is the option to play for free I urge players to use it as it is a fabulous way to truly learn about the game and how it plays out without having to risk any of your own money and at least when you do bet you will be well informed into how you can win.

There are a number of features on offer in Golden Skulls including a free spin feature where you could win up to 30 free spins, that’s not all though as you also have the chance to activate an additional bonus during the free spins feature. To begin you can activate 20 free spins and during the feature you can uncover some additional extra symbols, which are depicted by five different tequila shots which can act as wilds and give you the chance to activate the Tequila bonus when you land all five. 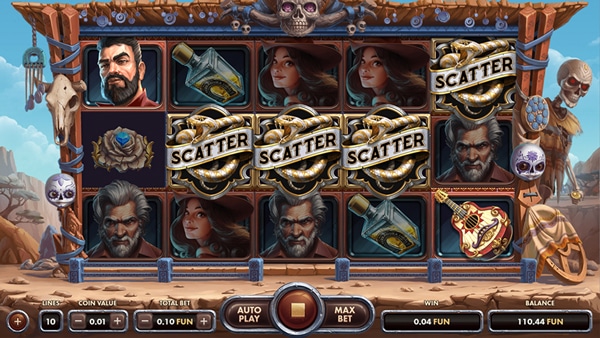 NetGame have created a stunning slot using minimal colours which are predominately dark blue, and sand and they really accompany and complement each other perfectly. The graphics are stunning and very well executed to give a sharp, crisp play. Golden Skulls is a low variance game with an RTP standing at 95.7% which isn’t the greatest but for me the play made up for this. The minimum bet stands at just 10p per spin up to a maximum of £20 per spin, whilst these stakes may not appeal to the high rollers it is play that will suit most budgets. The slot is playable on all devices which is another draw for players as it means that they can play wherever and whenever they want, and players appreciate this with the hustle and bustle of everyday life!

There are a number of bonus features on offer in Golden Skulls which all add some extra substance to the slot. First up is the re-spin bonus and this is triggered when you land three or more scatters. The free spin feature as described above is determined by the number of scatters you have landed. Landing three scatters will reward you with 12 free spins, four scatter reward 15 free spins and five scatters reward the top reward of 20 free spins. The Tequila bonus is triggered when you collect the total of five Tequila symbols during the free spins feature and when you do you will win even more free games.

The Tequila bonus symbol can substitute for all symbols (the same way the wild does) apart from the scatter to create winning combinations. Finally, there is the shooting game which is activated when you land the entire set of Tequila symbols are arranged across your line and you then have the opportunity to win 12, 15 or 20 bonus spins dependent on how well you get on shooting at the lamps and bottles.