Harlequin Carnival is the latest release from the development team at Nolimit City and rolls out their nudge feature which is complete with a new addition which spices up the celebratory atmosphere of this slot. Full of frivolity this is a highly volatile slot that features Harlequin re-spins and bonus game as well as Xnudge wild multipliers so if you are ready to join in the party let’s begin.

Harlequin Carnival plays out over 5-reels and 20 pay line and features the xNudge Wilds and Nolimit Bonus Buy feature. You will be taken into to the world of the aristocracy attending a masked party, but it is worth noting that the slot has nothing to do with Harley Quinn the psychologist who was driven to distraction by the Joker. The Harlequins in this slot Harlequins are the masked character that sport the diamond pattens who add an air of mystery to any soiree that they attend.

Although Harlequin Carnival does not pack the raw punch seen in the slot Barbarian Fury, or the utter chaos courtesy of the rebels in Punk Rocker, it is far more refined and visually delicate which suits the style and the theme perfectly. The game grid is situated on a balcony which is next to a canal with a canopy of fresh flowers. The design is finished off with a keyboard musical score playing an adaptation of Danza Húngara No. 5 in the background, providing the final touch of class. When it comes to music it is a very personal thing and I do feel as though this is the weakest area of this slot and think players will love it or hate it, but that’s up to you and there is a mute button if it all gets too much.

Before you can become one with the action you need to set up your bet amount that starts from 20p per spin to a maximum of £100 per spin which makes the slot appealing to all types of players. There is also the option to spin the reels manually or set up the auto spin which can cover up to 1,000 spins.
The developers have given this slot a 10 out of 10 rating which refers to the high volatility that it offers and this does mean that you may find landing the bonus games a little more effort than in other slots, but the xNudge certainly add life to the base game. This slot is also complete with a Nolimit Bonus buy option which means that you can skip the base game completely. The return to player can vary dependent on where you play, and it has a default setting of 96.14%.ù 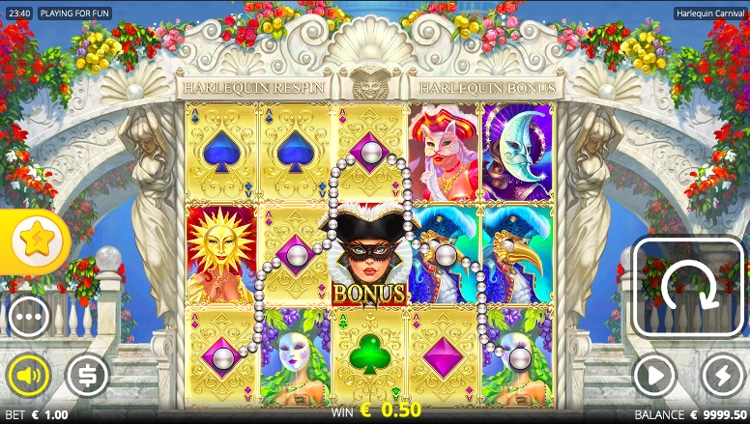 Symbols and how to win

The way to create wins in this slot is to land three or more matching symbols on a pay line. You will come across 9 regular paying symbols which comprise of 4 low payers and 5 high. The low paying symbols are the four paying card suits, clubs, diamonds, hearts and spades and they are decorated beautifully with gold.

The value of the symbols is quite standard and increase with the higher valued wins which are made up by five partygoers all wearing different masks, there is a grape filled one, a red cat, a crescent shaped moon, a beaked plague doctor styled mask and a mask with a golden sun. The winnings these symbols will provide range from 5x your stake when you land five of the grape masks and up to 15x your stake for landing five sun masks. The wild in the slot is represented by the red and black harlequin that is 1x3 in size, the wild can substitute for all the symbols and reward players far more than usual thanks to the xNudge properties.

When it comes to the features it really is all about the harlequin character and he can make two appearances in two different disguises. The first is as the xNudge Wild which can land on any reel and is always fully stacked. If the harlequin only partially lands it is nudged to ensure that the whole reel is covered, and for each nudge the harlequin moves it is multiplied by 1 then 2 and so on. If you land more than a single xNudge wild multiplier in view, the amounts are added to provide you with better wins.
When you land the xNudge Wild symbol the Harlequin re-spins become activated and the number of reels there are to the left are the number of spins you are rewarded with. On every re-spin the symbol moves one step to the left until it reaches your 1st reel and then it disappears.

During the base game spins or on the re-spins you can land the harlequin scatter symbol and this bonus game can be activated in two ways. The first is when you land 3 scatter symbols on a regular spin and the second is when you collect three harlequin scatters during the re-spins. Either way the bonus game starts with you being awarded 8 free spins.
On your first free spin an xNudge Wild starts on the fifth reel complete with a x3 multiplier. For any step it moves to the left the multiplier increases by +1 until it drops off the reels. When playing in this feature the bonus symbols are wild and each one landed reward you with an additional free spin. For every three scatters you land in the feature you will add an additional xNudge Wild to the fifth reel with an x3 multiplier. You must keep in mind that the xNudge wilds that land can still activate the re-spins so this can work out to be highly lucrative indeed.

Once again Nolimit City have produced an entertaining slot and Harlequin Carnival has been created around the power of xNudge Wilds and the different features which gives the game a whole new dimension. Multipliers are always appreciated by payers and these are quite easy to come across. Whilst this slot may not have might not have the physical impact it really holds its own when it comes to the game play and mechanics.

I really enjoyed playing Harlequin Carnival and although it may not be the highest paying slot, I have ever tried the potential to win 5,861x your stake is not to be sniffed at! The math used can make you work hard for the bonus symbols so be under no illusion that the Harlequins will appear that often. However, there are still chances and their contribution make this a highly enjoyable slot to play.