Inferno Star, an online slot game from Play N Go, is a mix of different features for slot games. On one hand, the name and music indicates some sort of space adventure. But other than two symbols, the music, and the bright orange star (also known at the sun) in the background, the rest of the game is standard fare for slot games. The remaining symbols are fruit.

Inferno Star includes few frills, with no bonus modes (other than earning free spins). The 5 reel, 5 payline game allows players to double their winnings or lose it all after each spin as both penny slot players and high rollers bet on this colorful slot game.

The theme of Inferno Star alternates between space exploration and standard casino action. The sun has a dominating presence behind the slot reels. And the music will make players feel like they are in line for Space Mountain at Disney World. But the symbols outside of the sun are fruit, standard for many casino games in Vegas. Players can bid between 0.05 to 100. Experienced players may get frustrated with the inability to control anything else outside of the bet. 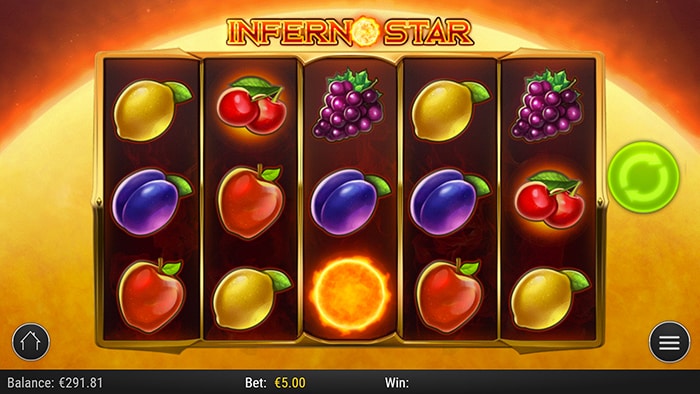 The five paylines are fixed, with the coin value and bet value being one in the same in this game. Players are paid left to right. Players will start with 25000 credits. There’s also a varied autospin mode that works quickly (especially if you turn flash spins on). Players can autospin up to 100 turns, with controls allowing you to stop spins for any win, when free spins are awarded, or win you hit a certain balance. After each win, players get the chance to either keep their winnings or gamble.

If players chose gamble, they play a simple card game. Players will pick either red or black. If they pick the right color card, players double their winnings. If players pick incorrectly, they lose all they’ve won that spin. (Of Note: You must set autospin to “Stop autospin on any win” if you want to gamble while in autospin mode).

Inferno Star features 8 symbols. Six of the eight symbols are fruit. Grapes, lemons, fruits, and apples all feature the same payouts (with grapes offering a payout for 2 grapes appearing in a payline. The cherries and watermelons jump a pay level higher, rewarding players at a larger rate that the previously mentioned fruits. The sun pays out significantly larger than any of the fruit. And the raging sun scatter symbol activates three spins for players.

The theme of Inferno Star is meant to make the inferno star (the sun) rarely appear. The payouts for the sun are significantly higher than other symbols, but it is a symbol does not appear that often. But Inferno Star allows players to bet small as they get their bearings so they don’t run out of credits before seeing a big payout from hitting three suns. Players who want a no frills online gaming experience with simple paylines and big wins that are earned will love Inferno Star. It may seem redundant with no bonus games, levels, or animation, but the colors are bright enough to keep players alert as they play.