IO is the latest slot from the game development team at ELK Studios and is also the second slot to ever use their Gravity mechanic, with IO the arrangement of online gaming shifts and it has been put straight into the territory of science-fiction.

The first slot to use the Gravity mechanic was Cygnus which was a strange slot based in Egypt although it still had an eye up in the stars. IO takes this action even further as it is in the sky amongst the planets, stars and so on. The Gravity mechanic is what causes the symbols to fall at random to the left and right, but you can expect a good range of features too. The trip will take you to Jupiter with IO being one of the moons.

You are not expected to go on a mission the stars and anything else beyond, as this slot is far more amusing and has been described by the developers as a casino space ship on a journey to the front of the solar system. One way you could describe this slot is like Captain Kirk on the Star ship Enterprise, apart from here you are tasked with collecting valuable minerals from the moon. The slot is jovial and there is no doubt you will find yourself laughing out loud along the way.

The slot is played over a grid that is designed to accommodate 6-columns, 4-rows and a massive 4,096 ways to win from the 24 symbols that populate the grid. When you land three or more matching symbols from the first column across you will be rewarded with a win. The symbols can appear on each spin, on any row and be a winner, thanks to the huge number of ways to win. Before you can begin spinning your reels you need to decide on your bet which can be from 20p per spin up to the maximum pf £100 per spin, alternatively you can use one of the developers four bet strategies.

When you land winner, the symbols disappear from your screen courtesy of the avalanche mechanic. When this happens, other symbols move into the gaps to potentially provide more winning combinations. unlike other slots, the columns are not flush so when the symbols fool downwards, they can move into a place on either the left- or right-hand side depending on the gravity. The Avalanches also add an extra row, to a total of eight in height. If you manage to land all 8 rows, the 260, 144 ways to win coming to play. With the avalanche you can also land long chains of winds due to the positions on the reels landing the matching symbols to keep the winds coming. When you have no further winning spins the feature comes to an end. 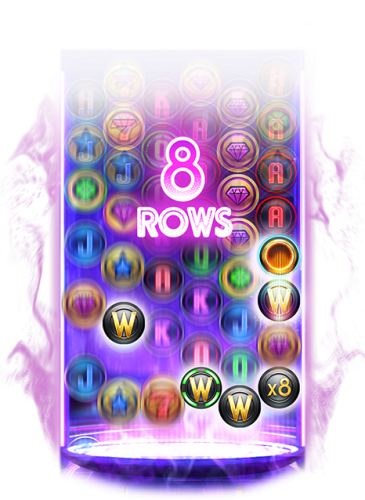 When it comes to the symbols there are eight regular which are divided into low and high payers. You can expect to come across the classic playing card symbols Jack through to Ace, clovers, diamonds, stars, and lucky sevens. The lucky sevens are the highest value and will reward you with 5x your stake for landing 6 of a kind, and this drops to 0.2x your stake for landing 6 Jacks. There are three wilds in this slot, one is a standard wild, and the other are the Forge and Charged Wilds which we will look at below.

The math model in this slot is almost identical to the first gravity slot, however that is not a bad thing as it provides some solid numbers to back up the play. The volatility of the slot has been rated at 8/10, which means it sits in the middle to high range. The hit frequency is slightly higher and stands at 24.6%, whilst the return to player is a little lower at 96%. If you are a player who likes more variance you will be satisfied buy this and the solid potential this lot has to offer.

As noted above, there are two special Wilde wild's that work in conjunction with the standard wild. The first is the Charged wild which begins with four lives. It stays in the game area throughout a full sequence and every time the Charged wild is used as part of a win it loses a life, once all four lives have been used it vanishes from the screen.

Landing the big wins, or precious minerals as these are referred to in this slot require you to land the features. Elk Studios will help you on your way thanks to the laser feature. When you land the laser symbols, they shootout at beam of light destroying themselves and any regular symbols in their path to allow new symbols to full down into the empty spaces. If you are lucky and the beam from two laser symbols intersect, the intersection point will be filled with wilds.

You need to keep your eyes open for the bonus symbols as landing three or more in view will activate the free drops bonus game. You will be awarded with at least 7 free drops to a maximum of 15 when you land 6 bonus symbols in view, you should also be mindful that the free drops can be reactivated to. During this feature, the grid will expand to its full size of 8x8 and any Charge Wilds or Wild Forge symbols stay sticky at the bottom of the grid between spins for the entire duration.

Although you may travel in this game to the frontiers of space there is little to distinguish this slot from Cygnus if you have played this before. Apart from some alterations to the features this slot is like its predecessor, with the math model being almost the same apart from a small drop in the return to player. The potential is the same and stands at 5,000x your stake.
When it comes to the graphics personally, I feel that this slot is not as atmospheric or striking as Cygnus. The only thing that separates the two games is your preference of features.

I can see the Gravity mechanic becoming a series of slots which will retain core statistics and mechanics with just a few tweaks to the game along the way, but there is nothing wrong with this. The really big difference is the general approach that has been taken towards the theme. Whilst Cygnus was a mystical slot IO has a light-hearted story and provides a lot of fun to those looking for a space casino experience which revolves around an exotic moon and collecting precious minerals.