Lion's Pride is one of the latest slots from the creative gamers at Mascot Gaming. Although this is a relatively new gaming company, they are certainly making a big hit as they create their casino games by taking inspiration from the most popular themes. This particular slot is created in the area of Savana in Africa. Amongst the animals, players can expect to see giraffes, zebras and obviously lions.

The game play in Lion’s Pride takes place using a 5x4 box layout with 40 pay lines, with wins being created by landing three or more of the same symbols on one line starting from left to right. Players also have the opportunity to play in the free spins round which is triggered when three or more scatters. During the free spins there will be an additional extra wild stacked on the first reel which stays in place for every spin to help players improve their chances of winning.

The most lucrative pay out comes if the player is lucky enough to find 20 families of lions as these big cats will reward players with an enormous prize that is e qual to x800 times the bet they have staked. 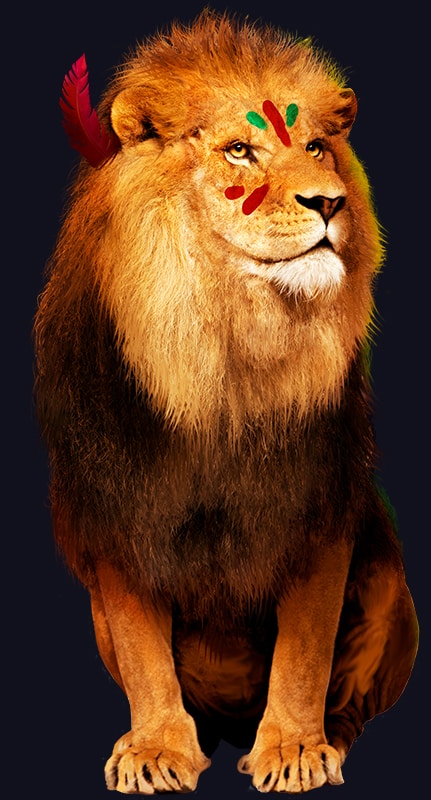 To get started players need to place a bet of at least 40 cents, spin their reels and keep their fingers crossed for a good outcome. Obviously and not surprisingly everyone is aware that the Lion is considered the King of the Savannah therefore it is right that it is one of the most important symbols. When the lion makes an appearance on its own, it will have the value of a wild and can substitute all other symbols to create winning combinations however, when it appears with its “tender” also referred to as its family, it will appear on the reels alongside the other symbols stacked.

This symbol also pays out the most which could be x10 of the bet the player has made every time they land five on a line. There are several other high paying symbols which include a variety of animals, hyena, zebra and giraffe. There is also the usual playing card ten through to Ace which provide lower pay outs, but these symbols are found frequently on the reels.

Players will be glad to hear that there are many bonuses in this slot which give players an even easier chance to win. For starters, the lion symbol has the ability to substitute for all of the other symbols apart from the Gnu wearing the African mask which carries the same value as the scatter, players that manage to land three Gnus will trigger the free spins bonus feature. During the free spin’s bonus feature the wild symbols continue to increase spin after spin in the first reel which makes the win higher for the player. The more difficult bonus for players to land is worth a massive x2,000 of the bet wagered and is won by filling the entire screen with families of lions which would give you double your wins in the base game and quintuple when playing in the free spins feature.

Personally, I really enjoyed playing this slot, the visuals are sharp and slick with the animals looking just as they should. The bonus features are good too and I was pleased to land them a couple of times whilst playing. If this is the standard of game that Mascot Gaming keep producing then it is easier to see why they are surely tipped to become one of the most favoured suppliers.