An overview of Lucky Strike slot

Leander Games has been moving more and more towards front lining the new era of modern slots, taking poll position in the field among other large companies. In the light of this, the team at Leander Games have brought out a stunning new slot called Lucky Strike. Obviously influence by the gem gamers that flaunted yesteryear, both in online gaming and video games in general, such as Bejewelled Blitz and similar, this slot brings it back in a new light.
Is this enough? Is bringing back the past enough to create a special new slot for the player? Unfortunately, the theme is not enough to carry the slot alone, however, the slot has a certain appeal with the entertainment and the game is attractive and interesting.

The system is played on a total of 6 reels and 4 reels. This way of paying is different than we have experienced before. There is a unique way of winning, instead of normal pay lines this slot utilises the scatter wins.
If you want to know what awaits you, then read on below as hidden within the caves of the gems, there are interesting reels, good pay systems in place and wins that will surprise all players. 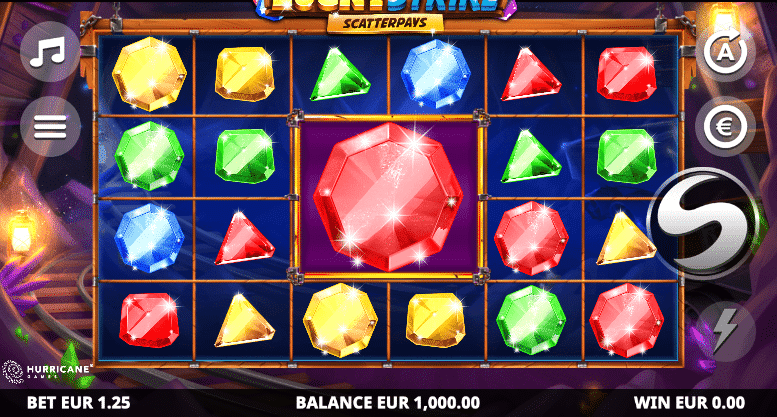 The betting range for this slot is from 25p and increase up to a maximum of £50, which gives the player a reasonable field of movement for their betting fun. While higher betting players might not like the small betting range, but at the same time, the slot is perfect for the smaller betters.
However, the saving grace of this slot is that the return to player (RTP) is above the average that we would usually find in slots of today’s modern gaming industry. It sits at about 96.5%, which is higher than we would expect, and it is a pleasant surprise for us as players. While the return to player is higher than average, the volatility is a little lack lustre settling more in the middle.

Symbols and designs of the slot

The background of this slot shows off an extremely elaborate mining system, which gives the player an exciting backdrop to their exciting game. It also adds to the illusion that there is plenty of gems up for grabs for the player and helps prove to the player there is a number of gems to scatter the reels.
Every single one of the symbols are different, this being in sort and in colour, with icons such as diamonds, emeralds, rubies and more filling the reels in clusters. The colours are so incredibly bright, they blind the player as they play, enticing the player into the slot.

The sound effects that play during the slot, in particular the music which matches the level of the effects, gives the player even more of an enjoyment into the slot. The game is light in terms of animations and there seems to be no need for them in the slot.

Features for the player to enjoy

The main feature of the slot is the massive diamond that can be found in the central position on the main reels. There are smaller ones that are flanked by other ones, which act in sync to launch the main feature that the game comes with: whenever the big symbol matches with smaller ones, a respin will begin to play.

The respin for the slot is set into motion when this big symbol matches with the smaller ones, and therefore, all the matching symbols that were used to trigger the feature are locked in place. If a new symbol falls onto the reels and is the same as the ones that are locked on the reels then an additional new respin is awarded to the player. Meanwhile, as this happens, the multiplier count will continue to keep going up, one step with each win, continuing all the way to five counts. Wins are counted up at the end of every single spin, and there is a technicality that the player could create this respin up to 16 times in a row.

Conclusions of the slot

Lucky Strike gives the player an interesting combination of a relatively classic theme that almost all players know very well. Interestingly, there is a ‘diamonds are forever’ attitude about the slot, with a never-ending theme that will always crop up for the players of slots to enjoy.

While it is a relatively simple game, complete with unimaginative features, but an interesting concept of scatter pays and the individual reels. Perhaps this is not the first time that the player has experienced gems and jewels in a grid slot, it certainly will be the first time that scatter pays, individual reels and more have come together in one slot for the player’s enjoyment.