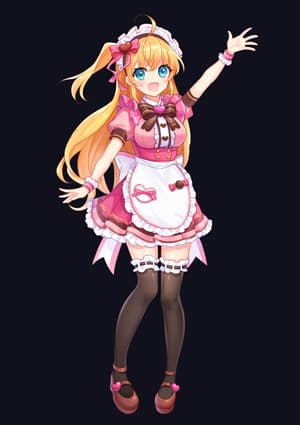 Think about recent slots such as Long Pao, King of 3 Kingdoms and Imperial Riches, all Asian-themed slots. Well, this slot, Magic Maid Café, is NetEnt’s brand new slot that will act a gateway into the Asian culture with their business expansion. If you research into Asia a little, you will find that Magic Maid is actually somewhat a cultural movement.

This cultural movement revolves around young, attractive young women, dressed in French Maid outfits, who stay at certain Maid Café. At these Maid Cafes, women dress in these outfits and treat customers as though they were important people at home in mansions. Now this trend sets its roots originally in anime, where there is often a character who dresses in as a French Maid, and some anime series are based entirely around these maid concepts, inspiring plenty of cosplayers.

Now that there is some background to this unique slot design, lets get into the slot itself. Hopefully, you understand the theme, and once this sickly-sweet concept is swallowed, the rest comes relatively easily for the player.

The slot comes with five reels and three rows, totalling 20 pay lines. The background of the slot is designed as a cartoon café, decked out with pink trim and decorations in the shapes of hearts. Everything about this slot, the graphics, design and all, is aimed mainly at Asian players, and there is definitely a cultural barrier between the East and West; the concept is strange to us, but we are willing to try to see the good.

Veteran gamers who have been in the industry a while will only have to spin a handful of times before they realise this slot is very much a reincarnation of one of the most iconic slots that was ever released – Gonzo’s Quest. Not just the mechanics mirror this, the RTP does too, sitting at 95.97%; the medium to high volatility range is also identical, as is the maximum pay out of up to 2,300 time the bet that the player makes.

NetEnt have brought in brand new symbols for Magic Maid Café, to bring a unique and fresh look to the slot. Three of a kind will grant you a win, when matching on a pay line.

The lower paying symbols for this slot are four different types of comfort food including cakes and cookies, which are worth 0.15 times to 5 times the stake that the player chooses to bet.

The higher paying symbols for Magic Maid Café include three different anime-inspired cartoon females, and the highest paying of theses is the young girl with the pink hair, which is worth a total of 125 times the bet placed when matching five on a pay line.
The mystery muffin symbols is the wild for this slot and can appear anywhere on the reels, strange considering most slots only have the wild on the middle three reels – not that we are complaining. It can also substitute for all other symbols on the reels. 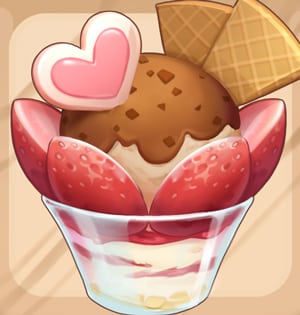 The main feature for this slot is the Avalanche System, which works in a similar way that cascading reels do, if you’ve ever played a slot with that. The main concept is that symbols will fall onto the reels, rather than spin, and winning combinations will be removed from the screen. Symbols will ‘avalanche’, or fall, into the gaps, giving the player even more opportunities to win. The sequences continues until no more winners land on the reels. This feature has an additional feature of multipliers increasing with every avalanche, up to a maximum of x5. This resets to one every time the spins end.

Keep a look out for the key symbols, which will appear on the first three reels of the slot. It acts as the bonus symbol and will reward the player with 10 Free Falls when you land three on a pay lines, or 20 Free Falls, if they appear over separate pay lines; this is something you need to experience to fully understand.

The rules for these bonus games are the same as the main game, but the one exception is that the multiplier will move up in steps of 3, from x3 to x15. These Free Falls can be retriggered within the round if you land three or more scatters on the pay line.

Either way you loko at this slot, the theme is strange and a little too sickly-sweet for us. There is plenty that will appeal to the Asian market, but for the Western cultures, it is strange to imagine young woman walking around in French Maid outfits, serving men as though they were in their own little mansions, but it’s a large feature in the anime community and obviously something that appeals to some. The wins are mediocre, and the design a tad too unique for our liking.