Mata Hari is one of the most famous spies in history and she is now the inspiration for the slot Mata Hari the Spy from the development team at Red Rake Gaming. Mata Hari was a spy in Germany during the first World War as well as a Dutch exotic dancer that spent her time dicing with danger. In this slot she will dance across the reels to help you land a big win but are you right to believe everything she says? 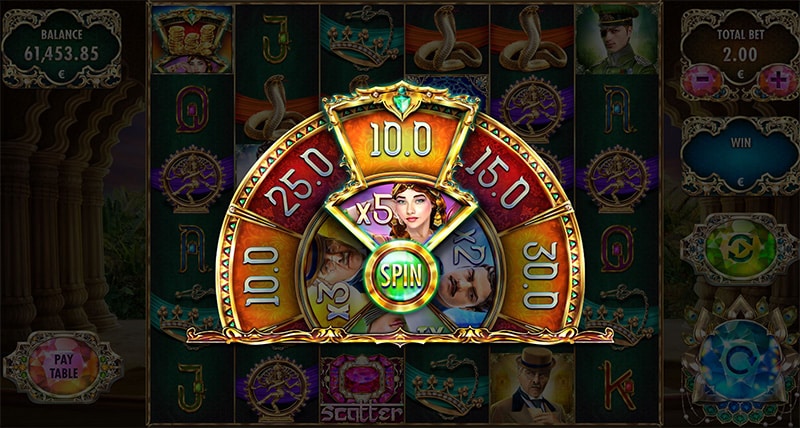 On this occasion it appears that she is being truthful, and this slot is home to an array of captivating bonus features that will have you totally engrossed in her own story. On the 6x6 game set powerful wilds make their presence known and the pink ruby scatters can provide you with 50x your bet. There are several other fabulous features such as the spies roulette, Mata Hari’s eyes, raining veils and a free spins feature that you really need to experience to fully believe.

Mata Hari uses her seductive powers to get close to the politicians and high-ranking military officers in France which allowed her to relay sensitive, top secret information back to the Germans. If history is to be believed Mata Hari was behind the deaths of at least 50,000 soldiers prior to her being sentenced to death by the firing squad in 1917.

This history-themed slot is set amidst a luxurious hotel which would be the type of establishment that Mata Hari would have stayed as a courtesan. Behind the stunning 6x6 game set are the large marble columns and a stunning decorative ceiling which set the scene perfectly. There are also a number of jewelled buttons which display the pay table, set your bet, spin your reels or make use of the auto play function where you can set up to 100 spins and then sit back and watch as the game plays out before you.

On your reels you will come across three military officers as well as Mata Hari, the officers are powerful figure heads from Germany, France and Russia. There are also snakes that slither around on your reels as well as statuettes and broaches which are sure to capture your attention. The symbols are incredibly well designed, but I was a little disappointed to see the low paying playing cards Jack through to Ace included. 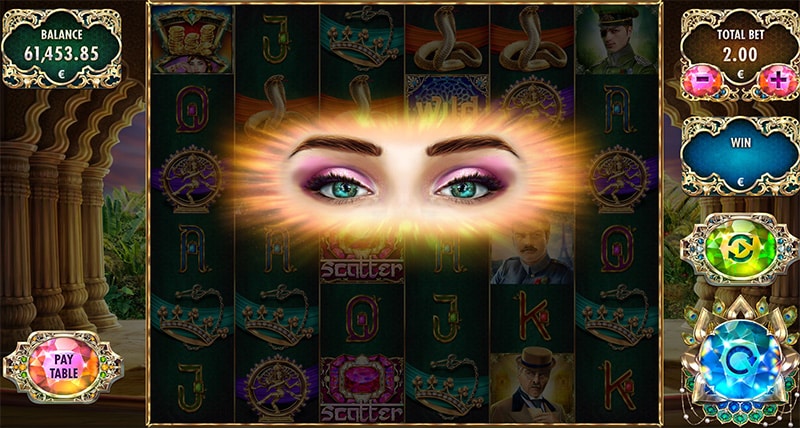 You can play the slot on all devices thanks to the HTML5 and I would recommend that you play the game in landscape mode as the six reel set displays best this way, and the symbols are too small to see if you choose to play on the go using the portrait mode.
You will need to pay to get up close and personal with Mata Hari on your reels and there is no special attention given even if you are a high-ranking politician or able to show your military badge. The slot offers 80 fixed pay lines and 12 generous bet options.

You can play the slot from as little as 0.16 credits which will be ideal for those low stakes slot players. For the higher rollers who are prepared to out their faith in Mata Hari and the promise of the big wins she will bring them can bet a maximum of 60 credits per spin.
The return to player has been announced by Red Rake Gaming as 95.40%. When you combine this with the fact that the slot ranks mid-way on the volatility rating, you can be assured that you will find this sultry seductress totally irresistible.

Features in Mata Hari The Spy

On any spin you could find yourself gazing into Mata Hari’s stunning brown eyes which can make an appearance at random due to the Mata Hari’s Eyes feature. If you are lucky and she opens her eyes for you there are two spotlights that will then cover a 2x2 area of symbols before they morph into

Mata Hari’s Eyes is only one of the features on offer in this slot, next we can look at the ruby scatters which will land on your reels in a flurry of glitter and loveliness and can reward you with up to wins that equate to 80x your stake. There is also the chance that you will see veils drop onto your reels randomly to start the raining veils feature. If two veils fall your wins will be multiplied by four and you will find that three veils always fall in the free win feature which sees your wins multiplied by two.
The free spins feature is activated by Mata Hari dancing on your middle rows of the first reel as this is how the feature is activated. You need Mata Hari to dance on at least two more of your reels with symbols that merged to create jumbo symbols.

There are an enormous 144 free spins up for grabs should you manage to land all six symbols next to one another.
Finally, there is the Spies Roulette, and this is activated when you land the roulette symbol spins and lands on the 1st, 3rd, 4th and 6th reels. Every wheel is divided into two discs, the first contains a cash values, the inner disc features Mata Hari and her military suitors and each hold a multiplier that is applied to your cash win.

When I first saw this slot I was expecting a history themed slot that would potentially bore me to tears, and it is true that most people who had the chance to review the game also felt the same way, and the slot surprised us all, not only was this slot really enjoyable it is beautifully created and provides some really great features and chances to win.
Red Rake have certainly created a stunning game which captures the seductive powers that exude from the famous female spy. All that is left to say is that I hope you have better luck than me and manage to unlock the full 144 free spins.