Overview of Mother of Horus slot

Mother of Horus from Red Rake Gaming takes you on an encounter through ancient Egypt where you will come across Isis who is the Mother of Horus. This is the perfect time for you to spin the reels with one of the greatest goddesses in Egyptian mythology and enjoy the features that she has to offer which include winnings that could total up to 2,500x your bet. The game offers wild substitutions, nudging wilds, a free spin round and a prize bar on top of each reel with various rewards, a free spin round and the mini game complete with four fixed jackpots known as the destiny roulette.

The slot plays out over 5-reels, 3-rows and 50 fixed pay lines. Landing from three to five matching symbols from left to right and wins will be rewarded. When it comes to placing your bets, you can start from just 0.50 credits per spin to a maximum of 35 credits per spin. The slot can be played on all devices that gives you the freedom to play on the go should you wish. I would categorise the slot as a medium variance game and the return to player is a little below the usual average standing at 95.30%. 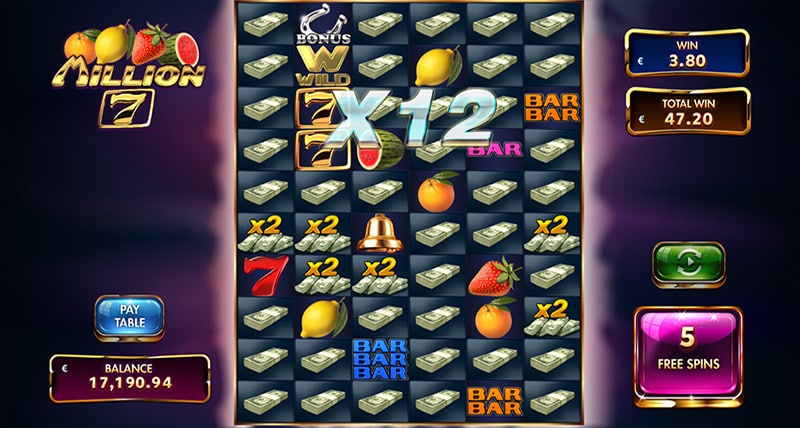 In the background of your game screen there is an Egyptian temple chamber complete with two eternal flames and this is also bedecked with some superbly created with ancient hieroglyphs. Through the open door of the temple you will see the pyramids and the river Nile. There is a soundtrack that creates the ambience of suspense and Isis commands the reels along with her husband Osiris and Horus, her son.

When it comes to the symbols you can expect to see the playing card royals 10 through to Ace and they will reward you with between 0.5x to 0.7x your stake when you land five of the same symbols on the same pay line. These are followed by the higher paying symbols which are the Temple of Philae, pyramids, Horus, Osiris and Isis, and five of these on a pay line and you will be rewarded with between 10x to 50x your stake. Whilst you are playing the base game, Isis will only appear on your 1st, 3rd, and 5th reels however in the free spins Isis can land on any of your reels.

The wild is represented by the deep red flagstaff complete with scarab and can substitute for all the regular symbols apart from the Isis symbol. The wild can nudge up or down once it has landed and then adds more wilds to the respective reel, and it can also add Isis symbols to the active reels on the occurring spin. As the features are activated by the mini reels that are located on the top of your game window, there is no scatter in Mother of Horus.

For gaming development teams Ancient Egypt is a subject that has so much to give and as such there are hundreds of slots of offer at casinos that surround the deities of Egyptian mythology. As this is the first time Red Rake have ever created a slot around Egypt and the mighty Isis, who was the goddess of magic and life, and was said to have protected children and women as well as healer of the sick. When she was not dedicating her time to others, she was the wife of Osiris who she brought back from the dead and mother to Horus.

When you first open the slot, you will see the Upper Prize Bar which is the horizontal set of five mini reels that sit at the top of the game window which is one for each of the main reels. These reels hold various prizes which you can win when Isis lands on the respective reel. The prizes you can win range from 2x to 250x your bet, 10 free spins or the jackpot mini roulette. In the base game Isis can only land on your 1st, 3rd and 5th reels.

Landing Isis and the jackpot symbol on the upper mini reel and the destiny roulette mini game becomes active. This could again provide you with multiple spins of the roulette wheel if more than one Isis symbol line up with the jackpot symbol on the respective reel. When this happens a giant roulette wheel appears with four fixed jackpots the mini which is worth 15x, the minor which is worth 35x, the major which is worth 100x and the grand jackpot which is a reward of 500x your bet, and you will get one spin for every trigger and when the jackpot icon stops on the arrow that is the prize that you will be rewarded with.

Mother of Horus has been well designed although I do think that some of the symbols look rather lost in comparison to the size of the reels but all in all the slot has good animation that flows effortlessly and a soundtrack that suits the theme and finishes everything off nicely. There are a couple of things that I think let the slot down, this is the low return to player and the best medium win of 2,500x the bet. As these are both things that the harden gamblers will look at the numbers may not convince them to give this slot a go.

Overall, I really enjoyed the slot, the game play was engaging, and the mini reels add the additional surprise element. When I played the slot, I landed several good wins and after two and a half hours I had landed just over 250x my bet, which I thought was a great return. I would recommend this slot to all players so give in a spin and it could be lucky for you too.