Multifly from the developers at Yggdrasil Gaming is a high variance slot that provides players with high potential action. The slot has a dreamy wildlife theme that will either play along politely or go completely berserk thanks to the multipliers and high volatility that is on offer. There is a dropdown feature which will provide you not only with cascading wins but all reel multipliers. So, if you are ready to play, read on.

Lizards are not high on anyone’s list of favourite animals unless of course you have singular tastes or are a zoologist. After all lizards have no kind of cuteness factor that is found with puppies, dolphins or pandas. However, the star of the show in this slot is the humble lizard and once you have played a few spins you will see how easy it is to consider the lizard as cute!

The lizards in this slot are chameleons which have the ability to change colour and are cool, but the real attraction has to be that you can see the multipliers pile up which then has a major impact on the outcome of the game. Considering the name of the slot you would think that there would be lots of action and the developers have created this slot which offers features that you can build up and play off one against the other. Read on to see exactly how this slot works. 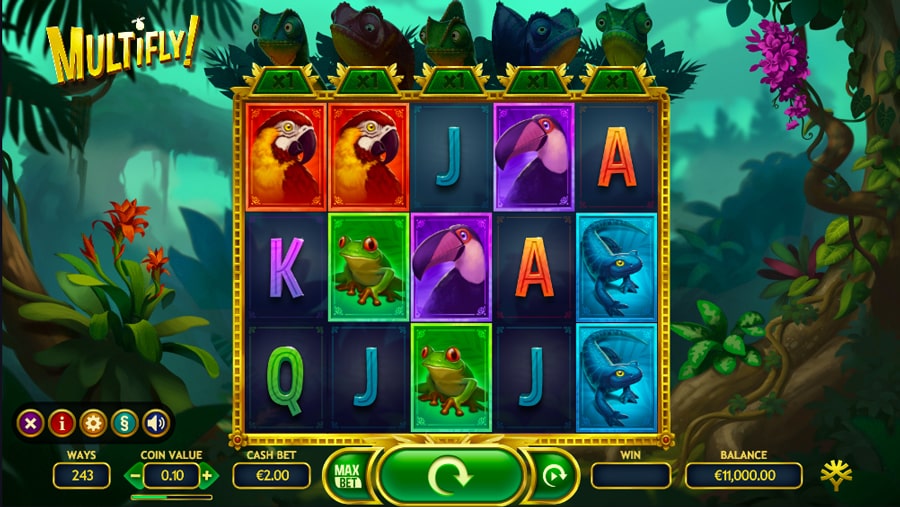 There is a distinct lack of slot games that offer players the chance to play with stacked lizards, but Yggdrasil have managed to do just that with style and ease. This is a good-looking game that takes place in the depths of the wild with trees waving provocatively in the breeze whilst the African up-tempo melody plays along in the background. The reels light up to anticipate wins and the design is of an excellent standard. The real bonus is that this game provides some hefty rewards.

The rules in Multifly are straight-forward and the game takes place over a 5-reel, 3-row set up with 243 ways to win. Providing you land three or more matching symbols starting on your first reel you have landed a win regardless of the row that the wins are on. The math model can change rather quickly as one minute it is happily munching on your coins and next, they have gone into total hiding. The return to player of 96.3% provides dips and dives thanks to the high volatility and a low hit rate standing at 17%.

There are a vibrant, bright bunch of symbols in Multiply which are divided into high and low paying groups. The lower paying symbols are the usual playing card symbols from 9 through to Ace whilst the high paying symbols are reserved for the creatures including a lizard, toucan, frog and parrot which can only be described as an eclectic mix with the most valuable symbol being the parrot and this will pay you 4x your stake if you get lucky and land five matching symbols. Whilst this may not sound great this is a slot that really piles up the winnings, this is partly because when you land the winning combinations, they activate the reel multiplier which will look at next.

When it comes to features Multifly has quite a few to offer and these include a free spin round complete with a multiplier reel that is shown alight above your reels. The most common feature comes in the form of the Dropdown feature and this is just a typical cascading win mechanic where the symbols vanish from the reels and new symbols drop into the empty spaces. This gives you extra chances to win as well as adding wilds to the reels whenever it occurs, and the Dropdown feature carries on until you land no more winning combinations.

Whenever you have a wild in play it will activate the Reel Multiplier feature, and this happens whether the wild is landed at random or added due to the Dropdown Feature. Every reel has its own separate multiplier that starts at x1 and when a wild appears on the reels the multiplier increases by one. Due to the Dropdown feature you can build up multipliers on several reels which are then added one by one to your winning combinations. It is only the reels with winning symbols that will have the multipliers applied. When playing in the base game, the multipliers are then tuned back to x1 with each new spin.

The final feature on offer is the free spins round and this is activated when you land three or more scatters on your 2nd, 3rd and 4th reels and when they do you are rewarded with 10 free spins. The rules then replicate those of the base game, but the reel multiplier feature does not reset during the free spins meaning that the Dropdowns, wilds, and multipliers, can pile up by the end of the round.

I really enjoyed playing Multifly! It is a slot that goes from nothing to everything and back again in a few spins. The high volatility and low hit rate are partially responsible for this, but the main reason is the way the multipliers can remodel the game play. You will soon see that even if your free spins start badly a set of cascades can change things on your last spin. This type of game play can take you in different directions, but you do have to land five of a kind to have this happen.

The real drawback with this slot is that it can become rather repetitive and this is partly due to the bonus game actually being the main game although it has multipliers that do not reset and for players that champion fast playing slots could perceive the slot as having a slow pace as it plays through all the animations every time you land a win and this is something that you cannot skip past.

There is no doubt that Multifly is an entertaining game that offers some ingenious features, however there are various patches where nothing happens and then it all seems a little manic. Multifly will provide a volatile experience and you could win up to 10,000 the stake you are playing.