Prize of the Valkyrie

Prize of the Valkyrie Slot Machine

Prize of the Valkyrie, a slots game created by Live 5 Gaming, places players in a no frills Norse-themed slot game. Other than the Valkyrie striking the stone with her scepter, there really isn’t much in the way of creative animation. But the colors shine brightly and the picture stands clearly has players play this 5 reel, 10 payline slot game. Players bid anywhere from .10 to $500. Paylines are fixed, so players will not have a lot of flexibility in their bidding. But for a simple, 10 payline game, Valkyrie offers big payouts running left to right. And the wild symbols feature high and frequent returns throughout the game. 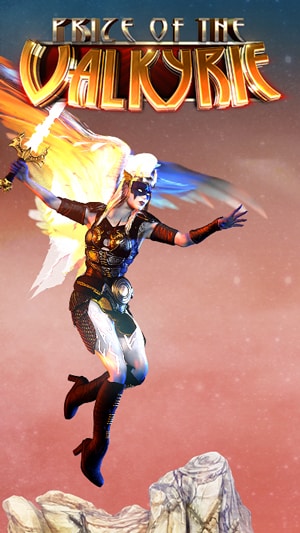 Norse Mythology serves as the theme for Valkyrie, a female figure who determines who lives and dies in battle. And that kind of power shows itself in the Valkyrie’s frequent involvement in the game. The winged, masked figure stands on the left hand side of your screen. The Valkyrie slams her spear into the stone underneath her feet quite frequently during the game. When she does this, a blue orb flashes over a random number of symbols. Those symbols will turn to big winnings as they all transform into the same symbol.

Outside of the Valkyrie and her unchecked power, there’s a simple yet majestic night sky in the background of the slot game representing the northern skies of the Nordic countries. Players open with $1000. Automatic spins can be set up to 100 continuous spins. But players must set a minimum loss and maximum gain that, if either mark is hit, will stop automatic spins. The menu options available on the settings tab in the bottom left corner of the game will give you a quick breakdown of essential information (symbol payouts, paylines, etc.) Click on the question mark in the top right hand corner for a more complete breakdown of the rules as a pop-up on another tab.

Prize of Valkyrie only features eight fairly simple symbols: 4 letters and 4 gemstones. Payouts run fairly low for the symbols, with $10 for a five of a kind for the red gemstone being the highest payout. And the symbols lack variety in their payouts. The J, Q, and K symbols feature the exact same payouts. Letter A doubles its payout for 4x and 5x compared to the to the other letters. But its payout for 3x is the same as the other letters. The green and purple gemstones feature the same payouts other than a $1 increase for 5 purples.

Blue gemstones double the winnings at 3x and 4x the previous two stones. But at 5x, payouts are the same. The wild symbol (the game’s logo) produces the game’s largest payouts. The wild symbol can replace any symbol on the game board and create winnings of up to $125. So overall, the symbols don’t produce a lot of winnings, but they also aren’t high risk. Players should stay in their games a long time. And the presence of the mystery symbol keeps the chance for large payouts throughout the game high.

Review of Prize of the Valkyrie

Overall, Prize of the Valkyrie designs itself to keep players in the game. With its low risk bidding and payouts, players who want to kill time in the day will find Valkyrie the perfect companion. And thanks to the mystery tile, players can still earn big payouts despite the low returns on the small number of symbols. But Valkyrie is not the most varied game when it comes to its visual. The animation by the Valkyrie herself is impressive. But other than that, it’s pretty bland. And players who like the control to change up their betting will not much for them with Valkyrie. But beginning players who prefer a simpler slot game that kills time will love Prize of the Valkyrie.