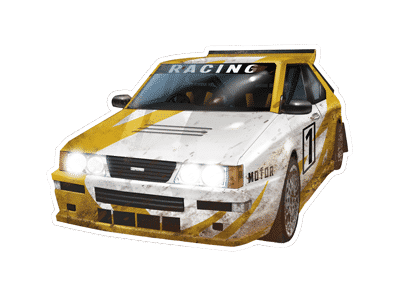 When you think of the word ‘insane’, what image comes to mind? It is usually used to describe something so incredible that it defies beliefs of those watching. If you’ve ever stood by the side of a race track, witnessing first hand a rally car flying through the air, on the verge of spinning off the tracks or racing through the finish line for glory, then you’ll know there is no real other word for it than ‘insane’. The confidence that they show in their driving and the skills they utilize is insane. This is the incredible spirit that the Play’N’Go team attempt to delve into with this racing themed slot: Rally 4 Riches.

Slam your foot on the accelerator, or hit spin, and set the slot spinning into motion with the ultimate goal of landing three of a kind combination. With a 3x3 grid, there is just 5 pay lines for the player to play on, and while this might suggest a less than simple slot, the features really amp up the slot.

Sitting in first-person perspective, looking at the gate with the car noises background, the scenery of mountains and forests lets the player almost smell the crisp clean air flowing down from the hills as you spin.

The betting for this slot is from 10p to £100 per spin, which is a large range for the player to enjoy playing over. Whether the player is looking for a simple spinner or fancies a bigger bet, this slot is perfect for all.
The Return to Player (RTP) is set at 96.25% a little above the average slot, which is great news for the player, and with a toned down volatility of 8 out of 10; this is still relatively high, however, players may not feel as though they are being crashed about in a runaway rally car.

Whether you prefer to bet big or smaller spins are more your thing, this slot offers the player plenty of chances and manoeuvrability with the bet range.

The slot is filled with fruit and cars, which seems like an odd juxtaposition, but let’s explore it anyway. The fruits are used as the lower paying symbols with classics such as lemons, watermelons, cherries, and grapes. The higher paying symbols are the four different cars and these come in various colours and several different eras.

If you used to play the awesome Sega Rally games, then prepare yourself for some delightfully bright flashbacks. The blue car is the Subaru Impreza WRX, and is the most valuable of the symbols, giving the player a total of 25 times the stake when matching three on a pay line. The lowest of the symbols is the cherries and pays 0.5 times the stake for three.
The final symbol is the 1x3 wild that covers a full reel and can substitute for any pay symbol on the reels. 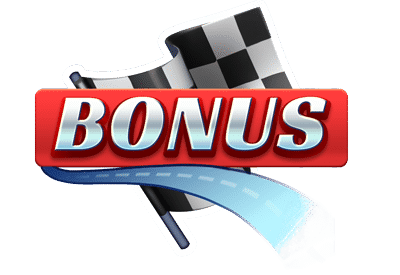 Like rally cars that race, this Rally 4 Riches slot comes with plenty of modifications and features. The first is the Bonus Reel which sits beside the regular reels and is activated on every spin. Through this, the player can land multipliers, bonus symbols and nudge wilds. If the multiplier lands at the same time that a winning combination does, then the value is multiplied by x2, x3, x4, x5 or x10; however, if no win lands at the same time, then the Main Reel Respin feature can be triggered randomly. The bonus reel is held in place for this, while the other three spin.

Any nudge wilds that land on the reels trigger the Nudge Wild feature. This is where any partially visible wilds will be ‘nudged’ to cover the reel. This also increases the chance of getting a Bonus Reel Respin, which almost guarantees the multiplier on the bonus reel.

Landing the bonus symbol on the reels will kick start the Championship Race Bonsu. The game shifts to a race board where there are 25 spaces, giving the player plenty of rewards. Each turn, players can move 6 spaces; they can land on the multuiplier which will pay a cash prize, or a nitro boost, which moves them along the board. By the end of the race, the player’s position results in different prizes:

In 4th place, the player ends the feature and collects the winnings they have won through the Championship Race Bonus feature. Coming in 3rd place will award the player 4 free spins, with nudge wilds active on each of the spins, and only multipliers appearing on the bonus reel. If the player comes in 2nd then the player is awarded 4 win spins, which means that a winning combination is guaranteed for the player on every single spins, as well as guaranteed multiplier bonus reels and nudge wilds are triggered for every spin. Coming in first will give the player automatic entry to the Jackpot Podium game.
The Jackpot Podium game consists of a five-tiered pyramid, with a light that moves between the spaces before landing on one. If the space reveals a bet multiplier, the player will receive a prize between x7 and x1000, ending the feature. If the pace reveals an arrow, the light moves to the next tier, where prizes slowly get bigger. On the second to last tier, the player is given the options to collect their winnings or gamble to win the top prize of 1,000 times the stake.

Play’N’Go has produced another incredible slot, where a simplistic design offers complex features for the player to enjoy. With the weird mix of symbols, and the fascinating features, playing into the incredible theme, the player can sit back and enjoy racing round the tracks, the cool breeze in their hair as they bet small or big to win.

The recorded maximum potential for the player is 5,000 times the stake, decent wins can be made of up to £50,000 but this will all depend on the casino that the player chooses to play with. However, this maximum may not always be reachable, with just less than 1 in a million chance of hitting it. Overall, this slot is a decent play, a high-quality slot for car enthusiasts and slot lovers alike.