Some people might be tempted to write this slot off as just another fruit slot. Red Tiger Gaming have taken on the challenging of turning this once loved pub-based slot into a virtual masterpiece. Playing on the fruit slot theme, this Reel King Mega game is a quirky take on the classic slot, making it appealing to both old and new players.

With 5 reels, and 3 lines, this slot has a total of 20 paylines, making the possibility of winning great for the player. As frequent wins can be low, they add up quickly, and with larger pay outs interspersed, it makes the game exciting and the player triumph! 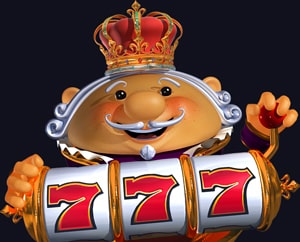 Anyone from a casual player up to a hardcore has the potential to win big with this slot starting at 0.20 cents up to 200€! This slot is every piece the spectacle it once was, when played in pubs. Now mobile, the slot still has the infamous look of the original.

The reels are covered in brightly coloured symbols. The lower value symbols include the cherries and blueberries, while 10s and Js are more valuable. The Q, K and bags of gold are the most rewarding for the player, giving 25 times the original stake for 5 on a line. The Wild is symbolised by a Jester’s hat, embossed with the word ‘wild’ across the front. It can count as any symbol on the reel, and wit the King’s Crown feature, more can appear even after the reels have stopped spinning.

While symbols land on the reels in their usual sizes, occasionally ‘Super Symbols’ are brought into play, which are 2x2 versions of the normal symbols. These can help the player win even more! The best thing being, Wilds can be Super Symbols too! With the original style of the symbols retained in this slot, it gives the player a sense of reminiscence of games once played.

There are three bonus features within this slot. These are the King’s Crown, the Reel King feature and the Gamble Wheel. The King’s Crown is frequently triggered and sees the crown from the logo bounce around the reels, turning some of the symbols into wilds. Mostly, the player will receive 1 or 2 wilds, however there is the potential to get many more.

The Reel King feature is a bonus game, triggered by all reels becoming highlighted in yellow, rather than the traditional 3 scatter way. Once it has begun, 5 cartoon Kings appear on the reels, giving 2, 5, 10 or 25 times the player’s stake for 3 of a kind. This feature is ended once a losing spin happens. The potential to win big is huge!

The final bonus feature is the Gamble Wheel. Within this feature, there is the chance to gamble the money that the player has won to win bigger with a money ladder to climb, spinning a wheel to advance. Although risky, there is the possibility of a huge payoff at the end!

Although some might believe this is a bog-standard fruit slot, there is more to it than meets the eye. With bonus features galore, this is the perfect slot for anyone who wants a trip down memory lane as they play to win.