Rhino Rampage is the latest slot from the developers at Blueprint Gaming. For some reason rhinos are given a bad reputation in the world of iGaming. In fact, you could be forgiven for thinking that the grasslands in Africa are teaming with animals that are out to get you! The portrayal of rhinos in slots is one of prehistoric beasts running around tearing things up, or rampaging which is exactly what they do in this slot.

When it comes to the game mechanics that have been used in Rhino Rampage the slot itself is slightly underwhelming and you will understand what I mean once the game loads as there is a feeling of repetition and that you could have seen everything before. The slot plays out on a 5-reel, 3-row grid with the background bathed in blazing yellow and red tones to create an impressive landscape. The soundtrack can be heard in the background and is pleasant if a little tongue in cheek as the Circle of Life accompanies you on your adventure. 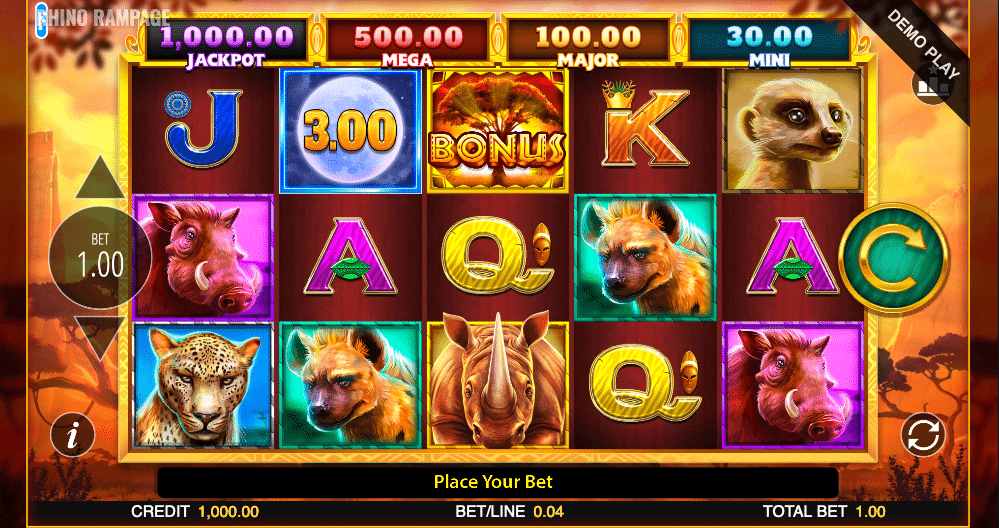 Before you start to play you need to set your bet, and this can be done by clicking the arrows that you find on the menu bar, you can bet from 0.25p up to a maximum of £125 per spin for the rampaging to start. This is a straightforward slot that offers classic styling, a laidback atmosphere, and some remarkably simple rules. When it comes to the math model this is hardly relaxed as it runs at a medium to high setting and is accompanied by a high return to player which stands at 96.28%. Generally, the mechanics will satisfy a wide range of players.

When it comes to the symbols you will probably expect to see a group of animals on the pay table after all this is what the theme suggests , and you will be pleased to know that you will not be disappointed. The low paying symbols are the cards Jack through Ace and these are beautifully decorated with tribal flourishes. You can expect to come across warthogs, hyena's, leopards, and meerkats which make up the higher paying symbols. Landing a win is as easy as matching three or more symbols on a line starting from the first reel on the left on any of the 25 pay lines.

The symbols are also enhanced by the rhino wild which can substitute for any of the regular symbols to create winning combinations, it can also appear stacked and cover a full reel. When it comes to symbol wins the premium symbols will pay you from 6x to 16x your stake however, it is the rhino that you will want to appear as not only is this the wild, but landing five on a pay line is worth 40x your stake.

To ensure that the base game does not get boring there are several features that can be activated at random, purely to provide players with a better gaming experience. One of these features is the lightning spins feature and this can be activated in two ways. The first way to activate it is in the base game when you land six or more moon symbols on your screen, and the second way is by landing a colossal moon symbol whilst playing in the free spins feature.

Regardless of the way the feature is triggered, you will get 3 lightning spins where your reels will only contain moon symbols. If a moon symbol is then landed the number of spins is reset, back to three. Landing the moon symbols will reward you with either a cash prize or one of the three fixed jackpots, which are the mini, major, or mega jackpots and are worth 30x, in 100x, and 500x, respectively.

The aim is to collect as many moon symbols as you can as this will certainly add value to your winnings. This feature continues until either the lightning spins have run out and in this case the total amount showing on the reels will be paid out or even better if your screen fills with moon symbols you then progress and see what the progressive jackpot can offer.

There is also a free spin round in right Rhino Rampage, and this is activated by landing three scatter symbols on either your 1st, 3rd, or 5th reel at the same time. You will be awarded with five free spins and in this feature the three central reels will merge and create a huge 3x3 symbol to help you land bigger wins. Better still though is landing a huge scatter symbol will also reward you with another three free spins added to your total.

It would be fair to say that there is an abundance of rhino slots already on the market, so what is it that makes Rhino Rampage different? Although there are not that many new elements the game is made stronger by the colossal symbols, moon symbols and jackpots. Rhino Rampage has a strong resemblance to Wolf Gold from Pragmatic Play and if you are a fan of this Wolf filled slot the chances are you will enjoy Rhino Rampage immensely. Both slots even look similar although there are different animals that will fill your reels.

Rhino Rampage is a standalone slot and a very dependable themed game. The features work well and present many ways to collect wins. Obviously, the jackpot is the one you want to land however it is possible to win up to 1000x your stake by landing a full screen of symbols provided it is the wild that stacks it. The maximum win is capped at 25,000 times your stake which is immense. Whilst I did not land the jackpots, I certainly picked up some good wins along the way and really enjoyed the slot and the gaming experience it provided.

My takeaway points from Rhino Rampage would have to be the generous return to player rating and this is one of the first slots to have a jackpot attached to it. OK, this is not mega amounts, but it is still a jackpot. Rhino Rampage is a solid game that offers straight forward play, the visuals are well executed, the math model would definitely score an A+, and this is a slot that I have no hesitation in recommending.