With Christmas approaching, NetEnt brings us Santa vs Rudolph, a fight between the pair because Rudolph has hidden Santa’s hat just before they fly around the world for Christmas! With an abundance of interesting features, this slot circulates around this creative Yule-tide theme!

The reel grid features 5 reels and 3 rows, which offer the player 20 fixed pay lines. This gives way to opportunities of winning up to $100,000 from a single spin! With wilds, bonus features and respins, this slot offers the player plenty in terms of gameplay. 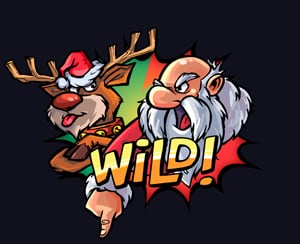 The betting range for this slot is from 20 cents to $100, giving players ample room for changing their wager. With the potential of winning up to 1,000 times the stake, it doesn’t matter what level the player plays at, with all wagers lucrative! With $100,000 available on a single spin, then there is ample chance of winning huge pay outs as you spin! Another detail of this slot is the above-average RTP of 96.30%, giving the player plenty of opportunities to win amply of wins as they play!

The design of the slot is Christmas, obviously, with stunning lower and higher paying symbols for the player to spin with. The lower paying symbols are shown as the 10, J, Q, K and A. These are each designed in the theme of candy canes, adding Christmas flare to the reels. Higher paying symbols include the wish-lists, snow globes with reindeer inside, Rudolph’s collar, a plethora of presents and, of course, Santa’s red sleigh! Santa’s infamous sleigh will give you a huge 25 times your stake when you match five on a pay line! Alongside these magical Christmas icons, there is also two wilds, one represented by Santa, the other by Rudolph. These work opposite to one another, with Rudolph appear on reel 1 and Santa on reel 5. These then work their way towards the other side of the grid, Rudolph stepping right and Santa to the left, one reel per re-spin. 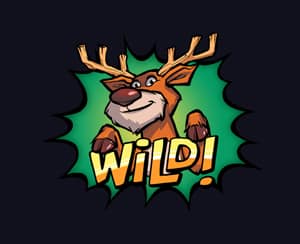 There are two main features for this slot: The Free Spins Feature and the Meter Feature. The Free Spins feature is triggered if the Rudolph and Santa Wilds appear on the same row during the course of the base level game. Starting with 10 free spins, the player can extend the feature the same way that they trigger it with Santa and Rudolph. This unorthodox activation method is a hit in our eyes and with wilds more abundant in the bonus rounds, the potential for wins is huge! Each additional two wilds that collide add four extra spins to the total, up to a maximum of 30.

At the top of the grid is the two meters, red for Santa and green for Rudolph. These fill up each time a wild reaches the other side of the reel, adding one to the meter. If all 8 are filled before the feature ends the player is awarded with one of two features: Santa’s Gifts or Rudolph Spins! Santa’s Gifts gives the player a bonus pick where a cash prize, multiplier up to 4x or Santa’s hat, ending the round, can be won. Rudolph’s gives the player three spins with 5 Rudolph Wilds on the reels. From these features, Rudolph is our winner!

Whether you’re hoping for a Christmas bonus or just a little something to get you in the holiday spirit, this slot has something for everyone, with walking wilds, re-spins, free spins, prizes and more! The top prize of $100,000 could certainly brighten anyone’s Christmas this year, so play to make it you!