StartUp Valley is the latest 2020 release from TrueLab Games casinos, and they have come up with a totally unique slot that takes its inspiration from the Californian investment culture and seen on Silicon Valley the television show. The slot is complete with a set of cute undersea creatures who are shown in a corporate boardroom and our discussing how they are going to launch a start-up company and eventually achieve the much-lauded initial public offering (IPO) on the stock market.

There are numerous video slots that have taken their inspiration from superheroes and many more that have made the ancient gods there main characters but never have geeks been the main focus of any slot, well until now!

StartUp Valley the slot changes everything as the developers have taken the bull by the horns and the geeks become the heroes. This theme should certainly appeal to a wide audience, but do the developers provide quality entertainment? Read on to find out. 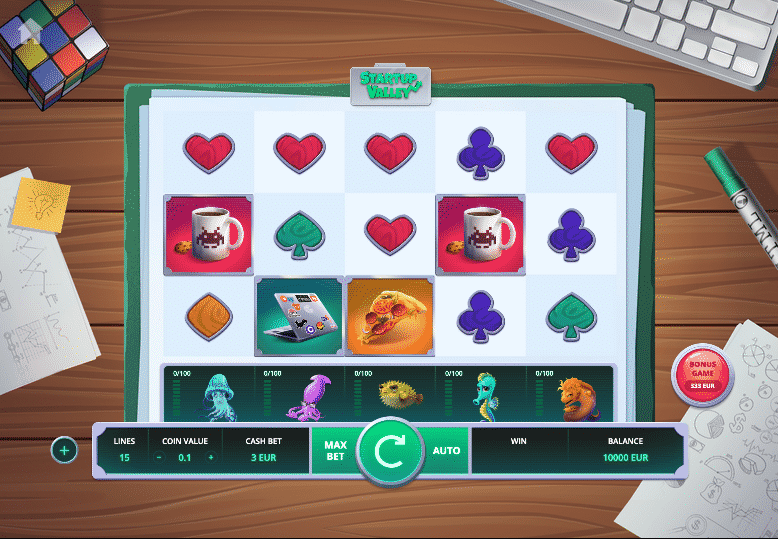 The reels have been set on a work desk from a technical StartUp company and there are pens, graphs and a Rubik’s cube littered around. The story the slot has been inspired is of five super smart individuals that have started a small company and are at the point where they are looking for an investor to help them take the company to the next level.

The five main characters are present through the entire game with each of them having their own reel designated to them. These five heroes are not depicted in their human form and the developers choose some rather strange looking sea creatures to play the part of the five geeks. The reason the people are represented in this way is because the big investor is a Shark. The slot may appeal to more people if there were human characters as opposed to the cartoon styled sea creatures.

Even though the usual five reels and three rows is a standard set up, it differs with this game. You will see that below the five reels stands one of the main characters and everyone has their own gauge to show their experience next to them. Apart from this the slot offer 15 fixed pay lines which means they are always all active and cannot be changed. There are four low paying symbols and five high paying and there is a maximum win possible that is equal to 5,000x the bet. The slot is said to have a medium volatility and the return to player stands at 96.48% which is higher than average.

When it comes to placing your bet the coin values range from £0.01 per spin to a maximum of £14.00 and with the maximum bet standing at £420 this slot will appeal to a wide audience including the high rollers out there. There is also the option where players can use the auto play function, and this includes being able to pre-set losses as well as single win limits and the rewards are a massive 1,000x the top multiplier for every spin.

The slot takes the game to a new level with the special features that it has to offer the first of which is the Solo Free Spins. Cast your mind back to the character experience gauge that we spoke about earlier, well this comes into play when the experience symbol turns up and this rewards the character with 10 xp points. Once you reach 100 xp points you are rewarded with three free spins and the lucky chosen character is complemented with some interesting boosts.

The character Richard is provided with some additional wilds on every spin, and he will throw from 3 to 5 on the reels at any one time. Gilfoyle places mystery boxes on the reels which all contain an identical symbol. Dinesh provides coin wilds that range from 10 – 100 coins for every wild that is shown on the screen. Dunn is the one that has taken charge of the Wild Multiplier and he will add 4x to any winning line which has a wild symbol showing, and finally Erlich improves the chances of winning by throwing between 3 – 9 wild symbols randomly onto your reels.

If you get lucky and land three of the Shark scatter symbols, all five characters will be show sitting around a large table for a big meeting as the company is presented with its shares on the market.

You are then awarded 10 free spins where each of the five characters show their abilities regardless of the experience level that you have reached during the base game.

There is no doubt that StartUp Valley is an innovative title and the developers at TrueLab have certainly gone out on a limb with regards to the theme but personally I think it is fabulous and I am surprised that no other developer has come up with something similar before. Admittedly you may be a little put off by the eclectic mix of characters, however, once you have played a few spins the chances are that you will find the slot most enjoyable.

Personally, I do think that the slot would appeal to a lot more payers had the characters be human, after all it would be so easy to create 5 nerds/ computer geeks complete with their cardigans and shopping bags!! This however could just be my own preference thinking humans would work better than the sea creatures it really depends on what you are looking for.
From a player’s perspective this slot provides an entertaining and solid game particularly due to the high chance of landing the free spins easily and quickly. I really enjoyed this slot and have no hesitation in recommending it, it may not be to everyone’s taste but it certainly rates high on my top ten table of slots.