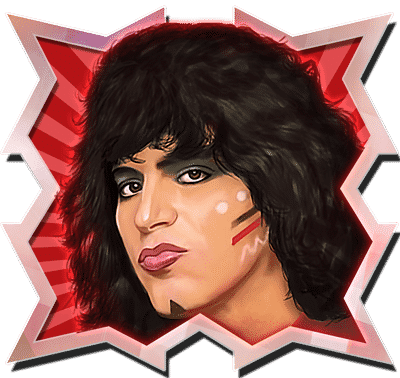 Who wrote the book on defying authority? Think hair rockers, think 80s heavy metal, think Twisted Sister. If you need to blow off steam, then plug into this brand-new slot by Play’N’Go.. Rage against the machine as you delve into Twisted Sister, the band explodes onto screen in a mess of colour in a slot that packs a punch with its attitude.
As a fan of the band myself, I have been dying to try out this striking slot since the day that Play’N’Go announced it was to be released. Lucky for us, the slot is played in a grid format, a structure that Play’N’Go has dominated in recent years and is perfect for the theme of this slot.

This grid is set up as 6 rows and 6 reels, with 36 band-themed symbols tumbling and cascading onto the reels for the player to enjoy. Wins on the reels are had by landing cluster wins.
First impressions? While the visuals could be a bit more in your face, the towering speakers and band’s music hollering in the background, the slot brings to life the bands past and everything they embody.

The betting range for this slot is 10p to a maximum of £100, which gives the player plenty of room to move and change their bet as they see fit. High rolling players can bet bigger, while beginners have the chance to win smaller amounts with their smaller bets.

Dissecting the model of gameplay for this slot, we can see it may not be as hardcore as you might hope from a rocker band like Twisted Sister. The volatility speaks for this laidback nature, set at a medium level, approximately 6 out of 10. While it is not terrible, it’s not the high volatility we would expect from such a heavy metal group.
The RTP however, is a little better, being slightly above average, sitting at 96.2%. While it is not the highest we have ever seen, it is better than the current ones, above average for the current slots on the market. 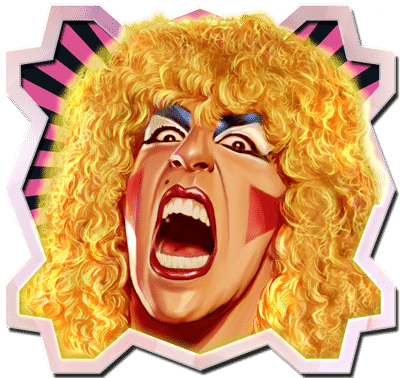 Even if you have no memory of this band, you will likely known one of their super hits that ranked 47th in the greatest 80s songs by VH1, ‘We’re Not Gunna Take it’. While they had a long career that spanned nearly four decades and six albums, it is their third album, named ‘Stay Hungry’ that stands out to me as their most impressive album. It was released in 1984 and lays the basis of the slot’s interesting design and theme.

The slot has lower paying symbols including badges and guitar picks, with five premium symbols that show the five original band members, all shown in their rich glory. When you think of the most valuable thing to Twisted Sister, you think of their lead singer Dee Snider, and this is the same for the game: he will pay out 250 times the stake for a cluster of 25 or more on the reels.
There is also a pink wild which will substitute for all pay symbols to help increase the number of wins that they player could create.

All winning band members fill the Guitar Charge meter, situated at the side of the reels, by one, up to a total of 15 charges. Band features are unleashed on the player one by one if five or more charges are collected in the meter after wins are calculated, and there are no more cascades.

One band member is chosen at random with the corresponding symbols that benefit from the effects of the modifiers. These can also apply to the lower paying symbols. There are three modifiers are: the scream, which destroys all the non-band symbols around the randomly selected symbol type, the go-wild, which turns the chosen symbols into wilds, and the unite, which transforms symbols into the same selected symbol.
The cascade feature means clusters are removed from the reels and are replaced by new symbols. The cascades continue to come until there are no longer any other wins to be had.

Above the Guitar Meter, there is also the Angry Dad Meter, which comes from angry dad in the music video of ‘We’re Not Gonna Take It?’. The meter had only four section and they fill one by one whenever an Angry Dad wild scatter is used to create a winning combination. When it fills, the We’re Not Gonne Take It feature is triggered. Any additional Angry Dad scatters overcharge the meter and continue to bump up the win multiplier by +1. The grid will clear and a new round with a 2x2 Mega Band icon attempting to throw away the Angry Dads. The round continues until all Angry Dads are gone and there are no more winning combinations to be had.

Thinking about the songs sung by Twisted Sister, ‘I Wanna Rock’, sung by Dee, the front man, makes the players question how much this slot rocks. Truth be told it rocks, but it does not rock to the extent we would want it to rock. If you appreciate the band and the era they conjure, then it is hard not to crack a smile at the way that Play’N’Go have achieved the band in slot form.
One of the most recognisable bands to hit the gambling world is Twisted Sister and that alone pulls in the players to play. Gameplay wise, it does seem like a less volatile version of the Black Mamba, whilst also sitting at the opposite end of the spectrum in their genre of Reactoonz.

While it may seem not necessary to say, this slot caters for a very specific target audience, however, should be tried by all to truly experience the slot. With a total of 4,500 times the stake up for grabs, the maximum win of £450,000 is enough to entice anyone in.

Overall though, this slot is another exciting release from Play’N’Go, with the grid gameplay and plenty more the player to enjoy. Anyone who likes the band will of course enjoy this slot, me included!