Vampire Senpai is the latest slot from the developers at Quickspin and this latest release has been created using several ideas and although I have heard of Vampires, I had no clue what the reference Senpai means. After searching far and wide I discovered that there are two meanings, the first is a traditional teacher, however it can also mean a person you are pursuing and trying to gain their attention whether this is platonic or romantic. Therefore, I had to make my own decision and I have chosen to go with the teacher aspect however, there is room for you to make your own if you want to.

Quickspin provided the information which cleared these things up and this is that Vampire Senpai has taken its inspiration from ‘Jiangshi’, which are undead creatures that you would find in Chinese folklore who absorb the life out of people. The Chinese place a great deal of emphasis on the afterlife. However, there is no need to fret as Vampire Senpai has been created in a cartoon style which is great if you are squeamish. The overall result is that you have a cheerful slot that will provide you with some lightheaded moments to provide a softer edge to the dark theme. 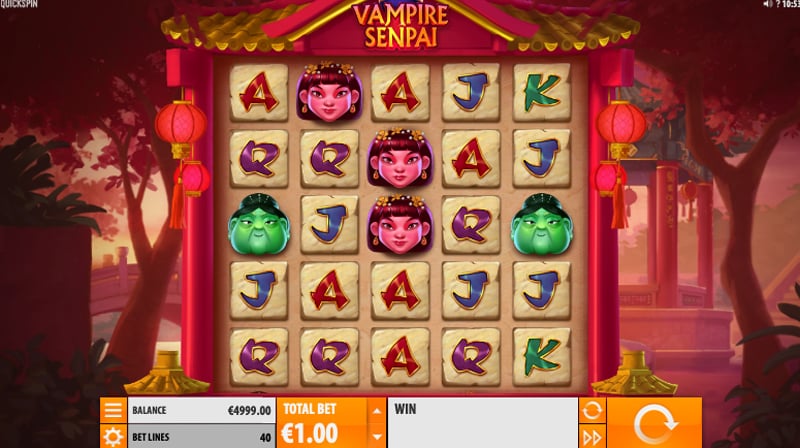 This is all good news for the player as there is a cast of friendly faces waiting for them, and some neat animations that fill the 5 reels and 5 rows grid. The game is set within the sloping roofed, golden tiled, red-painted temple, with lanterns hanging around that sway ever so slightly in the breeze.

The pagoda is situated in a supernatural-inspired Chinese garden, with the background showing the sun almost setting, but not quite, hovering at the horizon, the world in a dusk limbo. This is the time when the vampires may come out, allowed the freedom to now roam the surface of the earth.

The soundtrack in the background is a soothing Asian-inspired tune, which remains relaxed, regardless of whether you are playing in the base or the bonus game. It is very Zen and soothing.

Choosing the stake is easy, with up and down arrows to guide you until you have found the stake you want. This range is from 10p to £100 per spin, and once the player has decided where they settle, it is game on!
A little bit more mathematics for you before the vampires swarm the slot. Quickspin have opted to choose a medium to high volatility, with a rating of 3.5 out of 5. Not the most volatile slot you could choose, but it does give the element of risk without seeing you lose everything!

The RTP is 96.19% and when put alongside a larger than normal potential, there is very little that anyone can complain about!
Landing three or more matching symbols across one or more of the 40 pay lines will see the player receive a pay-out. Vampire Senpai has not a huge range of regular symbols, only seven, thought they are padded out by the number of wilds present, each with varying abilities.

Lower paying symbols include the A, K, Q, and J royals, which are shown as simple brushstrokes, which is common to almost all Asian themed slots. The ‘mediums’, as Quickspin calls them, as three human-like characters which we can assume are destined to be vampires. They are worth the same – from 1x to 10x the stake. There is a green matron, a red female, and a purple gentleman. The higher paying symbols are special, the three wilds, and are worth 1x to 20 times the stake in the base game – these increases to 40 times the stake when a winning combination is found in the free spins.

Quickspin has made Vampire Senpai’s features all about the wilds and the transformative powers they hold.
When a Vampire Wild lands on the reels, it will bite any human adjacent to the symbol, transforming them into Turned Wild symbols. This can kick start a chain reaction as these freshly made Turned Wilds can then transform any adjacent human symbols into Turned Wilds; this process of transformation from human to vampire continues as long as there are surrounding human icons to be turned!

The golden bell which acts as the scatter will unlock the Reanimated Free Spins. Landing 3, 4 or 5 scatters will reward the player respectively with 7, 9 or 12 free spins. The Vampire Wilds act as they do described above, and they have the additional benefit for the player of staying in position for the entirety of the free spin feature. On each of the free spins, the Vampire Wilds will move into another position to improve their chances of their transformative powers.
Additionally, on any of the free spins, it is possible for the Talisman Wild symbol to appear on the first, second, third or fourth reels. The Talisman Wilds can substitute for any regular symbol but are also sticky, so they will stay in the same position until all the free spins have been used up.

Every Vampire Wild or Talisman Wild that lands during the free spins feature will add an additional free spin onto the end of the spins!

The potential here is quite impressive, but there is a lack of enthusiasm from the slot itself. This is probably because of the theme if we are quite honest. Happy chappy slots often bring a lot more enthusiasm for wins, while darker slots tend to have more of a sultry feel to them – we feel this is where this slot lies.
The vampire theme, though overused in the modern era, is perfect for this slot, and Quickspin have used the vampire cliché in just the right amount, without it being too much. Even if you aren’t into vampires, the features from this slot will make you want to.