Just because you are a fan of Vikings doesn’t mean you will necessarily enjoy Viking Voyage. For those into the TV series Vikings or into the history of the nomadic people from Scandinavia, then Viking Voyage is unlikely to interest you. That’s because the Vikings presented in Viking Voyage are a more kid friendly cartoon version of the Nordic invaders who raided and pillaged from 1000 years ago. The animation itself is great.

The background with ships and Viking “invaders on moving waters” is very well done. The spinning of the reels does not move smoothly, however. But the goofy Viking pics bring a fun energy to the game as players play for big prizes in Viking Voyage, an online slot game from BetSoft. 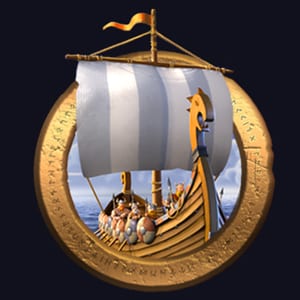 Goofy Vikings are the theme of Viking Voyages. Once again, I emphasize these aren’t historical Vikings, but fun, goofy cartoon Vikings. The music of the game mixes epic adventure with traditional slot machines sounds when players win. Players start with a balance of 1000 credits. Bids run from 0.10 to 100. Players do not receive a lot of flexibility in betting.

Players only choose the coin they bet on. They cannot multiply the bet and cannot choose the number of paylines from the game’s 10 paylines that run left to right. Few bonus levels exist on Viking Voyage, with players only able to play the free spin mode. But there are numerous ways to access free spins, a part of the game we will look at in the symbols section.

Viking Voyage features 14 symbols. There are five standard symbols. 10 and J feature the lowest payouts in the game. Q has the same payouts as 10 and J except it goes up at the 4x level.  K and A are the highest of the standard symbols, with A featuring a higher payout at the 4x level. There are three mid value symbols. The Ax is by far the lowest of the mid value symbols. Much higher payouts come from the Viking helmet and the Holy Grail like cup. And there are high value symbols. The Village elder and the brown bearded warrior come with the same payouts. The highest of the high value symbols it the red bearded warrior. The Raven is the scatter symbol.

That stack will hold and another free spin is rewarded. The first and fifth reels also feature a bonus coin from time to time. On the right hand side at the bottom of the screen, there is a buy feature number. That number is the amount players can pay to play free spins without waiting for the game to award it. The buy feature is based directly on your bet. The larger the size of your bet, the larger it costs to pay for free spins. But when players earn a bonus coin, the cost drops. If players earn enough coins, they can “buy” the free spin level for free.

All the free spin options make Viking Voyage interesting. The animation is fun and players can win big if they play those free spins right. Throw in an autospin option and double up coin flip, and maybe there’s just enough for players to be interested in Viking Voyage. But remember, this is not historical Vikings. So historians need to stay away.