World Cup Football is the latest from the developers at the Curacao-licensed studio AGames and could be described as one of the only football themed slots that is built for true football and slot playing fans. So, if you are a player who has been striving to find a way to combine the passion you have for slots and your favourite sporting passion AGames could have created this slot just for you.

The slot is plays out over 7-reels, 5-rows and offers 100 pay lines, making it a hard hitting no nonsense game. The game is complete with a unique format of play that creates and simulates real football matches whilst still providing many original ways to win with re-spins and bonus pay outs. Players could easily think that they were taking part in a PC game when playing the World cup Football slot, don’t be fooled though as looks really can be deceiving and this is definitely a slot through and through and a reasonably rewarding one too. 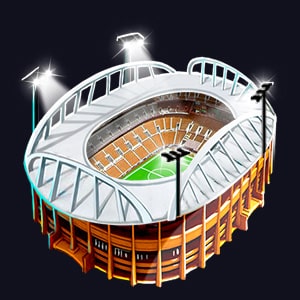 Most players have probably come across many slots that have a football theme, but not that many could be described as original as an actual football game. The whole of the game screen is designed so that it represents a football pitch complete with tickets, jerseys, cups and other paraphernalia and these are all standing on the grass in the same way players do.

Once the game is underway the rounds are accompanied by the cheering crowds, commentators talking and chanting which all help to authenticate the theme. These sounds coupled with the unique game play and overall design really will make players feel as though they are sat in the stadium watching a football match rather than playing an actual slot.

The first thing players have to do in World Cup Football is to choose the two teams that are going to compete against each other. There are thirty two different teams for players to choose from or if they would rather the slot can make the choice for the them. The match ends when the player has spun their reels ninety times and players are able to win one of the three jackpots which comprise of 5% of each bet and dependant on the results of the match that they have just played.

When it comes to the bet range players will have to meet the minimum fixed bet of 20 coins per spin. With a coin value of 0.01 credits, this makes up the fixed bet. The highest bet range is 1 credit players will be using 20 credits every time they spin their reels.

Players can bank their prizes when they land between four and seven of the same symbols on a single pay line working from left to right. The highest paying symbols are the pictures symbols such as the stadium, cup, kit, hat, referee cards and when these are landed players are rewarded with anything from x10 their line bet for landing four referee cards to x500 for seven gold cups.

If the player is lucky and lands an entire screen of gold cups, they can land a jackpot of x50,000 the pay line bet. As well as the high paying symbols players can land smaller wins from the lower paying symbols which are the usual playing cards 10 through to Ace and these can provide players with wins from x2 – x50 of their line bet. 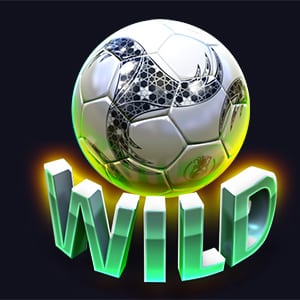 World Cup Football only has one special symbol, and this is the wild which is represented by the football. The wild can substitute for all other symbols to create winning combinations. There is a difference, and this is that the wild is permanently fixed in the centre of the pitch and it remains in place during every round. If the soccer player makes an appearance during a spin, the wild is automatically activate the “attack re-spins” game.

This feature plays out the same way as a football match, where one player tries to score a goal against one of the other team’s player. Players start on the first reel and move towards the ball (wild) in the centre to pick up the ball and head towards the opponent’s goal.

The opposing players will make an appearance on the 7th reel and they then move towards the player to try and stop them from scoring a goal. Also, whilst this is all going on the other symbols appear in the other positions to give regular prizes.