1st of The Irish

Introducing 1st of The Irish

With the luck of the Irish on your side, let us see if you can win big with this stunning slot. With a reasonably unusual reel set of five rows and six reels, there is plenty of space for the player to create plenty of winning combinations. Designed and produced by Red Rake, this slot is incredibly well designed and is one of the few slots that gives the player cluster wins with spinning reels.
These cluster wins are imperative for the player to win well, with small pay outs from the five matching symbols in a cluster. The biggest win can come from all positions on the grid, thirty different ones, being filled with the same symbol.

With features such as auto play, which allows players to spin from five to one hundred spins without stopping, lets the player sit back and relax, taking in the Irish atmosphere. 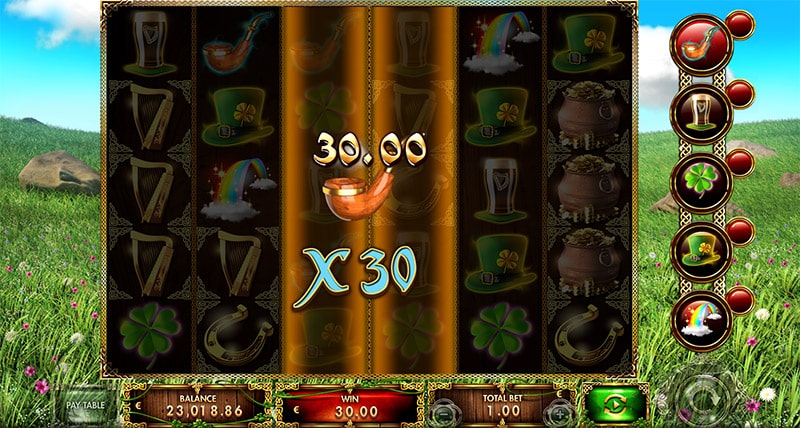 The reels produce bets of 8p to £20 which is reasonably small considering other betting ranges of similar slots that see bets upwards of £200. This is small, giving the player truly little manoeuvrability with their betting.
The return to player, or RTP, of this slot is 95.4% which is a lot less than we would hope to see. Usually slots of today sit around the 96% mark, which means we are a little disappointed, but the features and fun nature of the slot make up a little for the lack of return that you get. The reels do feel quite clustered in comparison to some slots, and while those who play on mobile devices may not experience the same feel, but no wins will be missed. 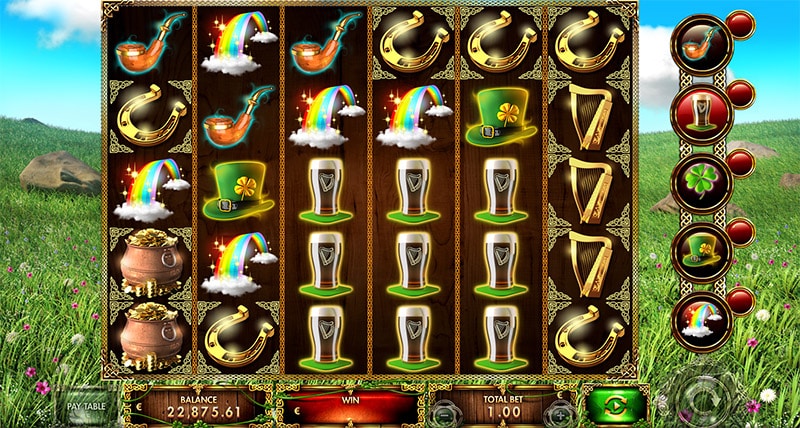 Irish Symbols to play with

The most lucrative symbols for the 1st of the Irish slot are those that are shown in the golden frames. These include the harps, the horseshoes and the pots of gold that litter the reels. When landing these symbols fully across the reels in all 30 slots they offer wins of 112 times the stake (for the harp), 125 times the stake (for the horseshoe) and 500 times the stake for the jackpot symbol (the pot of gold).Each of the symbols is stunningly designed, with a grass background, all brightly coloured and designed to allow the player a fun, drama-free slot to entice them to enjoy.

There is also a wild symbol that is represented by the leprechaun, which we expected to see somewhere in this Irish themed slot. This can substitute for all other symbols on the reels.
The graphics for this slot are simple, with the same symbols repeated plenty of times on the reels. The same symbols pop up across all Irish-themed slots, with the classic top hats, pots of golds and clovers. There are no surprises in this slot theme-wise but there is much to be admired with the dynamics of the gameplay.

Features for the player

There is five meters representing the lower paying symbols which signify the progress of the corresponding reel-modifiers. Each of the symbols have a reaction on the reel-set with a total of nine spaces to be filled.
Every time there is a win involving one of the symbols related to a meter, the meter will increase by one. The 1st of the Irish is triggered by a reel modifier when the red dot of the meter is lit.

The smoking pipe symbol helps the player by adding multipliers to the reels where the pipes had originally been. The number of matching symbols will determine the amount of multiplier the player gets.
The pint of lager appears on the reels as a 3x3 block that finds similar symbols and creates matches for the player to win even bigger.

The shamrock aids the player by adding four sticky wilds to the reels, and each of theses wilds will last three wins on the reels.
The hat symbol creates a full reel of wilds for the player, and when the hat is removed from the reels, the wilds will react in the same way that a cascade does.Finally, the last symbol with special properties is the rainbow token, which launches the player into 12 free spins which comes additionally with features of its own.

Concluding 1st of the Irish

This slot, while it may only seem simple, had a lot going on, with cascading wins and intricate cluster strategies, there is plenty for the player to win. With reel-modifiers improving the chances of even bigger wins, there is something for everyone in this incredible slot.

The total of 500 times the stake up for grabs gives the player a reasonably chance of winning money. This is not the biggest paying slot, but for beginners, this slot will give them a good chance of winning some reward.