Majestic Megaways is the second in the series of Megaways slots from the game developers at iSoftBet with the first being Aztec Gold Megaways. Aztec Gold Megaways proved to be a big success with players although it wad a cautious first attempt at the Megaways game mechanics for the developers and this could be because they were unsure how to direct all the power they were able to create. Regardless of this they have certainly grabbed the bull by the horns so to speak in this slot. Majestic Megaways will take you across the Atlantic to South Africa and it is fair to say that this is a slot that is beautifully created with glorious sunsets and an abundance of animals. The burning question must be is this worth a spin? Keep reading to find out. 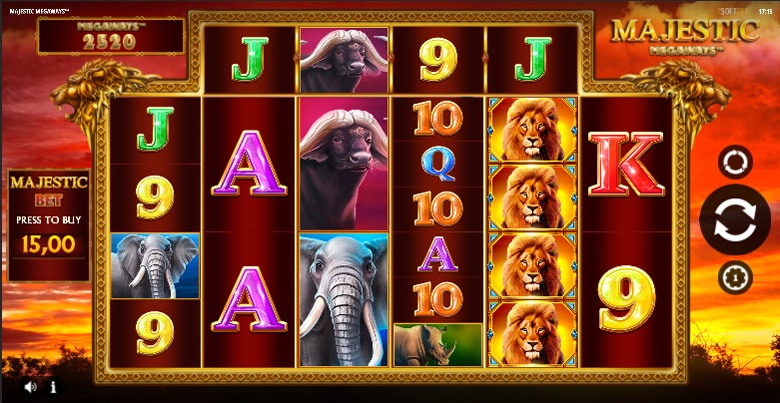 On opening the game, you will understand why the game is described as Majestic from the gold and deep red skies, nature and wild animals. The developers have captured the African spirit perfectly although some players may feel as though they are coming home as this does resemble many of the other slots that have this theme. The Megaways mechanic comes courtesy of Big Time Gaming from Australia.

The slot plays out over 6-reels that contain 2 – 7 symbols plus the tracker reel that can be found above. If you manage to set the grid to its complete capability and your will benefit from 117,649 ways to win, and you can keep your eye on how many Megaways are available from your meter next to your reels.

Before you can begin to play you need to select your stake which start from 20p per spin up to the maximum of £20 per spin. The math falls within the high volatility and provides a return to player of 96.11% in regular play and this rises to 96.97% when you activate the bonus buy. The aim is for you to land winning combinations that comprise of three to six of the same symbols. It is at this point that the Megaways mechanic kicks in and the winning symbols explode from the reels and are replaced with new ones, and the cascade feature can also create multiple wins on a single spin.

The pay table is presented well although a little predictable. The lower paying symbols are made up of the playing card symbols from 9 through to Ace and these can be used anywhere in the game. The higher paying symbols include elephants, rhinoceroses, buffalos and the king of the bunch which is the lion. You only need to land two lions to form a winning combination, get lucky and land six lions and you will be rewarded with a generous 50x your stake. There is a tree which is backed a sun symbol, and this is the games wild and can substitute for all the other symbols apart from the bonus.

When it comes to the features you will either love them or hate them as they are commonly found in many slots. The mystery symbol is represented by the Full moon and this symbol can land anywhere on your game screen and morph into matching symbols from the pay table to increase the amount that you can win.

The diamond symbol represents both wealth and contradiction and it plays the part of the bonus scatter and when you land four or more it provides you with entrance to the bonus game and rewards you with an initial 12 free spins. Landing more scatters in view will award you with another 5 free spins to a maximum of 27. You will see that the scatters can appear in the bonus game too but this will only be on your extra reel horizontally, land three and the reward is 5 additional free spins, land four and you will be rewarded with ten free spins and better still the free spins are not capped. The free spin feature is made even better as it is complete with unlimited progressive multipliers which starts at 1x and for every cascade win you make it goes up by one, there are no limit on how high these multipliers can go and the multiplier does not reset between your spins.

Dependent on the provider and where in the world you are playing the developers have added a buy in feature which is the Majestic Bet in this game. If you choose to activate this you are guaranteed at least four scatters on your following spin which fast tracks you to the bonus game complete with the unlimited multiplier, however the buy in will cost you 75x your stake.

Whilst the first Megaways slot, Aztec Gold Megaways from iSoftBet made effective use of the game mechanics with unusual adventurous features. This slot however is the opposite, whilst there is nothing wrong with it, it is a slot that plays things safe with tried and tested features and theme and nothing to make it really stand out. It is hard to be overly critical as the slot does exactly what it says it will and this is done very well but there is nothing overly exciting or new on offer.

It came as little surprise to me that the Megaways was the most profitable and exciting part of this slot as it takes place within the free spins, offers unlimited multipliers and can be activated more free spins. The overall potential sits around 20,000x+ the stake which means that there are sizeable wins available. This makes the buy in feature more desirable particularly as it provides you with a higher RTP. I found the most appealing part of the slot to be the Majestic Bet and how it allowed me to skip to the bonus round.

Majestic Megaways is a well-designed and presented wildlife slot that will afford you big win potential. Personally, I would recommend giving this a spin, and now that iSoftBet have produced a solid, reliable yet slot create a solid, dependably reliable, somewhat unexciting Megaways slot, we can hope that they will get more created when it comes to the next in this series.