Mercy of the Gods

Mercy of the Gods online slot

Enjoy beautiful animation as you explore the treasures of pyramids in Ancient Egypt with Mercy of the Gods, an online slot game from Netent. Players spin slots filled with symbols from ancient Egypt as they play for free spins and jackpot bonus levels seeking big prizes in this 5 slot, 20 payline slot game. Players also have control over their bets on the game’s 20 fixed paylines. The game pays out left to right as players seek x3 to x5 on paylines to achieve big winnings. So take in the culture of Ancient Egypt as you pursue big prizes with Mercy of the Gods.

The clear theme of Mercy of the Gods is Ancient Egypt. The slot reels take place inside a pyramid. A clever and beautifully animated sequence greets players as they ride a boat into the tomb of one of Egypt’s pharaohs. Two great Anubus statues sit on either side of the reels and pictures painted on the walls of the pyramid grace the backdrop as the reels spin. One of the best pieces of animation is when you hit the game’s free spin level.

A key hits the door of a pyramid and a giant pharaoh pops up from the top of the pyramid as players enter the bonus level. Players start with 500000 credits. Players have control over two elements of their bets: the coin value and the bet level. Coin values stay low as players choose between 0.01 to 0.50. Players choose bet levels from 1 to 10. Alternate between these two to create a minimum bet of 20 to a maximum bet of 200.

There is a “max bet” button that automatically places the max bet for players. The autospin runs up to 1000 spins for players. Autospin also features multiple advanced features (such as stopping on a win), but none of those are required to set the autospin. And your autospin will automatically go into free spin and bonus games if you don’t set up any advanced settings for it. 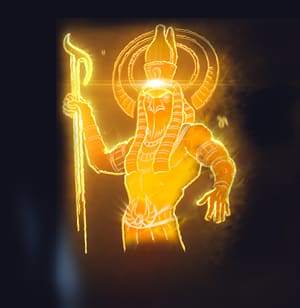 Mercy of the Gods features 8 symbols. Lower tier symbols are the traditional royal symbols of A, K, Q, and J. Four higher power symbols include Tutankhamen, scarab beetles, Horus falcons, and a female explorer. The female explorer produces the highest payouts, producing wins at 80 times your stake when you land five on a payline. Wild symbols in the game replace all symbols except the scatter and bonus symbols. If players land one or more wild symbols, they receive Gift of Life Re-Spins. Wilds expand to cover entire reels.

The wilds then drop down one reel on each spin, keeping wilds on the board for multiple spins. The eye of Horus is the scatter symbol for the game. Land three of them to unlock free spins. The more scatter symbols you land, the more free spins you get. Access the gift of wealth jackpot game with three bonus symbols. Bonus symbols land on the board with varying amounts of money. The type and number of bonus symbols players land determines which, if any, of three jackpots players win.

Review of Mercy of the Gods

Players with a respect for Ancient Egyptian culture will love Mercy of the Gods. The animation depicting the many symbols of the ancient culture is exceptionally drawn. Veteran slot players will love the controls they have over betting. And players who like variety will love the two bonus levels that switch things up as they play. So expect to find Mercy of the Gods entertaining no matter what brings you to play the game.