Nero’s Fortune is the latest slot from the Swedish developers at Quickspin and is based upon the infamous Emperor Nero and the brutality that he used to reign the Roman Empire. Emperor Nero was probably the worse ruler that Europe has ever seen, and he was so wealthy that although it was befitting of his status there was no one brave enough to take him on. For this slot Quickspin have taken some elements from Nero's reign and the time to propel this latest tumbling slot. There have not been many Roman-themed slots of late so read on to see whether Nero’s Fortune lives up to its name. 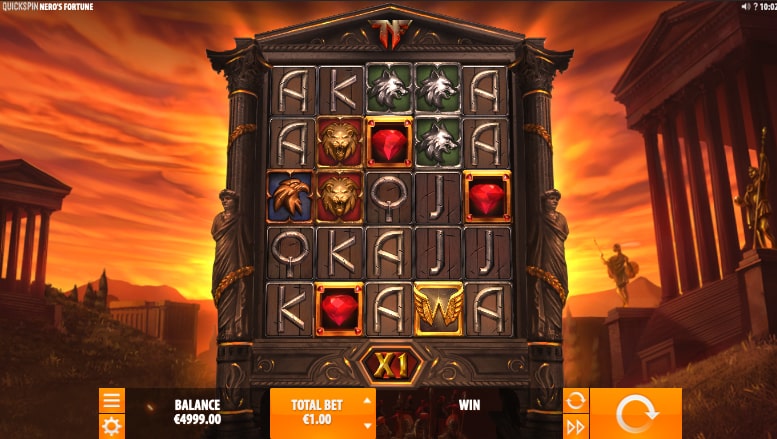 The development team have obviously taken their time to design the slot and this has been executed to the highest standards and are of the very highest quality. With the use of their new 3D engine we were expecting a bit more, but it is enough to say that the game looks superb and there is a fabulous orchestral soundtrack that enhances the slot significantly. Choosing a theme for this slot gave the developers the opportunity to create some dark colours and show the Roman empire burning with animated ash floating around whilst Nero sat there doing not a lot in the way that history shows.

This slot is the third in the series of tumble slots from Quickspin however this is completely different to the others. The first was Golden Glyph which was played over a 7x7 grid, followed by Wild Cauldron which expanded to provide a 6x7 grid. Nero’s Fortune takes this down a bit further as it uses a 5x5 grid which is complete with Roman structures. With the amount of detail, it would be right to say that Rome certainly got the graphics team flowing.
Rumour has it that the ancient romans were hardened gamblers regardless of where they stood in society, and this slot allows you to follow in their footsteps and bet from as little as 20p per spin up to a maximum of £100 per spin. Although the grid has been compacted the slot will offer you the highest return to player out of all the tumble slots at 96.21% even though the high volatility still stands at 5/5.

With this slot using the tumble feature, your symbols drop down to fill the grids and you need to land clusters of five matching symbols next to one another to create a win. When you land a win, all the winning symbols disappear from the grid and new symbols tumble down to take their places which can see you forming chains of winning symbols and this continues until you have no more winning clusters in view.

The symbols you will come across in this slot are the usual playing cards Jack through to Ace for the lower payers and lions, wolves and emblematic eagles. The highest paying symbol is the red ruby, land clusters of 12 or more and you will be rewarded with 150x your wager. The wild is represented by the “W” symbol and can substitute for all the symbols apart from the scatter to create winning combinations.

As well as the cluster pays, there are features you will come across which can appear at random in the base game or can be activated in other ways. The first is the Burning Arrows feature and this can only appear in the base game when a winning combination is removed from your grid, and there is a chance that the game could provide you with a multiplier symbol in the empty spaces. When you take your next spin, the new symbols will then cover any of the multipliers. If you then create a winning cluster when this is removed and reveals one or more of the multipliers, they are accumulated and rewarded at the end of you spins, and the multipliers is then reset ready for your next spin.

The main feature is the free spins which take on the form of Burning arrows and expands the grid making this far more effective for you. The feature is named the Flames of Nero Bonus, and in this feature you are looking for the scatter “BNS” symbol and landing 3, 4 or 5 in view will see you rewarded with 10, 12, or 14 free spins respectively. The feature begins with spectacular animation and the reels tilt to give you a true sense of grandeur. With every new free spin there will be an assortment of multiplier symbols are spread at random on your grid. When any winning clusters are removed to reveal the symbols, the appropriate multiplier is correlated, and this is then applied to your wins. The multiplier is not reset between your spins instead it continues to increase until the feature is over.

Nero's Fortune from Quickspin is a solid tumble slot and is the first of the series to offer unique game play. The first thing I noticed was the fabulous graphics and the care and attention that has been taken to create them leading to outstanding visuals. Then ambience and drama created captures the entire ethos of the game and although it may lack warmth those looking for some serious no-nonsense gaming will appreciate the slot in its entirety. Out of the three tumble slots from Quickspin this has the lowest potential for wins however 8,100x your stake is not something to grumble about.

This is a straightforward slot which is great for those wanting to get on with things and the slot is played at a good pace. Everything comes down to creating the clusters and multipliers in the free spin feature. Better still it is quite easy to build up decent multipliers when the bonus feature is activated. There is a chance for lots of multiplier symbols to be added with each new spin, so you need score clusters and let them build up. It is true that it is not that easy to land the big wins everyone is aiming for but once the bonus game is in play you can land some welcome wins.

Although personally I think that Quickspin still need to work harder with regards to the math model and tumble mechanics as currently they are not as refined as competitor slots, however this is still a great game with excellent features and win potential.