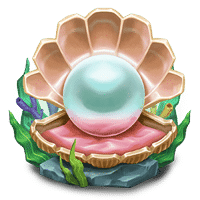 It has been a while since we have seen a under-the-sea slot, and it has been forever since Play’N’Go produced one, the final sea slot from them quite possibly being Sea Hunter, which was a reasonably simple 3x3 slot that shares some of the features that Octopus Treasure.
The namesake of the slot, the octopus, is always on your mind as you spin the reels. He sits behind the transparent reels, bobbing along with the sea, occasionally wrapping his long tentacles around the grid to meddle with the symbols for the player. The reel grid is a 5-reel affair, offering the player with 20 pay lines. Unfortunately, there is a lot of stuff on the screen to deal with. Octopus Treasures has an exceptionally crowded array of bright flora and impressive seal life, and while it is great, it could be seen as the Garbage Patch of the Great Pacific. Adding to the atmosphere of the slot, there is a mysterious soundtrack. Overall we would have to say the slot is okay, design-wise, but not the finest Play’N’Go has to offer.
Aside from the general lack of excitement, there are a few bits that detract from the slot experience. The base game feature animations can take up a bit of time and it will mean you are sat waiting when even the smallest win happens. These take even longer during free spins. So this is a frustrating when you just want to crack on. However, keep in mind that there is 5000 times the stake up for grabs like with many other Play’N’Go titles.

Octopus Treasure can be classed as a fairly straight forward slot and offers the player a decent bet range of 20p to £100. This gives a decent range for the player with their betting chances and allows all players to have the chance of winning big.
The RTP of the slot is just above average, sitting at 96.25% on the main default setting. Watch out though, some individual operators and casinos will have this lowered, so it is worth checking before you begin to spin. The volatility of the slot is medium and has the same potential that the standard Play’N’Go model. There is no official hit rate available, as Play’N’Go choose not to provide this information, however wins do seem to be reasonably often, intermingled with four modifiers to use in game

Symbols to spin with

There are eight symbols at play in Octopus Treasure and these are divided into lower and higher paying groups. The lower paying symbols consist of the four card suits: spades, diamonds, clubs, and hearts. The higher paying icons are the pots, jugs, crowns, and coins.
While these do not initially seem to tie into the theme, we made the connection of the lost treasures of the deep being the octopus’s collection. While this may not be what the designers were going for, it is what we think they meant!
The values of these are not amazing either, with a line of five of the higher paying premiums giving between 2 and 3.5 times the stake. There is slightly better odds with the wilds, which will offer you 5 times the bet for a line of 5. Speaking of wilds, this one is covered in coral and can substitute for all other symbols except for the scatter! 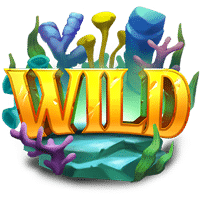 We think our suspicions of the treasure of the depths of the ocean being the main theme aside from the massive octopus as we continue into the features of the slot. There are treasure chests galore and the features in this slot all revolve around collecting keys for the chests in order to unlock them.
On any given spin, a key symbol could appear on the third reel, and when it does, the octopus behind the reels will reach around and grab the key. He will then unlock one of the chests sitting on top of the reels revealing one of 4 different modifiers. These are the wild coins, the gold pile, the treasure grab, and the wild reels.
The wild coins modifier sees plenty of coins float to the bottom of the screen where the player can select up to three. These will then reveal a symbol from the eight in play and any of these on the reels will then turn into wilds.

The next is the gold pile which sees the octopus upgrading random symbols to help the player win even more. The Treasure Grab is the third modifier and see the symbols being collected by the octopus who then pays the player out an instant prize. Finally we have the wild reels, which sees players choosing from pots which will transform an entire reel into a stacked wild; it may be possible for there to be more than one pick during this feature.

To sweeten the deal further, there is the chance of multipliers being added to any of the wins; this can be either x2, x3, x5 or x10.
The game enters the top tier when three of the pearl scatters land on the first, third and fifth reels; these will activate the Key Respins feature. During this, only key symbols will appear on the reels. These aren’t worth any money but are collected instead. The number of keys that are collected will translate to the number of free spins awarded, from 5 to 10.
During these spins, each spin will play with one of the bonus features mentioned above and whenever a key symbol lands on the reels, an additional spin will be added to the remainders. On a positive note, the free spins have no limit to the amount you can win!

This slot is pretty simple, with standard features and not a whole lot to get excited about. The most interesting thing is the pay out of 5,000 times the stake, which we do appreciate. While it isn’t the worst game in the world, we recommend that beginners take a spin on this to understand how slots work and the potential they could be playing for.
Regardless, Octopus Treasure is a decent game, just not the best Play’N’Go have ever offered.