Show Me the Mummy

Show Me the Mummy Slots

Show Me the Mummy is one of the latest releases from the developers at Booming Games which is played out over 5-reels, 3-rows and 5 fixed pay lines. As the name suggests the slot is based around an Egyptian pyramid in the Sahara Desert. There is an abundance of features that make this slot stand out from the competition for all the right reasons. The free spins are complete with an added feature that is only ever active in the free spin feature.

The first thing that players need to decide is where their bet level will be, the wagers vary between $0.01 and $50. This multiplied by the five pay lines, which gives a total bet equal to $0.05 to $250. As the bets are so high it stands to reason that the slot can pay out a lot even though the usual pay-out is x50 of the stale or x500 if the players are lucky enough to land the multipliers with the wins. Therefore, the jackpot can top out at $125,000 and players can end up getting paid out quite well, and with an RTP of 95.36%, the odds for return to player are good too.

It will not take players too long to realise that the big win multipliers are not just restricted to the wild feature, they are also in the major free spin feature that comes with the fire reels or the scatters. Although the layout is simple the features are something else. For starters there are the wilds which is the symbol that can substitute for most of the other symbols with the exception of the scatter to create winning combination. The scatters will only make an appearance in the free games and do not directly attribute to the winnings.

Free Spins on Show Me the Mummy slots 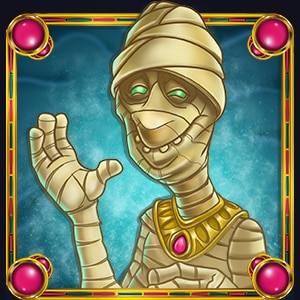 Players need to land the scatter symbols three or more times to activate the free spins. When they do, they will notice immediately that the minor symbols have been removed and filled with the wilds and major symbols which means that players have a much better chance of landing wins that pay well. Unfortunately, this feature cannot be reactivated but this doesn’t mean that this is not where a large portion of the winnings come from.

The third column in Show Me the Mummy slot is where the Mystery Wild reel sits for the whole of the free spin feature. During the game there are randomly placed mystery wild reels, up to two wild reels per spin, and the multipliers are also chosen at random and range from x2 up to x10, players just need to remember that the mystery wild reel will only play on the third reel.

With regards to the theme the slot doesn’t really excel as such particularly as the Ancient Egyptian theme has been done over and over again. This is probably why Booming Games have chosen a design that is quirky and leans towards more of a cartoon and makes the slot more interesting. The game logo is the wild multiplier with the SC logo as the scatter. The major symbols in Show Me the Mummy include the Mummy who is waving, the yummy Mummy who is posing for the camera and the archaeologist. Whereas the minor symbols include the four usual royal playing cards and the Amphora too. 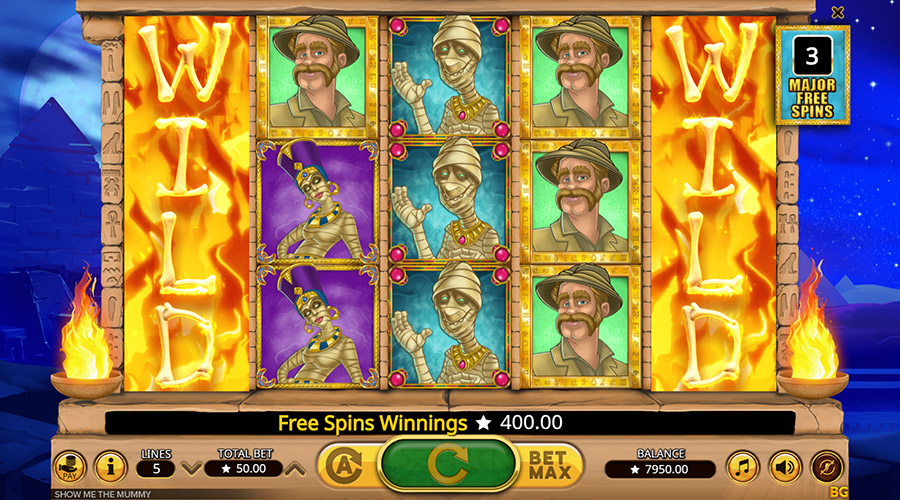 This is a good game when it comes to the design and the features, although it is fair to say that the features win hands down, although players need to remember that the wild will only make an appearance it the free spin feature. The background shows the edge of the Sahara Desert and players will see the pyramids to the left hand side of the screen along with some palm trees. To the right there is a large Sphinx created from sand.

On the sides and behind the symbols on the reels, players will see the ancient symbols that are carved into stone and complete with two blazing fires at the very bottom of the play screen. The theme itself is quite dark as it is actually surrounded by how the developers see the idea of death.

Players will certainly get the whole experience in the Sahara Desert with the stunning pyramids and they also get to experience the historical and amazing sights in Egypt, as well as some mummies that have been dug up along the way!