Sticky Joker from the game developers at Play ‘n’ Go is a Vegas-style slot that will entertain those who are fans of fruit-based slot games. The slot gives players the opportunity to win a massive 400x their stake from any one spin and the game has a re-spin feature which can lead to the activation of a wheel that is full of multipliers.

The series of Vegas inspired slots from Play ‘n’ Go are still very much alive and not only does the original first in the series Fire Joker still remain as one of the most popular slots and is also responsible for the series that is no into its sixth incarnation. To date there has been Fire Joker followed by Inferno Joker, Chronos Joker, Xmas Joker and Star Joker. The new release Sticky Joker should really come with a spoiler alert as the name really does say it all and it is the sticky jokers that are not only stars of the show but there wouldn’t be a game without them. Those who are au fait with this series of slots will be really excited about this new release whilst others may really question why the gambling world needs another slot in this series. But suffice to say it is here now so let’s take a better look at what it offers.

The slot gives off a good impression from the word go and Sticky Joker is a vibrant yet basic slot. The developers at Play ‘n’ Go have opted for a classic 3x3 reel set with a faded blue constellation in the background. The additional effects do appear to feel as though they are an afterthought particularly as you focus on the reels which house 9 large symbols, however the symbols that are used are everything any player could wish for. 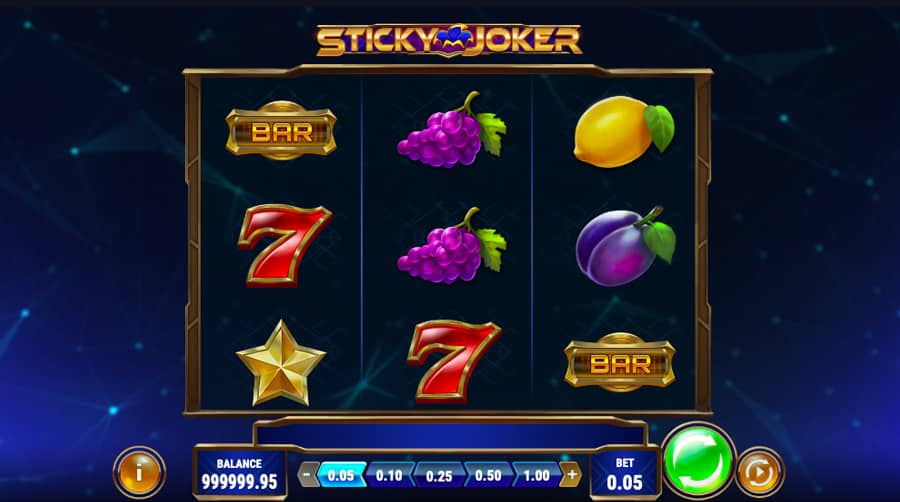 The range of bet options provide by Sticky Joker will appeal to all players whether low or high rollers. Sticky Joker nods its head in admiration to the makeup of fruit slots by choosing to have bets that start from just 5p per spin up to £100 per spin. In the background is the math model that cannot be described as providing high thrills! The developers have given this game a volatility rating of 6/10 in otherwise medium. The best percentage you can get with regards to the return to player is 96.74% however it is a lot lower on some sites therefore be sure to check the pay table before you begin playing to make sure you are playing the right one. The overall potential of this game is rather under whelming but the high RTP figures should help to boost its appeal for those who champion the classic fruit slot.

You will certainly get your five a day when it comes to the pay table, as here you can find the usual fruit symbols including cherries, grapes, lemons and plums which are then completed with the addition of bars, stars and lucky 7s. The 7s are the highest paying symbols and when you land three you will be rewarded with 5x your stake. There are only five pay lines and you can only create combinations of three of a kind.

In the same vein as the rest of the slot there are no surprises when it comes to the features. There are two features that are available in the base game and these are the only way you can expect to net any significant returns. The wild is depicted by the Joker and if you land three of these you are automatically rewarded with 8x your stake. The Joker can be on any position, and if you manage to land one or more, they will lock into place and activate the re-spin. Respin. If you then manage to land another wild in the re-spin this, then locks and awards you with another re-spin. If another wild lands during the respin, it is also locked and triggers another respin. You can continue to get re-spins until either your screen is covered in wilds or no more wilds land.

If you have four or more wilds in view when your re-spin comes to an end the Wheel of Multipliers feature becomes active. The Wheel is divided into twelve pieces each of which contain multipliers of x2, x3, x4, x5, or x10 on it. Once the Wheel ceases to spin the multiplier is added to the whole amount you have secured in the re-spins feature.

Sticky Joker would be nothing without the free spin feature. If you are not a fan of this type of slot it most certainly won’t do anything for you. There are occasions where a developer will inject a truly original feature or some high stakes to reel the players in, but this is not one of those games. The slot just relies on the basics and does exactly what is says it will. The best way to sum the slot up is a vibrant, fruity game that goes about its business at a reasonable pace.

If you are already a fan of this series, then you will undoubtedly be able to find your own form of entertainment. It is an easy, quick slot where you can land four or more jokers and a multiplier to create some fun. The best you can expect to win comes from a screen of wild jokers and a x10 which would then provide 400x your stake. Expanding on that further would be the official maximum win that is 1,650x your maximum bet. When you think that the potential in this slot over 100 million spins would be billions on other slots, so surely this is a big tick in Sticky Joker’s favour.
I thoroughly enjoyed playing Sticky Joker but if you are not a fan of this theme then this is not a slot that will change your mind. This slot will keep you entertained for a while until something new comes along and if you are not a fan you should just give this one a miss.