Avalon: The Lost Kingdom is the latest release from the developers at BGaming which invites players to become part of an exciting medieval fantasy adventure. The slot is set within in medieval England and predominately focuses on the tales of King Arthur. So, if you are ready to venture to the Lost Kingdom keep reading.

This slot has been designed to create a fantasy in which the developers have borrowed some elements from this genre of gaming. Whilst the characters are fantasy creations they have been created in a realistic way and there is no doubt that the slot provides a veritable feast of cutting-edge graphics and visuals that are truly stunning in design to capture the majesty of the story behind the game. The slot takes you into a totally immersive fantasy world that is complete with the legends of King Arthur, Camelot, and the Kingdom of Avalon. The characters are detailed and expertly executed with superb reel symbols for you to enjoy.

When it comes to the soundtrack it is all that you would expect and more although you may find that the sound effects that have been chosen to accompany the reels and symbols a tad irritating but this is not a problem as it is easy to turn them off if you want to. The soundtrack is best described as would be ‘generic fantasy RPG’, that you would find in a popular mainstream RPG like Skyrim. 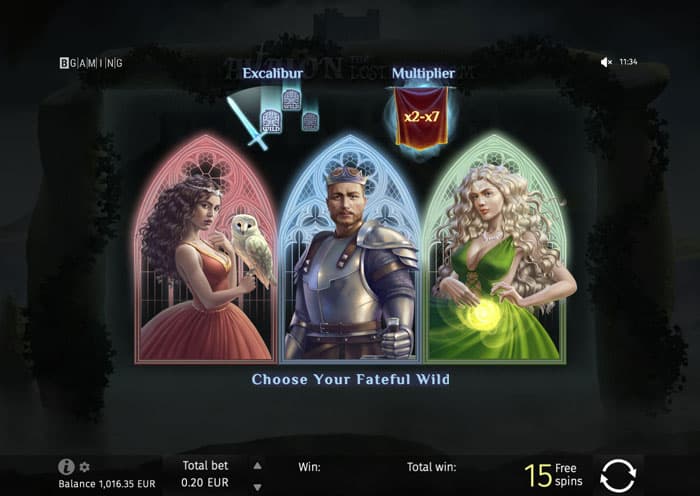 Avalon: The Lost Kingdom plays out on a 5x3 reel set with 20 pay lines. You can expect to come across the normal low value playing card symbols as well as a wild and scatter, however this slot does offer some exciting special symbols such as the legendary Excalibur and Fateful wilds. There are also free spins, bonus multipliers and a massive 5,000x your original stake. The return to player does let the slot down a little standing at just 95%.

Fortunately, when it comes to the pay table it is simple when compared to the other elements of this slot starting with just one bet adjuster, three pieces of information and two spin buttons. Once you are ready to begin select your total bet per spin and then press either the spin or auto spin buttons and let the game begin. When you land a win, the animation overtakes the screen and your total win will be shown in the central information box with your current balance shown on the far left.

This slot stands out thanks to the bonus features that are on offer and even the standard bonuses have been given their own features. The wild for example usually takes the role of substituting for all general symbols to create winning combinations, however in this slot it can also form its own winning combinations when it is delivered consecutively, and can provide a whacking multiplier of 800x multiplier. The scatter is represented by Excalibur set in its stone and this can lead to a reward of 10-15 free spins when it lands on your central reels, and when the free spin round finishes you will also awarded a random multiplier which will provide you with any amount between 2x and 7x.

The free spins also has its own special feature which sees it creating a mini game which consists of the Fateful Wilds feature where you can choose the character that you want to be wild for the entirety of the free game feature, and this can change during the game thanks to the Excalibur symbol which can transform more symbols Wild. 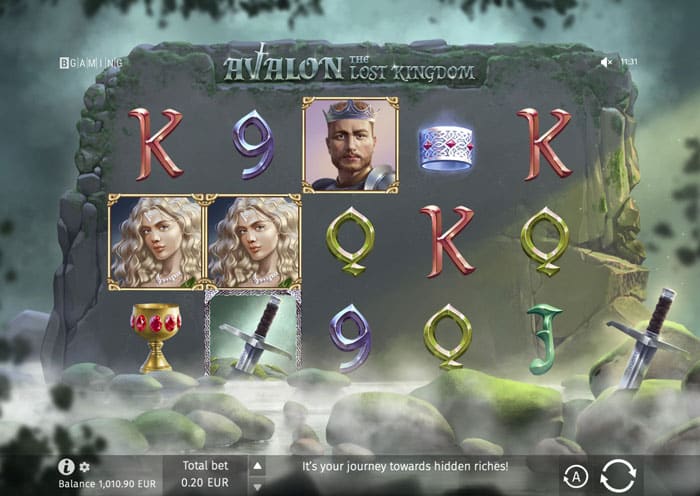 There are certain specifications in every slot that tells you how the game play works. Usually these specifications can be seen on the main game page, and the most important statistics to look at are the return to player and volatility because these give you an indication of the pay outs that you can expect to come across when you play the slot. The volatility is measured by this and many other developers on a scale that starts at 1 and runs through to 5 although usually only low/medium risks are shown. Slots that boast a low volatility means that you may land more frequent wins, but the prizes will be smaller and there is less risk whereby the higher volatility provides larger wins, bigger risk, and less frequent pay outs. This slot has been categorised as a medium/high rated game; so, you will find less frequent wins, but your rewards will be greater.

The return to player is the other important specification to look at as this tells you the fairness in the pay-out rates, and it also provides an indication of the average you can expect to win over a determined amount of spins. This slot has an RTP of 95% which is fair with most slots averaging 96%. This means that if you were to bet 100 on this slot you can expect to win back 95 over an extended period of play.

If you find the design and game play of Avalon: The Lost Kingdom to your liking you will be pleased with the similar slots that are on offer. If I had to provide a recommendation I would go for another hugely popular title Avalon 11 as both slots share a similar style and theme, and whilst they have the same feel, Avalon 11 does offer additional and different bonuses from Avalon: The Lost Kingdom, so you may want to give it a spin too.

This slot has a stunning design coupled with an exciting storyline which is themed around the legendary adventures. I really enjoyed playing this slot and landed some decent wins however thanks to the lower return to player and higher volatility it was a little harder to activate the free bonuses but when I did I was rewarded with some excellent winning combinations. This is a great slot overall that I feel will attract a great following due to the way it has been expertly created.