Beautiful animation, a fun main character, and a creative premise are the highlights of Sugar Glider, one of the latest free online slots from Endorphina.  The star of Sugar Glider is, of course, the Sugar Glider. Not only is the cute flying creature the highest paying symbol. It’s the Sugar Glider that flies across the screen and hits the grasshopper, producing big payouts for players.

Second to the Sugar Glider in staring for this game are the payouts. Players can win huge with frequent matches. But beware, a tempting double your money game could cost you everything if you’re not cautious in this 5 reel, 10 payline game. Sugar Glider is a fun experience for beginners and experts alike who appreciate a creative game that produces big payouts. 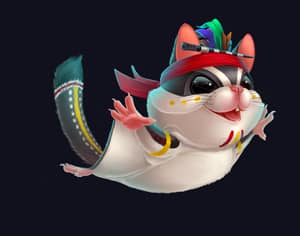 I debate whether the theme of this game is the forest or a garden. I slightly lean towards a garden as most of the symbols are fruits. This slot feeds off the fruits and gets its kicks from taking down the grasshopper. When the grasshopper symbol (or symbols) appears, the sugar glider flies across the screen and turns the grasshopper into a wild symbol. One of the best creations of this beautifully animated game is the black eyes that develop on the grasshopper after the Sugar Glider knocks him out.

Players start with 100000 credits. Players also have significant control over their bets, with players able to choose both the size of the bet and the number of paylines players play. Players can bet between 1 to 5 or 10 while choosing between 1 to 10 paylines. There’s also a double up game where players look to pick the higher value card to double up their winnings. 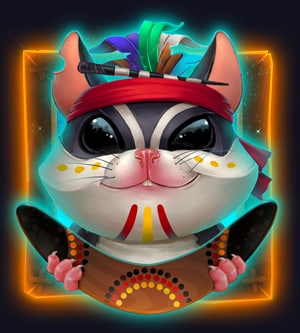 SugarGlider keeps it simple with its symbols. There are only 8 symbols in the game. Five of those symbols are fruit. The green fruits chime in with the lowest payouts. A fig and some random reddish orange fruit (not an orange, a different shape than an orange) produce the next highest payments. The highest payouts of the fruits come from the exotic pink fruit (a dragon fruit?).

Unfortunately, there is a steep drop-off from 5x to 4x. Numbers in the thousands drop to the hundreds for 4x, and drop down to 20 to 50 for 3x. The star symbol produces payouts equal to the dragonfruit. And, of course, the highest payouts are reserved for the game's symbol (200 for 3x, 1000 for 4x, 10000 for 5x). Keep in mind, that is not the Sugar Glider that flies across the screen, just the one who appears as a symbol. The last symbol is the grasshopper symbol. When the grasshopper appears, the Sugar Glider flies across the screen and turns it into a Wild Symbol.

You probably noticed I didn’t mention anything about free spin or bonus levels. That’s because Sugar Glider features none of that. It is one of the few online slot games that don’t feature a free spin level. So this slotgame makes up for it with colorful, creative animation and big, frequent winnings. Players will win quite often when playing Sugar Glider, so the key is betting big when it happens. Enjoy the bright colors, the cute main character, and the big winnings when you play Sugar Glider.

for playing with Sugar Glider: