iSoftBet’s third instalment in the series of Extreme Pays takes them completely away in a new direction; moving away from the mystical jungles of Wild Ape and the ancient times of Egyptian King, the London-based developers have taken a look upwards to the night sky for this brand-new slot. The results bring us this compelling slot that is more engaging than first glance.
Euphoria can come across as a cliched, generic slot but once fired up, the player is taken on a psychedelic trip, travelling through the stars with stunning velocity. As part of the Extreme Pays series, this slot offers high volatility with huge returns for the right player. However, moving away from the solid possibility of winning big, this slot is hard to put down.

A breathy ‘Euphoria’ starts up the action, taking the player swirling through the nebula, immersing them immediately into the brand-new gaming world. Unassuming to the eye, the galactic background is just pleasant, nothing special. The sounds that accompany dive the player into the world of sublime simplicity.

The gameplay is different but powerful in it’s actions, powered by a five-reel, three-row grid, a classic in the slot industry. Winning combinations are formed when three or more matching symbols appear on the reels, and these must be formed left to right. With a total of 243 ways to win, there is plenty of features to keep the player interested! 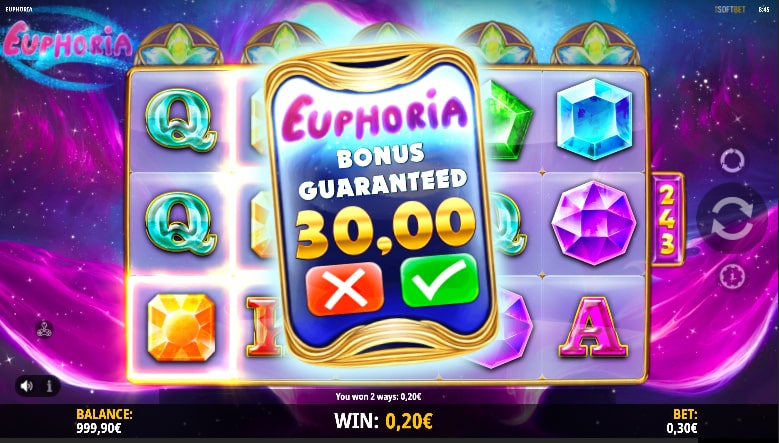 Betting for this slot is modest, starting at only 30p and continuing up to £30 per spin. While this may not seem like a lot, it enables all players to be in with a chance of winning. The word ‘extreme’ from the series title ‘Extreme Pays’ has particular connotations, and this slot does not disappoint. The highly volatile math model gives an RTP of 95.99%, which is more or less average for today’s slots, but it is the smallest of the Extreme Pays series. However, this slot does possess the highest potential of the three in the series.

The design of this slot is galactic and stunning, with plenty of stunning scenery to keep the player entertained. The aesthetical symbols are where the fun really begins; each of them are simple yet effective in each of their designs.

Starting at the lowest paying symbols, theses include the A, K, Q and J, alongside a stunning collection of precious gems. The gems are worth more than the royals: orange, green, blue, purple and diamond in colour. The final stone, the diamond, is worth approximately 13.3 times the stake for a pay line of five of a kind, and only requires two symbols to pay out for the player.
If you thought that the whirling background brought back memories from the Opal Fruits slot, developed by Big Time Gaming, then the symbols’ designs will reinforce this imagery perfectly. 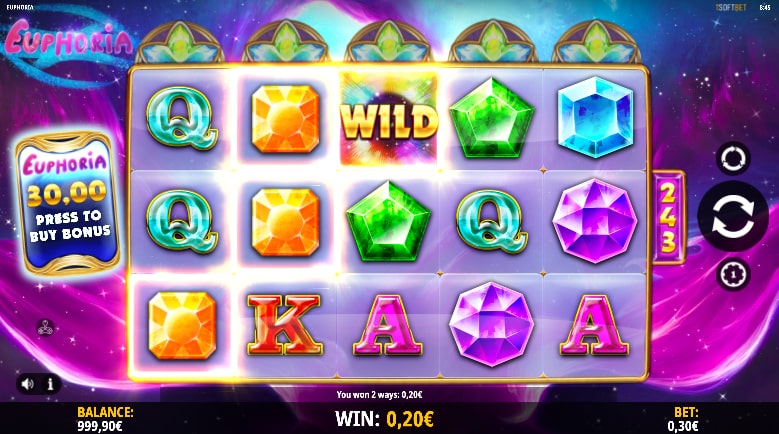 The key to unlocking the best potential of the slot is in the star symbols. The multicoloured symbol will not only act for the player like a wild but will also bring additional multipliers into the action. Three can appear at once during the base game which will therefore trigger the Euphoria Spins feature and the potential to win up to 27 times!
The Star symbol also plays a much-needed role in the Free Spins feature, which is activated by the logo scatter symbol appearing on the first, third and fifth reel simultaneously. Beginning at 8 free spins, whenever a star symbol lands, two things will happen. Firstly the multipliers are added to an overall multiplier which can get as high as 243 times. Secondly, there will be a meter above each of the reels which tracks the stars landing on the reels.

Each of the individual multipliers begin at x2 and can be bumped to x3 if another one lands on the reels. If star symbols land on all of the five reels, five additional free spins are given to the player as a reward to extend the feature. This can lead to incredible multiplying action for the player.

The player can also choose to activate the Euphoria Bet if it is available at the casino you choose. This bonus buy button guarantees three bonus symbols land on the reels on the next spin but comes with a price tag matching 100 times the total bet. While this is a significant amount, it is not completely overblown when you consider what other slots provide this option.

Without a doubt Euphoria is a luscious game that allows the player to feast on the surroundings with all of their senses. The explosion of colours and stunning galactic themes, this feeds the player’s imagination as they dive into the superb visuals and phenomenal audio which come together to form an experience like no other.

iSoftBet’s newest slot to enter the Extreme Pays series may be the most stripped back with no technical magic as some of the others but it does offer a no-nonsense, highly volatile slot with the potential to win up to 20,000 times the stake.
With one main feature, collect stars and win multipliers, this slot gives the player the chance to focus on one goal and work hard to achieve it, earning more money as they go. The stunning graphics and intricate designs gives the player an eye-watering slot with high volatility and plenty to win.

Players should tread carefully with this volatile slot, but do not waste any time in picking up this slot. The experience speaks for itself and we recommend everyone takes a spin on this Extreme Pays slot!