On the slot market today, there are dozens of slots that are based around the theme of Robin Hood and his band of merry men, and some people have begun to think that this theme has run its course and is coming to an end for the slot industry. From ones we’ve seen recently, we would tend to agree, however, this new slot by Play’N’Go has us taking our concerns with a pinch of salt.

Riches of Robin was made by the very best experts in the Play’N’Go company and shows them opting for 5 reels and 3 rows; a special feature of this being that each of the symbol places spins independent of one another, giving a total of 15 reels. This is very playable and may remind players candidly of the Sword and the Grail, albeit without the meter feature, or Double Lucky Line. Nonetheless, it is well crafted for the slot industry at the present moment.
Base level wins being on the left reel, the first reel, and are won if three or more symbols are matched. There is a total of 20 fixed pay lines for the player to win across. And with this slot being based on the legend himself, taking from the rich and giving to the poor, it would be nothing without it’s free spins bonus feature, offering the player their biggest wins here. 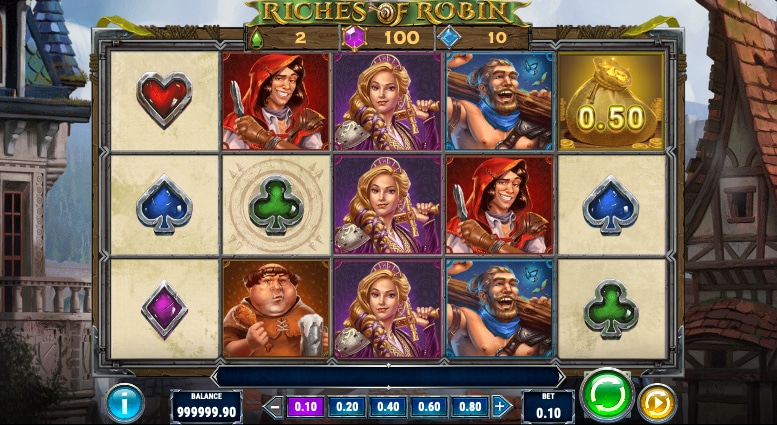 Play’N’Go have given some interesting artistry to Riches of Robin, which amps up the adventure, seeing all of the characters posed into some amusing postures and quirky facial expressions. This adds character to the slot, showing that it is not your everyday run-of-the-mill Robin Hood slot.

Robin Hood, who is played out to be the wild of the slot, and Maid Marian, the highest paying regular symbol, are the only two icons that seem to know what they are doing! The other characters include a minstrel who is happily strumming a lute, Little John the Strongman is holding onto a wooden pike, grinning as though he was about to battle the dukes and earls, and Friar Tuck, foaming pint in hand, ready to give anyone a seeing to! King Richard can also be seen on the reels.
The lower paying symbols are the card suits: diamonds, clubs, hearts and spades. These are all fashioned form stone and gem, adding to the Medieval feel of the slot.

The design of the reels ties nicely into the background, which appears to be Sherwood Forest, with spires poking above the reels, dwellings around. The musical soundtrack fits nicely to the adventurous nature of the theme and is suitably Middle-Age for our liking!

Betting and how to win!

The betting range for this slot is settled at 10p to £100 per spin, which is reasonable given the slots of today. This allows all players, both the beginners and the higher rollers the chance to win some big rewards from Robin himself.
Where the problem lies for this slot is the RTP, which can swing from a incredible 96.65%, to a measly 94.43% or lower! This can be adjusted according o the operator’s choosing, so check with the casino and the settings before throwing all your coins at it!

The volatility has been rated 10, which is the highest level for Play’N’Go, meaning you should prepare for some all or nothing spin sessions. However, there is the potential to win some solid cash prizes! Want to know how? We’ll tell you!

Winning for this slot is all about the matches you can make, and this is garnered through three or more of any matching symbols appearing on the grid. The higher paying category, as mentioned above is the cast of legendary characters. The most valuable to the player is Maid Marian who will pay up to 20 times the winning bet when matching five or more on a pay line. Robin Hood, the wild, will also pay 20 times the bet of the player for five of a kind!
Be prepared for some empty spins, with such a high volatility, but if you’re willing to hold your nerve there’s some epic wins to be had!

There is several features for this slot which push the dynamics of the game to a higher level of gameplay. The first of these is the Re-Spin feature, called Heist Respins, which will activate when four money bags land on the reel set. If this happens, the player is awarded three respins with only money bags as the icons for the spins. This is a typical money coin respin that we’ve seen in many other slots, with each additional money bag giving a further three respins. It ends with the player awarded the contents of the bags!

Next, we have the Quick Hit Bonus, which randomly activated, giving the player money bags with prizes of 20x, 100x or 1,000x their bet!
Finally, as mentioned at the start, we have the Free Spins Feature. If the target symbol for the player lands on either the second or fourth reels, this feature is activated. The player is then awarded between 8 and 20 free spins, as well as multipliers of x2 to x5. Additional target symbols landing gives 2 extra free spins, as well as a x1 multiplier, capped simply at x10.

With all being said this slot has a lot to offer any player who stumbles across it. With the Robin Hood attitude, as well as the Quick Hit Bonus and all the other features, we think this slot is an incredible addition to the Play’N’Go repertoire.
With maximum wins set at 10,000 times the stake, this slot gives the player an incredible opportunity to win, while enjoying some quirky graphics and stunning gameplay. A highly entertaining slot, we would consider Riches of Robin one of the better Robin Hood themed slots on the market today, providing excitement and enjoyment for all who play.