Pink Elephants 2 is one of the latest slots to be released from the gaming department at Thunderkick and although the slot may appear to be low on upgrades from the original, however the new math model makes if different from the first and a great deal of fun.

There is no doubt, but it is difficult for any developer to create a sequel. This is particularly true when the first in the series was a huge hit, as there is a readymade audience have keen players waiting to play. The game department are left with a conundrum hello should they take the players on A new game that they could really enjoy or do they playthings safe and here is the original with just a few different elements. The only problem is that the developer will come under some form of criticism whichever way they go. 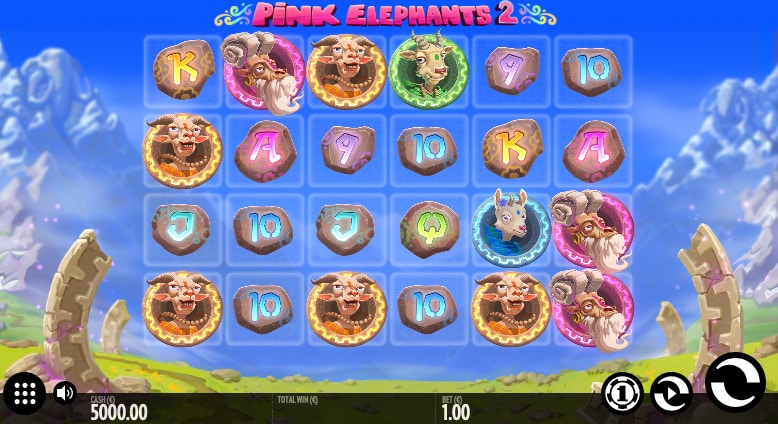 As soon as you open the game you may feel a little underwhelmed as at this point it could easily be a clone of Pink Elephants. For example the game is played out over 6-reels, a 4-row grid and although it is not set in the desert it still shows the same style of design technique even though it is made up of stars, mountains and a grass field that looks as though it is covered in broken Stargate's. The name of this slot is well represented and has visuals to suit.

When it comes to gameplay, the bet range starts at just 10p per spin up to a maximum of £100 per spin. The return to player rate is like the original and stands at 96.13% however, there is one significant change, and this is in the volatility which is slightly lower than the previous game. Thanks to this you will expect you can experience a more balanced game which goes hand in hand with the increase in your overall win potential.

When it comes to the symbols, the premium symbols are created by a tribe of goats which have been named after the colours blue, green, orange and purple. This is a rather obvious choice considering the mountainous setting of the slot. The highest paying symbol is the mythical pink elephant and landing six of these will reward you with 10 times your stake.
The rest of the symbols that you will find on your pay table comprise of the usual playing card symbols which range from 9 through to Ace, which are represented on large chunks of grey rock. In order to create a win, you need to match at least three of the same symbols running from left to right apart from the elephant where you only need to land two. The winning symbols can land anywhere on your screen and because of this there are a colossal 4,096 ways to win. You will also come across a pink W which is the wild, and this symbol can substitute for all the others to create winning combinations. This is the most you can do during the based game other than waiting for the bonus game to become active.

Pink elephant 2 offers some good gameplay and a great free spin feature that enhances your chance of winning. In the free spins, the symbol you will need to land is the golden peanut which is the games scatter, and this symbol can land anywhere on your reels. Landing 3, 4, 5, or six anywhere in view will see you activate the bonus game and be rewarded with 7,11, 15, or 19 free spins, respectively. As in the first slot in this series the random mystery scatter symbol feature will help you out no end as this can be activated at random when playing the main game and will add one to five scatters to your reels which increases your chances of hitting the bonus game.

Whilst you are playing in the free spins, you will see elephant orbs appear on your reels for you to collect. the orbs are added to a meter which is located on the side of the reels next to the four goat symbols. Once you fill a meter the respective goat will be upgraded to the next one displayed on the pay table. Once you have landed all four symbols the goats change into the pink elephant symbol and the game really gets going. That is another bonus as whenever you fill a meter it adds a free spin to the bonus game. The Golden peanut scatters remain in the bonus game Ant landing 2, 3, 4, 5, or 6 will award you with an additional 3, 5, 7, 9, 11 extra free spins.

I really enjoyed pink elephants two the slot, the best way I could describe it would be like taking my car hello and giving it a total overhaul to make it into something new. Whilst the slot pink elephants 2 may not seem that far away from the original, the alterations that have been made are enough to please any dedicated gamer. Whilst the visuals are not far away from the original the new characters and setting is more than enough to make this a stand-alone slot.

Although the volatility in this game is slightly lower, the maximum potential has been increased. The pink elephant has certainly been chased in a way you would expect from a cartoon until it's bright red and pouring with sweat! The first pink elephant game provided the capacity to win up to 8,200 times your stake whilst this version can see you landing 10,000 times your stake. Even though this may not be a huge difference it will certainly be enough for fans of the original title to want to give this one a spin.

Pink elephant 2 is well crafted and great looking game it offers good gameplay have a mediocre base game with huge potential during the bonus game. If you were a fan of the original the chances are you will love this one too.