Crusader from the developers at ELK studios and whilst it offers an expanding reel feature, the slot would be far better had they not decided to cap the potential. There are 98 ways that you can win, and Crusader includes features that are complete with re-spins, free spins and full reel nudging wilds.

Meaning of the Slot

Crusader is a serious slot that focuses on the last effort made by the Crusaders whilst Edward 1 was on the throne. The Crusaders are trying to hold Acre in 1291 against the Mamluks, but I know what you are thinking, who are or were the Mamluks? The Mamluks were apparently a group who ruled Egypt in Syria from the 13th to the 16th century, until the Ottomans arrived to take hold of the reins and get rid of the Mamluks. Now you will see that the slot is not about trailing across Europe to the Holy land, collecting coins as they go.

Crusader borrows elements from previous ELK Studios releases for example the historical theme and expanding reels but apart from this it is unique with an original theme however the theme has been used before in the Valletta Megaways from Blueprint Gaming. Unfortunately, the Crusades often failed to support their romantic connotations, instead the life of the soldiers tended to alternate between starvation and being beat up by the heathens whilst they struggle to survive in diseased ridden holes. So, if you’re ready let’s crack on.

Just so you are informed the Crusaders did not hold onto Acre from the enemy and this battle wad the turning point for the entire Crusade adventures that did continue but with dwindling results. This is a truly dismal theme, however the developers at ELK have captured the entire essence perfectly. The background of the slot shows a fortress that is sitting high on a hill at night with dark and sombre red tones. Generally, the graphics are good, but this is not the finest work presented by ELK Studios.

On the technical side the slot plays out over 5-reels, 4-rows and 26 pay lines, and this does extend when in the bonus game, but we can look at that further in a moment. To start the game, you need to select your bet amount that can be as little as 20p per spin to a maximum of £100 per spin. If you don’t fancy these amounts you can always activate one of the four pre-determined betting strategies that ELK have pre-programmed.

The pay table is encrusted with gold and feature religious themed symbols of the Crusades. Barring the low paying symbols which are the usual playing cards Queen through to Ace and these have a knight style font to ensure they are in keeping with the theme. The higher paying symbols include three separate cross symbols, a dagger, a box and a chalice/grail. The chalice is the most valuable symbol and when you land five you are rewarded with 10x your stake. All the symbols can land stacked as can the wilds that can substitute for all the other symbols to create winning combinations.

ELK Studios are known for their transparency when it comes to the numbers, but this is great for players as they know then where they stand. The key statistics and facts plus the game’s math model sees the slot set at 8/10. This does suggest that the game does offer a high volatility which is defined by the official hit rate of 21.2%, however when I tested the game I would say that this figure is rather generous, but on a more positive note the return to player is a solid 96.1% which evens things out nicely.

The features that are on offer in Crusader all involve the Crusader symbol in one way or another. The first thing that you should heed is that the Crusader is the games wild and as such it can substitute for all the regular symbols. The wild will only appear on your 1st or 5th reels and it will land either partially or completely in view. If the wild is in partial view it activates a re-spin for every position that it is nudged up of down to bring it into full view. If you land two wild Crusaders cover both reels one after another, they will activate the 8 free spins.

When you play the free spins the wild Crusader on the outer reels remain locked in their place for the entire feature. There is also a new symbol that comes into play, this is the arrow which is the Expansion Symbol. Whenever you land this symbol it will award one free spin as well as adding an additional row. The grid can only be made up to 12 rows in height, and this also increases the ways in which you can win to the maximum of 98. 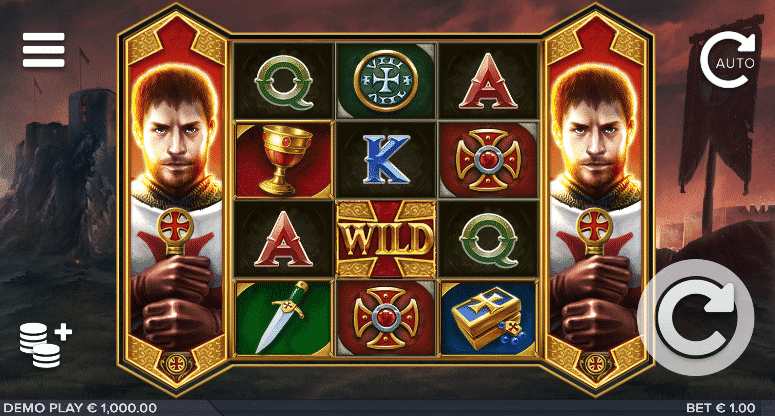 Crusader can take a while to get your head around and will provide many dead spins and small wins until the feature kicks in to provide some real action. However, when they do kick in, they can be useful however the nudging wilds don’t really add much change to the game, and in my opinion they are included to keep your bankroll buoyant and provide some fun before the main event begins. The Crusader wild also has a habit of tending up on the 5th reel which makes it harder for landing wins than if it was from the 1st reel.

Things do get interesting if you manage to land both of the Crusaders symbols, however this is one statistic that seems to have been missed from the game sheet, but the full potential of the slot can be unleashed during this bonus game and you have the opportunity to win 980x your stake from a single spin provided that the grid is full with the chalice symbol.
With locked wilds on the 1st and 5th reels you can watch your wins pile up, and the bonus round can be fun, and the expanding reels feature was more exciting and effective that in some of ELK’s previous offerings. The overall potential is a bit of a let-down as the prize is limited to 2,500x your stake.

Eventually, the Crusaders lost Acre and ended up stumbling across Europe and the same could be said of the slot. At times the slot appears to put up a valiant fight, but the slot really could have done with being more heavily armed. The features could have been more honed, or maybe adding something extra or not capping the potential could have all made this a far better slot. After all, once you have played the bonus round and see what it can do and it is all too easy to stand up and walk away.