Fly in the lap of luxury with Fugaso Airlines, a slot game created by (of course) Fugaso. The still images are well drawn, particularly the scantily clad flight attendants showing off their exceptional assets. There’s not much in the way of moving images (outside of the slot reels themselves) or differing levels in Fugaso Airlines.

But this 5 reel, 45 payline game includes bright colors and visuals features over 3,000 different ways to win. And the players can access three large jackpots on the bottom of the screen that should keep them betting throughout. So enjoy your flight as you press your luck with Fugaso Airlines.

Luxury flying is the theme of Fugaso Airlines. The background is a luxury lounge inside a futuristic flight. Comfortable, roomy seats with a bar sits behind the slot reels. There’s also a large window with a great view. Well, it would be a great view if the reels weren’t in the way. So you can pretend you’re a passenger looking out over the landscape as you fly. And then there are the flight attendants.

Fugaso doesn’t pretend to be playing to all audiences. The two flight attendants are both wearing tight, short dresses that expose significant amounts of cleavage. One is blonde and the other is Asian, so there is a girl for most everyone. The blonde in the blue dress holds the multiplier bar, while the Asian in the red dress holds the free spin meter. More on how to fill those meters up later. The background will change behind you with the more success you experience. And the attractive flight attendants open champagne for you when you record a big win or a mega win.

Players start with 300000 credits in the demo mode. The 45 paylines are fixed. The only portion of the bets players can set is the coin value, which move between 0.01 and 1. Players can run autoplay for up to 100 spins. There are numerous settings players can set autoplay for outside of the number of spins. You can stop autoplay on any win. You can also stop autoplay after single wins. You can also set a winning and losing amount before autoplay stops. And the game will require you to set a max loss amount in order to run autospin.

Fugaso Airlines features 10 symbols. The low win symbols include the luxury seat and credit card (same value), plane ticket and sandwich (at the next pay level), and two futuristic pieces of technology at the highest level. One of them looks like a futuristic tablet screen. Higher wins come from the virtual reality goggles, virtual suitcase, electronic coffee cup, and the servant robot. When players win, they activate yellow energy balls that break covered slots (yes, you will start with 12 reels blocked).

The next spin will happen with each of those uncovered. As long as you keep winning, more reels will be uncovered. The girl in pink collects pink energy balls that, once you hit five, give you a free spin (or extra flights as they’re called in this game). And once all the block reels are unblocked, players can access blue energy balls. The blue balls increase your multiplier and are collected by the girl in blue.

Great animation and unique game play might be enough to keep players interested as they play Fugaso Airlines. The two flight attendants may come off to some as objectifying to females. For others, they might be the main attraction. But for players who play with patience will love and appreciate the increasing multipliers and large jackpots available on Fugaso Airlines. 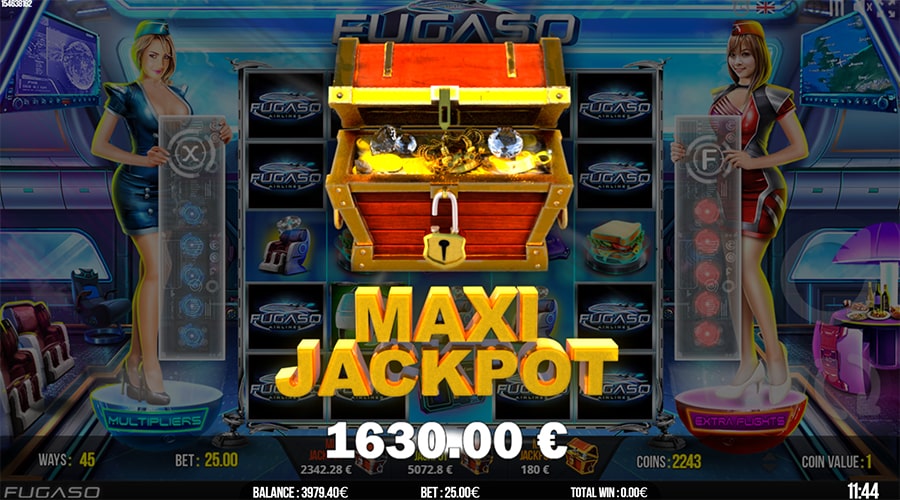