Travel to the mysterious African jungle in this new release from NetEnt. Not only will you encounter some terrifying apes, but you may also come across some amazing prizes. Indeed, the principal draw of this game is its top payout which is a staggering 45,126x the stake. For many players, this alone would be enough to play this fantastic game; however, it gets better. Several exciting features are built into this game that adds layers of novelty to the already pulse-intensifying slot. With 1,204 pay lines, four bonus features and a top payout that any player would be enticed by, this is a very promising product from the established NetEnt studio.

The features for this game start with the Silverback Attack feature, which is randomly triggered at any time in the base game. When triggered, between six and twenty lucrative Silverback icons are randomly deposited onto the reels. The second feature is the bonus game, triggered when players land three or more scatter symbols anywhere on the reels. This is a re-spin game that can potentially gain you access to the free spins game. The final feature is the free spins game which takes place after the bonus game and incorporates a token system that can upgrade your spins. All features will be explained in greater detail later on in the review.

The theme for this game is African jungle, with the main character or animal being the mighty and reclusive silverback gorilla. The silverback is the largest of the primates and lives in the tropical forests of equatorial Africa. Although this is irrelevant for the game’s purposes, it is interesting to note that an adult silverback gorilla can weigh up to 270kg. The angle that NetEnt has taken with this game feels quite Indiana Jones-esque.

The background for Silverback Gorilla is a dense and treacherous looking rainforest landscape, one that is the rightful home of the famous apes. The detail from the shafts of light peaking through the canopy to the dense undergrowth and vines is superb. What is especially impressive is how the designers have given the background a profound sense of depth by using layers upon layers of different plants and shadows.

The playing board has been constructed from the jungle itself, made entirely from vines, flowers and wood.

The symbols for this game are split into high-value, low-value and special symbols. The low-value symbols for this game are the 9, 10, J, Q, K and A in playing card royals. These icons pay up to 1.5x the stake for the top combination. On the other hand, the more valuable symbols comprise the various animals. These include the hummingbird, the snake, the Leopard, the crocodile and finally, the silverback gorilla. The most valuable symbol, however, is the golden silverback gorilla. This icon pays out at 8x the stake for the top combination. Finally, the specials are the sunset wild, the golden shield scatters, and the token icon. 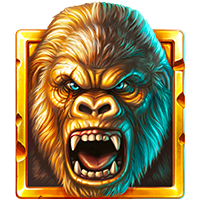 Silverback Gorilla is played on a 5-reel, 4-row machine with 1,024 fixed pay lines. To win combinations, players must land three or more matching symbols on pay lines moving from left to right, starting from the leftmost reel.
The betting range for Silverback Gorilla is 10p to £100 per spin. To adjust their bet levels, players can toggle their stake up and down using the tool located at the bottom left-hand side of the screen.

Further information, including a short tutorial and a display of the paytable, can be found via the menu button in the right-hand corner of the screen. The spin and auto spin buttons are located in the centre of the screen.
Volatility for this slot is rated in the high range. The return to player percentage for Silverback Gorilla is 96.1%, which is average. The biggest payout that players can win on one spin is 45,126 x your stake.

The first feature in this game is the Silverback Attack feature which is randomly triggered during the base game. When activated, between six and twenty high-value silverback icons descend onto the reels, helping you score more valuable wins.

The second feature is the bonus game, triggered when three or more scatter symbols land anywhere on the reels. These scatters are then locked in place, and you are awarded three re-spins to play. In this bonus game, only tokens can land on the reels. When a token lands, it will reveal a value. Every time a new token lands, it will also rest your re-spin count to three. This feature continues until you either exhaust the re-spins granted to you or all of the available positions on the board get filled. When the feature comes to its end, all of the token values are accumulated and paid out in one lump sum.

The penultimate feature in this game is the free spins feature which takes place after the bonus game. The more scatters you used to trigger this bonus, the more spins you will be allowed to play with. During the free spins, your goal is to fill the collect meter with tokens, which will then upgrade the symbols on the board, giving you more lucrative wins. Collecting 300 tokens upgrades the silverback gorillas to gold gorillas, the most valuable icon in the game.
Finally, there is also a bonus buy feature. However, this option is unavailable in the UK.

Silverback Gold is a really exciting game, with a lot of novelty and a decent winning potential, making it both a fun and rewarding game to play. The negatives for this game are few, yet the high variability will mean that features don’t trigger quite as often as players might want them to.

Is there a free spins round for Silverback Gold?

What is the betting range for Silverback Gold?

What is the return to player percentage for Silverback Gold?

What is the volatility for Silverback Gold?

for playing with Silverback Gold: