for playing with Charlie Chance and the Curse of Cleopatra:
TAGS Latestmost-popular

Charlie Chance and the Curse of Cleopatra Overview 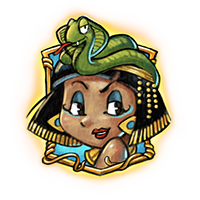 Charlie Chance, the Chaplin-like character, is back in a new Egyptian themed adventure that takes players deep into the tombs of the Pharaohs to discover hidden treasures. Designed by Play ‘n GO, Charlie Chance and the Curse of Cleopatra is a high-quality game in both looks and function, played out on a 6x6 square with a cluster pays dynamic. You will immediately recognise it as a Charlie Chance slot because the majority of the screen is in black and white, and the soundtrack sounds like something played over a 1930s’ Disney movie.

Regarding bonus features in this game, there are quite a few. These begin with the cascade feature triggered when you register a win on the reels blasting the winning symbols off the board to be replaced by a fresh set. Get more than three consecutive cascades, and the game will bring in a multiplier bonus. This game also has what it calls a flying scarab wilds feature, which is triggered randomly and deposits between 5 and 8 wilds onto the grid in random positions. This game also has a bonus trail, mega symbol and free spins bonus. All bonus content will be explained in greater detail later in the review.

The theme for Charlie Chance and the Curse of Cleopatra is one of Egypt and, more specifically, the story of Cleopatra. Cleopatra VII is one of the most famous rulers of Ancient Egypt. She had a reputation for being intelligent and having an exotic beauty known across the land. Her romantic liaisons and military alliances with Roman leaders were some of the most valuable relationships over her years as ruler. The most notable being her dalliance with Mark Anthony. In regards to the game, not much of this story comes across, as Cleopatra is represented by a black and white dancing cartoon with her trademark asp atop her head.

The background for this slot is the entrance to a vast and imposing Egyptian temple with large columns and treasures spilling around the entrance. This being a Charlie Chance game, the background is in that specific black and white tone that makes it look like an old romantic movie from the 40s’. When focussing on ancient Egypt, Game designers always seem to go for temples and pyramids when planning backgrounds, as it is here historically that all of the valuable treasures and artefacts were found by archaeologists. And what are players doing here if they aren’t looking for exciting prizes in the ruins?
The board for this slot has been designed to be incorporated into the structure of the temple as a kind of gateway. The symbols seem to sit nicely in the stone construction.

The symbols in this game are comprised of a catalogue of hieroglyphs, ranging from the low-value river and bird symbols to the more valuable scarab and eye of Horus icons. There are eight of these symbols in total. They range from 20x to 500x your stake in terms of value. The most valuable icon in the game is the cat god Bastet symbol. However, to get that top payout of 500x the stake, you will need to land 15 or more of the symbols in a cluster. The specials comprise the golden beetle, which is the standard wild icon. Joining these symbols are the Charlie Mega wild and the Cleopatra symbol, which represents the scatter.

Charlie Chance and the Curse of Cleopatra is played on a 6-reel, 6-row grid. This game is played with a cluster pay mechanic, meaning to win combinations, you must land clusters of five or more matching symbols on the board.

The betting range for Charlie Chance and the Curse of Cleopatra is 20p to £100 per spin. To adjust their bet levels, players can toggle their stake up and down using the tool located at the bottom left-hand side of the screen.

Volatility for this slot is rated around the medium range. The return to player percentage for Charlie Chance and the Curse of Cleopatra is 96.25%, which is just over average. The biggest payout that players can win on one spin is 5,500x your total stake.

There are five features in this slot game. The first bonus is the cascading reels feature. When you form a win in this game, the winning symbols are removed from the board and immediately replaced by a new set. If the new set also scores a win, then the dynamic will continue. The feature only ends when a new set of symbols does not register a win.

A multiplier will be brought into play if you manage to score three of these cascade wins in a row. This can increase to a maximum size of 3x. However, players should watch out for the free spins as the multipliers can grow even larger in this round.
The next feature in this game is called the Flying Scarab Wilds feature. It is triggered completely at random. Once it is activated, between 5 and 8 wilds are added to positions on the reels. After this bonus has played out, a new payout calculation will be made.
The third feature included in this game is the Serpent’s Trail feature.

You will randomly trigger this feature sometimes after a non-winning spin. When it triggers, a snake will wind its way across the board, creating a little trail. The trail will then disappear, or each symbol touched by the snake will transform into the same symbol, helping to create a new winning combination.
Penultimately, this game has Cleo’s Column feature. This is triggered randomly on any spin. When it is, two reels will display matching symbols, enhancing the chances of you creating bigger cluster wins.

During this feature, you may also benefit from the Charlie Mega symbol. This icon locks in position for one cascade. Any low-value symbols adjacent to this symbol are chucked off the screen, with new symbols replacing them in the next cascade.
After this sequence has played out, the Charlie Mega symbol changes into a Charlie Mega wild, an icon that can swap in for any symbol barring the scatter.

Finally, we have the free spins game. This bonus is triggered by landing three scatter symbols on the same spin. This provides you with eight free spins. Every scatter that lands on the triggering spin adds another 4 spins to the free spin total too.

With plenty of good RTP features and a fun old-school theme, this game makes for a lucrative and entertaining slot that delivers on almost every front. The only slight drawback here is the relatively low top payout. However, if players are aware of this, there shouldn’t be any nasty surprises.

Frequently Asked Questions Charlie Chance and the Curse of Cleopatra

Which studio developed Charlie Chance and the Curse of Cleopatra?

Is there a free spins round for Charlie Chance and the Curse of Cleopatra?

Yes, with modifiers to boot.

What is the betting range for Charlie Chance and the Curse of Cleopatra?

What is the return to player percentage for Charlie Chance and the Curse of Cleopatra?

The RTP for Charlie Chance and the Curse of Cleopatra is 96.25%.

What is the volatility for Charlie Chance and the Curse of Cleopatra?

for playing with Charlie Chance and the Curse of Cleopatra: