for playing with Legend of the Ice Dragon:
TAGS Latestresponsive

Legend of the Ice Dragon Overview

In this new game from Play' n GO, players will have to scale a frosty mountain to meet with the powerful and dangerous Ice Dragon, a mythical creature that guards great bounties of treasure. His fortress is only to be entered by the bravest and luckiest amongst us. This fun and high-quality game is a cluster pays slot with loads of pay lines, a great top prize and plenty of exciting features. Will you take on the intimidating dragon of the north and come away with prizes beyond your wildest dreams? Only by spinning the reels will you find out.

The features in this game start with the obligatory cascading reels feature, which accompanies most cluster pay games. This feature is activated every time that a player triggers a win. Winning symbols are then jettisoned off the reels and replaced with a new set from above. The cascades will continue until the new set does not trigger a win. There is also the Ice Frame feature which involves increasing multiplier squares and the freezing features – a trio of bonuses that include changing symbols and a host of other modifiers. Finally, there is the Icy Crystal features, which again enhance play through a variety of modifiers. All features will be explained in detail later on in the review. 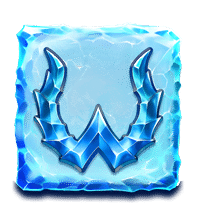 Players are transported to a mythical fantastical realm in which the Ice Dragon reigns supreme. From the looks of the dragon's styling and the distinctive mountain shapes in the background, it is fair to say that the inspiration for this specific theme came from the Chinese interpretation of mystical dragons. The dragon is an important symbol in China, with connotations of power, authority and confidence. The dragon in this game isn't the typical dragon, as they are comfortable in the snow and ice of the highlands and are styled to that effect. The combination of high-quality graphics, the highly detailed dragon and the surroundings really transports players to this exciting new environment.

The background for this game is the blizzard-like northern reaches of the dragon's mountain top home. All around the screen are snowdrifts, craggy mountain peaks and mysterious shadows that add an element of an enigma. As mentioned, the tall thin, separated mountains are typical of those found in northern China, giving this game a real-world comparison. However, the highlight of the background and indeed of the screen as a whole is the dragon itself. Its frozen body, dramatic horns and piercing blue eyes all make for a fantastic visual feast and draw players into the game.

The playing window for this game is a standard cluster pay board with loads of symbols. The edges of which have been made to look frozen, which makes it fit with the rest of the screen's aesthetic.

The symbols for this game are split into low-paying, high-paying and special symbols. The low-value icons are the playing suit symbols of hearts, diamonds, clubs and spades. The more rewarding symbols, however, are the dragon eye, the flames and the crown icons. The dragon eye is the most valuable of these, paying 3x the stake for a cluster of five symbols and 500x for 30 or more. Special symbols comprise the wild – the frozen W.

Legend of the Ice Dragon is played on a 7-reel, 7-row cluster pay machine. To win combinations, players must land clusters of five or more matching symbols.

The betting range for Legend of the Ice Dragon is 20p to £100 per spin. To adjust their bet levels, players can toggle their stake up and down using the tool located at the bottom left-hand side of the screen.

Volatility for this slot is rated in the very high range. The return to player percentage for Legend of the Ice Dragon is 96.29%, which is above average. The biggest payout that players can win on one spin is 6,000x your stake.

The first feature in this game is the cascading wins feature, triggered every time a win is registered. The winning symbols are taken off the reels and replaced by a new set, with a new payout calculation being made.

This feature gives you more chances to score wins from the same spin. The cascades will only stop when a new set of icons does not form a win.

Next on the bonus list are a set of features called the freezing features. Any winless spin in the base game could trigger one of the following:

• The Hailstorm Feature – One symbol is identified at random. Then three iterations of this symbol, plus five adjacent symbols, are turned wild or destroyed, creating a cascade.
• The Avalanche Feature – This modifier selects two symbol types at random. All iterations of this symbol are then removed, with between three and seven wilds appearing in the newly vacant positions.
• The Blizzard Feature – Between two and five icons change into wilds. Any icons that don't turn into wilds are destroyed.

Finally, we have the Ice Crystal features. When you land a winning cluster, the symbols in that combination are added to the Ice Crystal Charger on the left-hand side of the screen.

Collecting various numbers of symbols in an unbroken stream of cascades triggers certain features. These are explained below:

• The Ice Scorch Feature -Collect 40 icons, and between three and six icons will turn into wilds.

• The Destruction Feature -Collect 60 icons, and all low-value symbols will be removed from the reels.

• The Dragon Blast Feature – Collect 80 icons, and all ice frames on the board will turn wild, as well as their multipliers.

For every ten symbols collected over the threshold of 80, 2 additional ice frames are added to the board.

Fantasy Dragon fun is the name of the game here. Even if you don't like the exciting dragon theme or graphics, there is plenty to get involved in terms of features and a top prize few would be disappointed in taking home. Play 'n GO has done a top job with this slot from start to finish.

Which studio developed Legend of the Ice Dragon?

Is there a free spins round for Legend of the Ice Dragon?

No, but there are plenty of other features available.

What is the betting range for Legend of the Ice Dragon?

What is the return to player percentage for Legend of the Ice Dragon?

What is the volatility for Legend of the Ice Dragon?

for playing with Legend of the Ice Dragon: