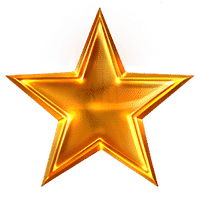 Stars & Fruits Double Hit is a new hybrid slot designed by Playson with fun features and a classic look. We say it’s a hybrid slot because it combines the old-school look and feel of slot machines from the classic era of fruity games, with the new and exciting realm of digital bonus features. Released roughly a month ago, Stars &Fruits Double Hit has been met with a warm reception as another great slot in Playson’s Double Hit range. The Double Hit aspect of this game’s title refers to the two sets of reels that player’s see when they open the game.

This double game window layout is one of the key features that ups the interest and playing value of this game. Although there are two sets of reels, hitting the spin button spins both of them at the same time. By having these expanded reels, players are double as likely to come across a win than when playing a traditional 5 by 3 game. The key to the bigger wins in this game is the golden star scatter bonus feature. This rewards players for collecting scatter symbols with cash prizes.

There are a few style choices that Playson has made here, however for the most part they have tried to keep the look as clean and minimalistic as possible. The background for this slot is a plain red geometric design, its purpose is to make sure that the symbols are the star of the show.

This slot is part of a collection of new games that Playson has produced which have very few visual elements. This new collection is a response to a growing groundswell of players who are becoming exhausted with the over-stimulating, over-designed modern slot machines which favour choking a game with features and visual imagery in a bid to entice players in.
Stars & Fruits Double Hit as well as Playson’s other games 3 Fruits Win Double Hit and Hot Coins Hold and Win are the antidote to this phenomenon. From the title to the symbols to the sound effects, everything has been simplified, stripped down and refreshingly calmed to offer a purer and easier to follow gaming experience that steers away from the over-saturation of other slots.

Talking of symbols, the symbols for this game are a classic selection of fruit icons that are inspired by the original fruity games. These comprise lemons, cherries (the lowest paying symbols) plumbs, oranges, grapes, watermelons and red 7s (the most valuable normal symbol). The special is the scatter which is the gold star. This is the most valuable symbol in the game and can land you a huge 5,000x your stake win.

Stars & Fruits Double Hit is played on a double playing board, each window with 5 reels and 3 rows. However, they will all spin together when you hit the big yellow spin button. There are 10 bet ways in total for this game. To score wins players need to match a minimum of 3 symbols across pay lines in formations travelling from left to right across the reels.
The betting range for 3 Stars & Fruits Double Hit is 40p to £100 per spin. To adjust their bet levels players can toggle their stake up and down using the tool located at the bottom left-hand side of the screen. Further information, including a short tutorial and a display of the paytable, can be found via the menu button in the right-hand corner of the screen. The spin and auto spin buttons are located in the centre of the screen.

Volatility for this slot is rated to be around the medium range. The return to player percentage for Stars & Fruits Double Hit is a little under average at 95.6%. The biggest payout that players can win on one spin is 5,000x your current stake.

As we have already established, Stars & Fruits Double Hit is not saturated with features. Apart from the double table set up of this game, there is only one other feature. This feature concerns the golden stars scatters which payout separate wins to the normal wins for a collection of 3 or more on the reels. The scatters don’t need to land anywhere specific on the reels to pay either.
The number of scatters landed on one spin determines the size of the payout.

The real do or die fans of slots will enjoy this simple and hard-hitting game from Playson. The double-decker reels are a fun adaption to a normal game though. The golden scatters bonus is where the pay-outs for this slot are though, players just need to keep a beady eye on those tempting little stars. Playson has not messed around here, this is an injection of pure and unadulterated slot spinning pleasure.

What is the betting range for Stars & Fruits Double Hit?

What is the return to player percentage for Stars & Fruits Double Hit?

What is the volatility Stars & Fruits Double Hit?

Can I play Stars & Fruits Double Hit for free?

Yes, there is a demo version of this game available to play on most online casinos.